Why I Wrote Me And A Guy Named Elvis by Jerry Schilling. 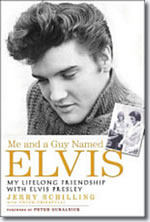 Elvis Presley may be famous for his pelvic thrusts and never ending sideburns but a new book is all set to reveal that he had a passion for practical jokes too.

According to the New York Post, in Me and a Guy Named Elvis, which hits stores next month, author Jerry Schilling, a key member of Presley's Memphis Mafia, recalls one night when John Paul Jones of Led Zeppelin stopped by with a few friends to meet Elvis and found him decked out in pajamas.

John burst out laughing. Nobody accepted Elvis' offer." Elvis loved to tweak performers who did his act. One night in Las Vegas, he passed a lounge where a burly singer was "overdoing the Elvis vibrato just a bit," the author says.

'Without breaking stride, Elvis . . . stormed into the lounge, walked right up onstage, hoisted his cane like he was going clobber the guy and said, 'If you're going to do it, do it right.'

He gave the crowd a great big wink, hopped off-stage, and zoomed right out of there. But the big singer didn't see the wink - he'd been so startled that he'd fallen off the stage."

One habit of Elvis' that was not a joke was his insistence that his own music never be played inside Graceland. Schilling remembers one day when somebody put on All Shook Up during a party.

"Who's the wise guy that put that goddamn music on? Get that crap off!" Presley roared. "There was no doubt he was really angry," Schilling writes. "He was proud of his work, but it was just that - his work. He lived with his music outside of the house - he didn't need to hear it while he was trying to relax in his own basement."

Why I Wrote Me And A Guy Named Elvis

Elvis still matters. His music lives on, and, almost 30 years after his death, his life and achievements continue to have deep emotional impact on all of us. The fact that my friend's artistic legacy remains so strong makes me proud, but I did not write my book simply to celebrate that legacy. Frankly, you don't need me to tell you that Elvis was a great performer, that Heartbreak Hotel can still give you chills, or that If I Can Dream can still make you cry. But, I think that over the years, as Elvis' music and image have become more and more iconic, the very important human side of his story has been lost. That's what I wanted to capture in my book, because the Elvis I knew was not a legend - he was a man. A man of great talents, but also a man who struggled mightily to find a balance in his life between his creative passions and the real-world challenges he constantly faced. Elvis worked incredibly hard to achieve what he did, and if my book accomplishes anything, I want it to remind people what a revolutionary force he was in kicking down barriers - between different kinds of music and between people of different races - and in opening up a whole new world of possibilities for us with the gift of rock and roll. Beyond the music, I want to let people know what a deep person Elvis was, what an intelligent seeker of knowledge he was, and, most personally, what a real friend he was.

I've come to feel that my friend gave me his blessing for this book long ago when he was on a drive across the desert with karate instructor Ed Parker. Elvis told Ed he was considering writing his autobiography, to be titled Through My Eyes. He told Ed that he did not want many people around him involved in this project, but he mentioned only one by name that he did want to be a part of it: me. He was ready to trust me with his story back then, and I kept that very much in mind as I wrote my book.

In the fall of 1964, when I first went to work for Elvis after a decade of friendship with him, I was a few practice teaching credits shy of becoming a history teacher. Now after half a century of living through all kinds of experiences with this man and his family and friends, I've come full circle - I'm now ready to share some history. It just so happens that my subject of expertise is Elvis Presley, one of the most important figures of the 20th century and certainly the most remarkable man I've ever known. If I can get you to feel - really feel - a bit of what our times together were like, and give you a fresh appreciation of Elvis' life and work, then I will have accomplished in Me And A Guy Named Elvis what I set out to do.

An intimate memoir of a friendship with the greatest artist in rock and roll history, taking you from late-night parties at Graceland to the bright lights of Hollywood sets and glittering stages of Vegas

On a lazy Sunday in 1954, twelve-year-old Jerry Schilling wandered into a Memphis touch football game, only to discover that his team was quarterbacked by a nineteen-year-old Elvis Presley, the local teenager whose first record, That's All Right, had just debuted on Memphis radio. The two became fast friends, even as Elvis turned into the world's biggest star. In 1964, Elvis invited Jerry to work for him as part of his 'Memphis Mafia', and Jerry soon found himself living with Elvis full-time in a Bel Air mansion and, later, in his own room at Graceland. Over the next thirteen years Jerry would work for Elvis in various capacities-from bodyguard to photo double to co-executive producer on a karate film. But more than anything else he was Elvis' close friend and confidant: Elvis trusted Jerry with protecting his life when he received death threats, he asked Jerry to drive him and Priscilla to the hospital the day Lisa Marie was born and to accompany him during the famous "lost weekend" when he traveled to meet President Nixon at the White House.

Me and a Guy Named Elvis looks at Presley from a friend's perspective, offering readers the man rather than the icon-including insights into the creative frustrations that lead to Elvis' abuse of prescription medicine and his tragic death. Jerry offers never-before-told stories about life inside Elvis' inner circle and an emotional recounting of the great times, hard times, and unique times he and Elvis shared. These vivid memories will be priceless to Elvis' millions of fans, and the compelling story will fascinate an even wider audience.

From the Back Cover

Advance Praise for Me and a Guy Named Elvis

"This book kept me up late into the night as I turned the pages, reliving every situation and every story as if I were there all over again, until I finished. Jerry Schilling's words brought tears to my eyes, making me smile and nod as it filled my head with things I had forgotten but thankfully he remembered. Jerry tells his story with the freshness and purity of a man who truly loved his friend. Me and a Guy Named Elvis is not only authentic, honest, and truly moving-it is a marvel."
-Priscilla Presley

"Jerry Schilling has captured the beauty of my father's spirit in a way that has never been done before. I will admit that I was nervous to read another book on this subject, especially by a friend (there are not many who remain in my life from this time period, as Jerry does), but this book is by far my favorite. It is a captivating, well-written, and un-crucifying account of many historic moments that shows the real birth and evolution of Rock and Roll and how it bridged the racial divide. Jerry tells his story of a young boy growing up poor with no real family before fate changed his life during one Sunday afternoon game of football-and he tells it with humility, honesty, and dignity."
-Lisa Marie Presley

"What Jerry Schilling has written in Me and a Guy Named Elvis is an account of one man's experience, a personal memoir that, while it places its narrator squarely in the midst of historic events, never claims credit for those events in the way that so many self-serving memoirs are inclined to do. It is a balanced treatment of a complex subject . . . What I think distinguishes the book most of all, though, is its emotional honesty, the generosity of spirit with which Jerry seeks to emulate his friend and mentor."
-Peter Guralnick, author of Last Train to Memphis and Careless Love

Jerry Schilling has spent forty years in the entertainment industry as an actor, a film editor, producer, and a manager for such acts as the Beach Boys, Jerry Lee Lewis and Billy Joel. His credits as a film and television producer include Elvis: Great Performances; the ten- hour series The History of Rock N' Roll; A&E biographies of Brian Wilson and Sam Phillips. He also appeared in the recent CBS special Elvis by the Presleys. He lives in Los Angeles in a home purchased for him by Presley.

Buy Me And A Guy Named Elvis