Many rock artists influenced Bruce Springsteen in a big way, including Bob Dylan, The Beatles, Van Morrison and Roy Orbison. But the primal, No. 1 influence - the place where it all started for him - was Elvis Presley.

I had never really thought about this, and might not have previously agreed with that statement, before watching 'If I Can Dream: The Influence of Elvis on Bruce', a new documentary compiled from previously existing footage by Dennis P. Laverty. Laverty, a former Old Bridge resident who now lives in Staten Island (and who calls Springsteen and Elvis Presley 'my two favorite rock stars'), uses concert footage and previously released interview segments with Springsteen and various rock experts to show just how important Elvis Presley was to Springsteen.

If I Can Dream: The Influence of Elvis on Bruce 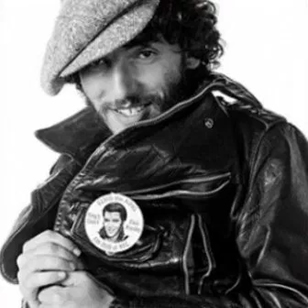 Bruce Springsteen proudly displays an Elvis Presley fan club badge in a photo taken by Eric Meola
This outtake from the photo session for the 'Born to Run' album cover
is seen in Dennis P. Laverty's new documentary, 'If I Can Dream: The Influence of Elvis on Bruce'.

It started, of course, with Elvis Presley's first appearance on 'The Ed Sullivan Show', in 1956 (which Springsteen saw, at 6).

'Everything starts and ends with Elvis', Springsteen said, more succinctly, in 1978.

Springsteen has written a song for Elvis ('Fire') and a song about him ('Johnny Bye-Bye').

Laverty's 75-minute film covers also all of this, with lots of rarely seen, electrifying concert performances. It also explores the famous 1975 jumping-the-wall incident at Graceland (in which an over-eager Springsteen tried, unsuccessfully, to meet the King), the Elvis Presley concerts that Springsteen saw in person, and interesting tangents such as Patti Scialfa's song 'Looking for Elvis' and the reverence that Springsteen associates Jon Landau and Dave Marsh have for Elvis Presley.

The film also includes footage of Elvis Presley performing in concert and being interviewed, and ends with a look at some parallels in the lives of him and Springsteen.

Hardcore Southside Johnny fans were very appreciative of 'History of Southside Johnny and the Asbury Jukes', and I think Springsteen fanatics are going to feel the same way about 'If I Can Dream'.