The definitive truth about Elvis Presley and racism according to B.B. King

'Let me tell you the definitive truth about Elvis Presley and racism', The King of the Blues, B.B. King said in 2010. 'With Elvis, there was not a single drop of racism in that man. And when I say that, believe me I should know'.

A few years before Presley walked into Sam Phillip's Recording Service at Sun Studios in Memphis, Riley B. King was beginning his recording career there in 1951. King does remember when he first met the young Presley, it was obvious how respectful and comfortable he was around bluesmen. King, in his 1996 autobiography, said Presley 'was different. He was friendly. I remember Elvis distinctly because he was handsome, quiet and polite to a fault. Spoke with this thick molasses southern accent, and always called me 'sir'. I liked that'.

There has been much debate and speculation in the music world this weekend about Presley's impact on music as it relate race. Perhaps it's because of the controversial lyrics from a new Macklemore song called 'White Privilege II which suggests Miley Cyrus, Iggy Azalea and Elvis Presley are 'so plastic, you've heisted the magic' from the black culture. Others suggest its because of some other of the growing division in America between races the last seven years. Many think it could be making news because of Will Smith's decision to boycott the Academy Awards.

In an Oct. 10, 2010 interview with this writer in his tour bus behind the Majestic Theater in San Antonio, Texas, King was particularly open in his comments. Perhaps it was because present ofHilton Conrad Joseph, a saxophone player for King in the 1970's and 80's that the writer helped arrange the two to see each other after more than 20 years). King enthusiastically shared his thoughts about happiness, his famous guitar ('Lucille'), musical influences and Elvis, 'the other King'.

'All of our (Presley's and King's) influences had something in common', King explained. 'We were born poor in Mississippi, went through poor childhoods and we learned and earned our way through music. You see, I talked with Elvis about music early on, and I know one of the big things in heart was this: Music is owned by the whole universe. It isn't exclusive to the black man or the white man or any other color. It shared in and by our souls'.

'I told Elvis once, and he told me he remembered I told him this, is that music is like water', King pointed out. 'Water is for every living person and every living thing'.

King raised his finger up as if Elvis was still in front of him, and profoundly declared, 'Water from the white fountain don't taste any better than from the black fountain. We just need to share it, that's all. You see, Elvis knew this and I know this'.

'Many people make the mistake of being wrong about all of this', King continued. 'If you ask anyone, I'm talking about people from all kinds of music - Blues, Soul, Country, Gospel, whatever - and if they are honest with you and have been around long enough to know---they'll thank Elvis for his contributions. He opened many doors and by all his actions, not just his words, he showed his love for all people'.

'People don't realize that when 'That's All Right, Mama' was first played (by Dewey Phillips in July 1954) no one had ever heard anything like that record', King stressed. 'It wasn't just country. It was Rhythm and Blues. It was Pop music. It was music for everybody. This is important'.

King spelled out that there were two very specific music influences that he had in common with Presley.

'I was barely 11 years old, when one of the greatest influences of my life, Robert Johnson, was recording just across the street from this (Majestic) theater recording his first ever songs', he revealed.

King was talking about how, on the corner of Houston and St. Mary's streets in San Antonio, at the Gunter Hotel, Johnson changed the music world forever. King grew up listening to the 16 songs Johnson recorded in the Gunter and 'that had a lot to do with where I am today'.

'Johnson came from the same dirt Elvis and so many of us did', King submitted. 'It was the world of sharecropping, and to survive that hard work bending over all day long, there would be plenty of singing. Elvis' momma and daddy did their share of it - both the picking and the singing. It was called survival. It was called life. It was just as important to us as water. It was as important to those of us who had it in our souls as the water'.

'The other big influence was Jimmy Rogers', King said. 'Some people want to say he was the Father of Country Music, but like Elvis, he was more than that. He was a big influence on not just me. I used to listen to my aunt's records of Jimmy Rogers and that was a real treat. I liked that 'Mississippi Delta Blues' and to listen to him yodel'.

'I never did yodel', King laughed. 'But Jimmy Rogers could sure yodel. He was very good at it. But yes, he influenced more than country music, he influenced Howlin' Wolf and Muddy Waters as much as he did Merle Haggard or Willie Nelson. See, Elvis did that too, but only much wider. Elvis influenced everybody's music and it was for the good of all of us'.

'Now, where did Jimmy Rogers learn his music from', King asked, before he gave the answer. 'He learned it working alongside the black railroad workers and hobos. Elvis lived and played with black children back in (Tupelo) Mississippi. He told me that when he was just a baby and his mama had to work, he was cared for sometimes by his grandmamma, but mostly by a neighbor black lady'.

Rogers turned out to be the first superstar in the country music field. Born in 1897, his mother died when he was barely seven years old. He spent his childhood residing with several relatives in southwest Alabama and southeast Mississippi. His father found him a job working for the railroad as a water boy for the railroad and Rodgers soon fit in among the rail workers and hobos. He enjoyed listening to gandy dancers, African American workers, who would sing hymns and work songs daily. He learned to pick a guitar from some of them.

'People today will say things about Elvis they just don't know about', King commented. 'They want to say this is black music, this is white music, this is country music. But when Elvis came along all that was suddenly washed down the drain'. 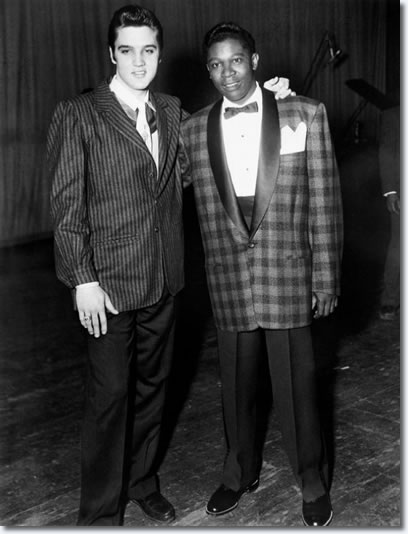 'Before Elvis we had Little Black Sambo, separate black restrooms and water fountains, and colored events that kept us away from the whites', King noted as he mention that Presley would attend events especially designated just for African-Americans. In June 1956, Presley ignored Memphis's segregation ordinances by attending 'colored night' at the local fairgrounds amusement park. The following December, King was there as Presley opened up almost unbreakable racial barriers by attending and supporting the segregated WDIA black radio station's annual fund-raising event for 'needy Negro children' at Memphis' Ellis Auditorium.

King wrote in his autobiography that he 'liked Elvis. I saw him as a fellow Mississippian. I was impressed by his sincerity. When he came to the Goodwill Review (the event WDIA fund raisers of 1956 and 1957), he did himself proud'.

'The Goodwill Revues were important', he wrote. 'The entire black community turned out. All the DJs carried on, putting on skits and presenting good music'.

'When Elvis appeared (in 1956) he was already a big, big star', King continued. 'Remember this was the fities so for a young white boy to show up in an all-black function took guts'.

'I believe he was showing his roots and he seemed proud of those roots. After the show he made a pint of posing for pictures with metreating me like royalty', King recalled. 'He'd tell people I was one of his influences. I doubt whether that's true but I like hearing Elvis give Memphis credit for his musical upbringing'.

'Back in '72, Elvis helped me get a good gig at the Hilton Hotel while he was playing in the big theater', King acknowledged in 2010. 'He put in a call for me and I worked in the lounge to standing room only. Elvis fans came in different colors but their love of good music was all the same. They were always a good audience'.

'Many nights I'd go upstairs after we finished our sets and go up to his suite', King confessed. 'I'd play Lucille (his guitar) and sing with Elvis, or we'd take turns. It was his way of relaxing'.

'I'll tell you a secret', King winked and laughed. 'We were the original Blues Brothers because that man knew more blues songs that most in the business - and after some nights it felt like we sang everyone one of them. But my point is, that when we were hanging out in the Hilton in the 70s, Elvis had not lost his respect, his 'yes sir,' his love for all fields of music. And I liked that'.

At the same time 'Heartbreak Hotel' was climbing the charts in March 1956, Billboardmagazine featured an article called, 'Barriers Being Swept Away in C&W, Pop and R&B Fields. 'Hard and fast cleavages between the country and western, pop, and rhythm and blues fields are rapidly breaking down', writer Paul Ackerman penned. 'Perhaps the most interesting example of the breakdown of categories, however, is the current overlapping of the country, rhythm and blues fields … The outstanding example of this type of performer today is Elvis Presley, recently with Sun Records and now on the Victor label'.

When Sam Phillips, as Sun Records, released a Presley record, he made sure each bop/rock/pop song had a country tune on the flip side to appeal to both type of listeners. RCA took this innovation even further by marketing Presley in Country, Rhythm and Blues, and Pop fields. By May of 1956, Presley's 'Heartbreak Hotel' became the first 'Double-Triple Crown' in Billboard history.

In his autobiography, King said he held no grudges because 'Elvis didn't steal any music from anyone. He just had his own interpretation of the music he'd grown up on, same is true for everyone. I think Elvis had integrity'.

'If anyone says Elvis Presley was a racist', charged B.B. King in the 2010 interview. 'Then they don't know a thing about Elvis Presley or music history.