An Interview with Mother Dolores Hart

Once an in-demand Hollywood actress, Dolores Hart shocked the entertainment industry when she gave up everything to become a cloistered Benedictine Roman Catholic nun. She left her career, broke off her engagement to Los Angeles businessman Don Robinson, and pursued her vocation as a nun.

Dolores Hart was born Dolores Hicks on October 20, 1938, in Chicago, Illinois. Dolores is the only child of Bert and Harriett Hicks. She is also the niece (related by marriage, through an aunt) of singer Mario Lanza.

Using the stage name of 'Dolores Hart', in 1956 she was signed to play a supporting role as the love interest to Elvis Presley in the 1957 release Loving You. After this appearance, Dolores found herself in frequent demand, and she made two more films before playing with Elvis Presley again in 1958's King Creole. She then debuted on Broadway, winning a 1959 Theatre World Award as well as a Tony Award nomination for Best Featured Actress for her role in The Pleasure of His Company.

In 1960, Dolores starred in Where the Boys Are, a teenage comedy about college students on spring break which developed a near cult-like following. She went on to star in four more films, her last opposite Hugh O'Brian in 1963's Come Fly with Me. At this point, she had made up her mind to leave the film industry, and after breaking off her engagement to Los Angeles businessman Don Robinson, the twenty-five-year-old actress became a Roman Catholic nun at the Benedictine Abbey of Regina Laudis in Bethlehem, Connecticut, ultimately becoming the Prioress of the Convent. 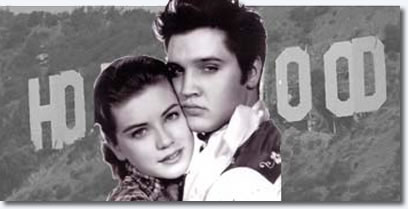 Dolores Hart went on to star in four more films, including the lead role in Lisa which was based a novel by Jan de Hartog and nominated for a Golden Globe for 'Best Picture - Drama'. She was considered one of Hollywood's rising stars and was cast for roles in Wild is the Wind, The Plunderers, Francis of Assisi, Sail a Crooked Ship and Lonelyhearts, with Montgomery Clift. Her last role was opposite Hugh O'Brian in 1963's Come Fly with Me.

When did you receive the call from Paramount Studios?

Mother Dolores: In the middle of charm class, at Marymount, I received a call from Paramount studios! It was the associate producer of Hal Wallis and he wanted me to come to Paramount for a meeting. The teacher didn't want me to take the call she thought it was a sham. I took the call.

They wanted to meet me that afternoon, maybe in a half hour, at Paramount. Indeed, I wanted to meet them, too. My friend, Don Barbeau, came to pick me up in a 1938 hearse. I had on my letter sweater and socks and went to see Mr. Hal Wallis. He asked me, 'What do you want to do with your life?' I responded quickly and said, 'I want to be an actress'.

'We're doing a picture with Mr. Presley and we want you to start next week'. I didn't even know who Elvis Presley was but the next week were the final tests at school. I said, 'Does it have to be next week?'

Mother Gabriel, the Dean of girls, came to see me and told me, 'Kids in the drama school want an opportunity like what you're going for.

Dolores this is the big one. Go for it!'

I said, 'Okay, okay!' I took her advice, did the screen test and got the part.

The cameraman asked, 'Miss Hart, who taught you technique on film? Where did you go to school?'

'I never went to school for such'. To which he replied; 'You certainly know what to do'.

Finally, the call came and I would start filming with Mr. Presley. I met with Wallie Westmore for makeup and Edith Head to design my wardrobe for the movie Loving You. 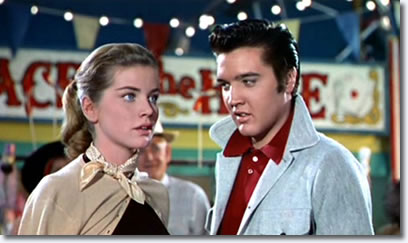 Mother Dolores: Well, two years later, I did another picture with Elvis Presley. Jan Shepherd played Elvis' sister in the film. It was her birthday and we had a party for her at my house.Above, view a home movie with Dolores Hart, Elvis Presley, and friends: Jan Shepherd's birthday party.

Elvis came to the birthday party. I played the clarinet and Elvis sat down and played the piano. We played a few tunes for Jan's birthday. He was quite a gentleman a quality of simplicity, humor, and shyness about him. It was very much his persona at that time. 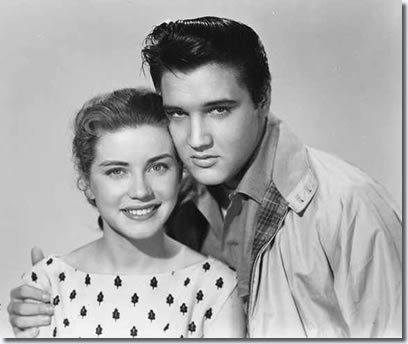 When we were making King Creole, he had so many people after him you couldn't walk through the streets in New Orleans. It was like a circus. You would not believe the crowds. Policemen were everywhere. We had to go to hotel rooms to wait in between scenes. When we finally got to the site, we were ushered into the elevator, [and] in the hotel rooms. There would be boards built from one hotel to another. We crossed over to another hotel and would go down the elevator and enter another room. They'd bring us sandwiches. Elvis would open the Gideon Bible, as that was the version placed in the hotel rooms. Whatever passage he'd open it to, we would talk about it. He would ask me, 'What do you think of this passage?' 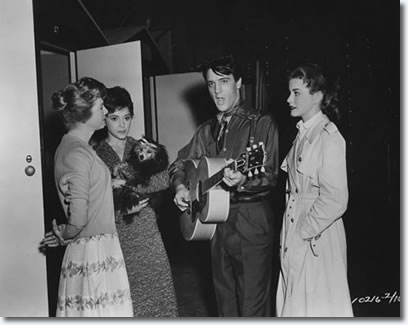 How did you happen to come to visit the Abbey?

Mother Dolores: In 1959, I was in a play in New York, The Pleasure of His Company. A friend invited me to meet some nuns and she said, 'They are very special. I exclaimed, 'NUNS! No, I don't want to meet nuns'.

But my friend said, 'Did I ever steer you wrong?' and I said, 'No'. So, I came to Regina Laudis after a few hours here, it has a definite call. You feel you're in a special place. Well, after the first visit, I kept coming back in between shows. Eventually, I asked the Reverend Mother if she thought I had a vocation.

She said, 'No, no; go back and do your movie thing. You're too young'.

I did, and then did some more films: Where the Boys Are and St. Francis of Assisi which took me to Rome. I met Pope John XXIII and he was very instrumental in helping me form my ideas about a vocation. When I was introduced to the Pope, I said, 'I am Dolores Hart, the actress playing Clara'. He said, 'NO, you are Clara! ('Tu sei Chiara' in Italian). Thinking he had misunderstood me, I said, 'No, I am Dolores Hart, an actress portraying Clara'. Pope John XXIII looked me square in the eye and stated, 'NO. You are Clara!'

His statement stayed with me and rang in my ears many times.

Reverend Mother, would you please tell us about your engagement before entering the Abbey?

Mother Dolores: A very wonderful experience for Don Robison and [me]. He had a feeling that I might have a 'calling'. He wanted to try the engagement: 'Let's give this a try'. Several days went by and we were driving down the road when he stopped the car. Don said, 'Something isn't right. Do you love me?'

'Of course, Don, I love you'. He asked again and then said, 'Something in you is not with me'.

When I returned home at 1 a.m., I called and got a flight for 6 a.m. to Regina Laudis. God is far from all of us until we get into the reality of ourselves. I finally came to say in my heart more than anything and then openly to myself: 'My search for God was a marital search'.

When I spoke to Don again he knew, because a man knows every human being knows when something is real. We were at supper and I didn't have my ring on. Don said, 'I know…I've known it. This is what you've got to do and I've got to do this with you. We've got to do this together'.

That was an amazing gift and all these years he's been like that.

Don says, 'Every love doesn't have to wind up at the altar'.

Many relationships can wind up a lot worse. He never married. Don comes every year at Christmas and Easter. He wants to do whatever he can for the community.

If you had to do it again, would you do it?

Mother Dolores: I would hope I would have the courage to do it again

My vocation has been most fulfilling and gratifying'.

You walked away from Hollywood. Why?

Mother Dolores: I never considered my decision as 'walking away from Hollywood', Barbara. I felt it was more walking into something more significant and by that, I took Hollywood with me. I really loved my work and the people I worked with. [Mother Dolores is still a voting member of the Academy.]