In the spring of 1960, a Dutch housewife named Nel Dankers-van Kuijk visited her hairdresser in Eindhoven, and thumbed through the new issue of Rosita, a Belgian women's magazine.

There she saw a photograph that stopped her heart. A young American singing star, Elvis Presley, just home from the army in his handsome dress blues, waved to his fans from the doorway of a train.

But it was the big man standing behind him who caught her eye. He looked so much like her younger brother Jan. Then she saw his name - Tom Parker. Wasn't that the same name scrawled at the bottom of those strange letters from the States some thirty years before? 'My God', the stunned Nel said aloud. 'That is our Dries'. 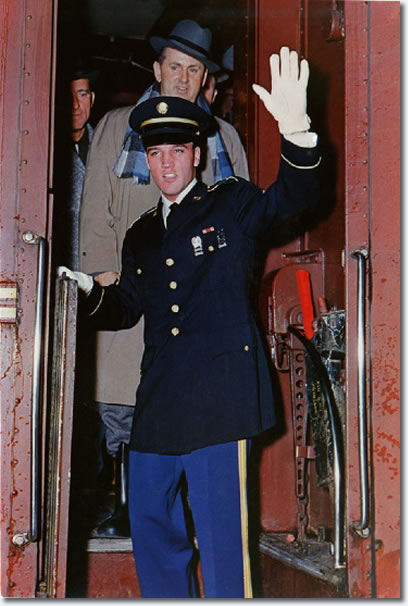 Elvis arrives home in Memphis, March 1960.
This is the photo that alerted Colonel Parker's Dutch relatives to his existance as Colonel Tom Parker, the manager of Elvis Presley.

Afterward, Nel had telephoned her brother Ad. First Ad gazed at the face in disbelief, and then he compared it to old family photographs. Now Ad was certain that the famous Colonel Parker was their own long-lost brother, Andreas van Kuijk. 'It seemed like a fairy tale', he said, but the rest of the family also saw the resemblance. Through the years, they had received the odd postcard, or an envelope containing a miniature American flag, a not so subtle statement of their brother's loyalties. Now several of them began writing, mostly in their native language, which Parker could barely read anymore. They got only Elvis memorabilia in return.

Finally, nineteen-year-old Ad Jr. decided to send a plaintive letter, an appeal to the Colonel's heart. He could understand that Parker wasn't interested in relatives he hadn't seen in so many years, he wrote in English, but the family needed to know if at last they had found the brother they had mourned so long.

On January 31, 1961, Parker sat down and answered 'Master Ad Van Kuijk Jr.', as he addressed the envelope, writing at once the most enigmatic and revealing document of his life. He typed it himself on plain paper, retaining all the odd syntax and spelling ('some-one') that characterized his letters to Hal Wallis.

The letter began in the third person, as if the author were a secretary.

Throughout, in guarded self-protection, he showed himself to be deeply disturbed about an episode that he never quite defined. He repeatedly asked in a paranoid tone that all his relatives stop writing until they heard from 'Mr. Parker', as the letters were getting mixed in with the fan club mail, and 'I am sure you will agree that this matter if it involves Mr. Parker, must be handled very carefully and privately'.

As for why the family had not heard from him, he assured Ad Jr. that Mr Parker has felt the same longing and hopes as all of you but must have had a very good reason and many problems so not to bring them to any of his people at any-time'. Then he cryptically referred to 'Friends' who might assist them in the future. 'We will try to help in some way to at least make-up for any mistakes some-one may have made without meaning to do so'. With that, he bizarrely switched to first person ('Remember me to all of them') as the text hinted of past deeds and secrets. He signed the letter with a signature that only his Dutch family would know - 'Andre'.

Ad Jr. was proud to have received such a reply but was baffled by its contents. What was Uncle Andre really trying to say, referring to 'mistakes some-one may have made without meaning to do so?'

The letter, sent by air and marked 'Special Delivery' - useless in Holland, but still communicating a red code of urgency - arrived in Breda on February 4, 1961. Sixteen days later, in a surprise turnabout, Ad Sr. was invited to visit his brother in America. The trip, which Parker paid for, was arranged through a Dutch husband and wife with a similar surname - van Kuijck - living in Havensack, New Jersey.

Ad Sr. flew to New York on April 9. There he was met by the van Kuijcks, who entertained him for eleven days until the Colonel returned to Los Angeles from location filming of Blue Hawaii. Then the three traveled to California. Parker suspicious that his visitor 'was a crook from Europe to blackmail him', as Ad Jr. says, asked the man outright if he had come for money. Ad Sr. assured him he had not. Parker stared at his sibling, only four years younger, and then said finally, 'Yes, you are my brother'. They spent a week together, with Parker putting him up at his apartment in Los Angeles, conning a William Morris trainee into showing him the sights, even introducing him to a few colleagues as a 'business associate'. 'Still, the Colonel kept his distance. He showed no emotion when Ad Sr. told him news of his brothers and sisters. 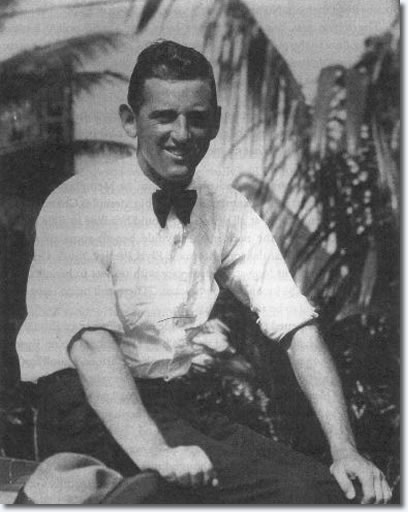 Ad Sr. had promised the family that he would bring back pictures of himself with their brother, but although Marie obliged, Colonel Parker refused to be photographed with him, as if such evidence might somehow be against him. Yet it was important that the family understand just how successful he had become. Before Ad went home, Parker did the unthinkable - he took him to Elvis' rented home on Perugia Way and introduced him as his brother. Elvis, watching television with the guys, rose to shake his hand. The Colonel doubtless had a story for why his brother spoke in a thick foreign accent, though according to Ad Jr., Elvis was neither impressed nor especially curious. Lamar Fike believes Elvis never understood the connection. 'If Elvis had known, he would have said it. He couldn't keep a secret'.

When Ad Sr. returned to Holland, the family was eager for news. What was he like? How had he explained his awful absence? Ad Sr. had few answers for them. They hadn't talked much about private matters, he said, other than how Andre had painted sparrows yellow and sold them for canaries, and gypped rube carnival goers with a quarter glued to the side of his ring. Ad Sr. had the distinct impression he shouldn't ask too many questions. But he did meet Elvis Presley, the singer their brother had made the most famous man on earth.

Ad Sr. died in 1992 of emphysema, never fully elaborating on the events to his siblings.

Text from The Colonel : The Extraordinary Story of Colonel Tom Parker and Elvis Presley by Alanna Nash.

Photos : Colonel Parkers Birthday on the Set of the '68 Special

I Met The Colonel