Beatles' Autographs on Elvis' Personal Stationery | August 27, 1965. Iconic is an understatement! It was August 27, 1965. The Beatles were on the eve of playing the Balboa Stadium in San Diego. Elvis was in the midst of shooting Paradise, Hawaiian Style in Hollywood. That night, between 10 and 11 p.m., John Lennon, Paul McCartney, George Harrison and Ringo Starr arrived in limousines at Elvis' domain, 565 Perugia Way in Bel Air, and Elvis personally greeted them at the door for what forever after became known as the 'summit meeting' of Pop music and Rock and Roll. 'If you guys are going to stare at me all night', joked Elvis, 'I'm going to bed!'

In fact, Elvis was awed too, but the ice broke and the evening found Elvis and John, Paul and George playing guitars (while Ringo, without drums, banged the side of a chair), the group admiring Elvis' new sauna, laughing at a fan who had infiltrated the house and began screaming hysterically, and discussing the terrors of fame. In one moving (and retrospectively chilling) moment, John noted that Elvis was very brave to perform in public before the wildly screaming and actually dangerous fans -- after all, onstage, the Beatles had each other.

A relic survives from that legendary meeting -- Jerry Schilling, a member of Elvis' 'Memphis Mafia', got the autographs of all four Beatles on a 5" x 8" piece of Elvis Presley's personal stationery, and dated the event '8/27/65'. The autographs are sharp and clean in blue ink, the word 'Elvis' is pre-printed in the upper left corner, and the dynamic of the signatures of the 'Fab Four' on the stationery of 'The King' is -- for lack of a better word -- magical. 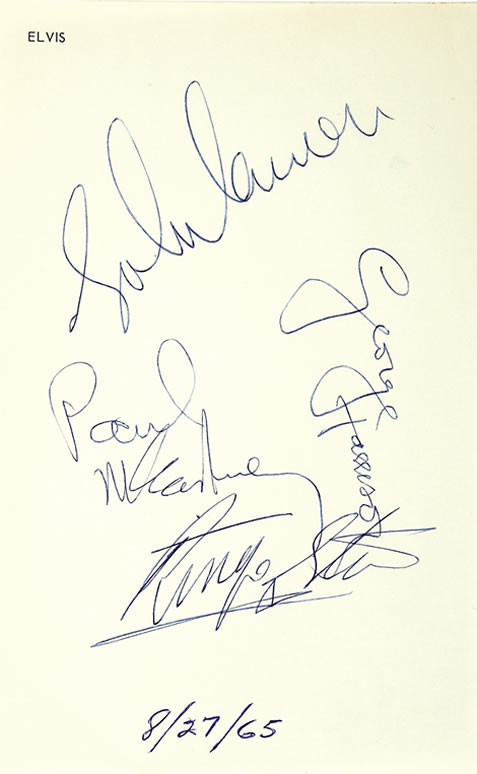 The Night John Lennon (and The Beatles) Met Elvis Presley