Review | Let Me Be The One | Behind Closed Doors CD

When not working, Elvis Presley loved the company of friends in the sanctuary of his home, and enjoyed nothing more than addressing selections at the piano, strumming a guitar, or simply singing songs old and new, borrowed or blue. Fortunately, some of these 'private sessions' were captured on tape.

Now, after years of piecemeal releases from the official label, three complete recordings have been issued on Let Me Be The One by Audionics. Having fulfilled a successful tour in March 1974, Elvis spent some of his ensuing time off on 1350 Ladera Circle, in sunny Palm Springs. On one such occasion, girlfriend Linda Thompson had a cassette tape recording while Elvis amused himself with his on-call vocal group Voice. 'We were around the piano in Palm Springs ... just having a good time', said tenor Sherrill Nielsen.

Besides capturing sweet duets with Sherrill and Linda, the tape also finds Donnie Sumner banging out the simple chords to a Roger Nichols and Paul Williams tune, 'Let Me Be The One'.

First heard by the Carpenters, and in a version on RCA by singer Jack Jones, Elvis hangs back on their rendition, letting Voice croon while he chimes in with a salty chorus or two. Then the spirit of the occasion moves Elvis to seize all of the song for himself, leading a full-blooded finale. It's a song that undoubtedly would have been taped at his late 1974 RCA sessions, had they not been unexpectedly cancelled.

At least this previously-unreleased rarity is here, now, for all fans to savor, and ponder.

Coming out of the hospital in early November 1973, Elvis was holding close to girlfriend Linda Thompson, trying to find himself again. That first weekend, while out and about in Memphis, they stopped at her brother Sam's home on 1317 Favell Drive. There, with Sam, his wife, Linda and Sam's parents, and Dusty, the family dog, Elvis picked up Sam's old Gibson and began to make some noise. Elvis' mood mirrors this quiet period in his life.

Elvis' voice is miles way from the sometimes-overpowering style heard on tour.

There are light versions of 'That's All Right' and 'See See Rider', and he returns to 'Baby, What You Want Me To Do', the Jimmy Reed blues that dominated his 1968 TV Special; inside Sam's abode he plays it loose, the riffs cascading down like melted butter. Elvis sings a different verse of the Hank Williams classic 'I'm So Lonesome I Could Cry' than what was done on his April 'Aloha From Hawaii' TV Special, and one imagines this is exactly how he and James Burton rehearsed it the previous January in Honolulu. A more revealing number in his life at this time cannot be imagined. There's an informal version of 'Spanish Eyes', which he reprises in a beautiful falsetto, perhaps recalling Slim Whitman. 'He goes into that falsetto', Elvis recounts. 'Ladies and gentleman, this is being recorded tonight live, for a new album', jokes brother-in-law Ricky Stanley.

There is a good feeling in the room, more intimate than nearly anything Elvis would lay on professional tape in the 1970s. Elvis asks everyone to listen to a poem. He recites the prose in a dead-serious voice, until he delivers the last line. The room explodes in laughter; it was all a set-up for a little joke, Elvis-style.

Looking further back, to the fall of 1960, at his Beverly Hills home on 144 Monovale Drive, we find Presley at the piano with friends Red West and Nancy Sharp. First up is a snatch of 'You'll Never Walk Alone', followed by 'If I Loved You', each from Richard Rodgers and Oscar Hammerstein II's 'Carousel' and each achingly beautiful.

Elvis nails the finale of 'If I Loved You', again and again.

Only the greatest vocalists approach a melody in such fashion without fear of failure. Had Elvis taped an official recording of this, it would undoubtedly be known today as one of his finest-ever studio masters.

Elvis and Nancy try out a bouncy little pop number, 'I Wonder, I Wonder, I Wonder', a hit for Martha Tilton on Capitol back in 1947. With the time machine on full, they duet on the 1937 Bing Crosby hit, 'Sweet Leilani'. They caress this gentle, haunting ballad with sugar cane sweetness. Perhaps 'Waikiki Wedding', which features Bing doing the charming ballad, had just been on TV, or screened at a local theater.

These are not easy songs for anyone to sing, let alone a couple of friends fooling around a piano;

'She Wears My Ring' is a brand-new single on Hickory by R&B singer Jimmy Bell, a small label release that will never dent the charts. The full-throated Bell ballad is turned into a tender duet by Sharp and Presley -- ironically, Elvis drew quite a bit from Bell's original recording of 'She Wears My Ring' at his Stax sessions over a dozen years later! Revisiting 'Sweet Leilani', they are a delight, right down to Elvis' lovely glissando across the keys at the end, and Nancy saying 'Good night' to someone.

After the Ink Spots standard 'When The Swallows Come Back To Capistrano', and blind R&B singer Al Hibbler's religious platter for Decca, 'He', Elvis turns up the heat with 'Hands Off', a 1959 Jay McShann single.

As tape runs out, Elvis is leading the assembled through a rollicking 'Lawdy, Miss Clawdy', one of his all-time favorite R&B songs. What a ride. Although these tapes are relatively modest examples of Elvis Presley, behind closed doors, their insights into the 20th century's greatest singer should be treasured today, tomorrow and forever. This is yet another essential release for the serious fan from the mysterious Audionics label. 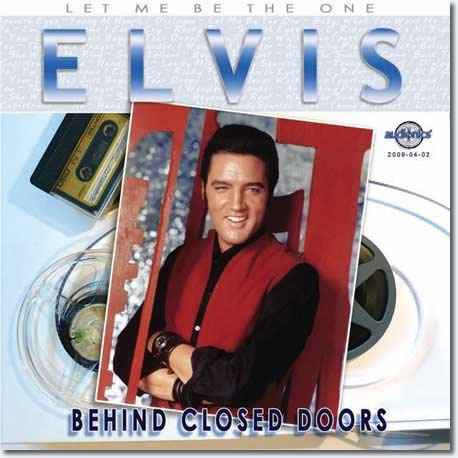