When I first heard the name Elvis Presley I was on a small island, Coochiemudlo, in Queensland, Australia. It was either August 1977 or January 1978. My grandmother mentioned the news that Elvis had died. To be more precise she said something close to 'don't you feel sorry for your dad because Elvis died?' It meant little to me as I had never heard the name before. But it was impossible to not hear a lot around that time and for a number of years after. At least one radio station in Melbourne played only Elvis for 24 hours straight in the year or two following his death.

For the record I was on Coochiemudlo sometime during 1977, I had gone up with a friend. And this was not usually the case mid-year. But there is now no way to know when exactly I was there. As always I was there in January

Each year I would be back on the island for school holidays and looking for the newspapers that had a commemorative poster. Up until this time I had been listening to The Eagles and Little River Band but It was not long before I got my first Elvis record, 'Roustabout'. I can still clearly recall playing that over and over again for months. It was a little un-cool to like Elvis but that didn't bother me.

I don't recall any more until 1982. I caught up with a childhood friend a few years ago and was telling him I really didn't become a 'big' Elvis fan until around 1982 - he laughed. He had spent a couple of weeks on holiday with me in 1978 and said, not only was I a mad Elvis fan after he returned home to Sydney he spent the next 6 months buying and listening to Elvis records due to my influence.

'This Is Elvis' was released at the cinema in Australia in 1982. I turned 18 on August 12 of that year, got my drivers licence the same day and drove into the city the next night to see the film. I don't recall a lot, but I did love it. I still have the ticket stub (right) - I remember more driving home in the dark, not easy on your first day behind the wheel.

With the 'This Is Elvis' film came the double-LP soundtrack. I didn't like it at first, with all the talking, but it quickly became a favorite of mine.

In 1986 I purchased my first CD player. My first CD was 'Tunnel of Love' by Bruce Springsteen. Why? Because there were no Elvis CDs available in store. However, I was able to order 'Elvis' Gold Records Volume 5'.

For the 10th anniversary in 1987, 'Words And Music' was released. (It reached #8 on the album chart) I can recall walking through a shopping center in St Ives NSW and being stunned by the display of Elvis at the front of the Brashs music shop. I purchased a cassette tape (being on holiday this was the easiest). There was something wrong with the tape; it was in backward so I had to exchange it for another. So much had changed, NOW. I loved the format, using Elvis talking between the songs. Later I purchased the CD. There was also a 6ft Elvis cardboard cutout. I managed to negotiate a sale with a record shop and it filled the backseat on my drive back to Melbourne.

In 1991 'Presley - All-Time Greatest Hits' was released and I followed the chart progress weekly. Keeping each chart, from the first listing of 'bubbling under' through to it reaching #7 which I thought was just incredible. Better was to come on the chart front with 'From The Heart' reaching #5 in 1992 and then 'The Romantic' reached #4 in 1994. The two highest chart albums between 1995 and 2004 were 'The Essential Collection' #20 and 'Elvis: 50 Greatest Love Songs' #23.

In 1996 I made my first Elvis website, just a single page, with a few pictures of Elvis. Either late that year or into 1997 I decided I wanted the Australian Elvis domain name. The website began as 'For Elvis Fans Only' while the domain www.elvis.com.au was literally born from the concept of wanting to represent 'Elvis in Australia', so ... www.elvis.com.au ...

At the time in Australia, you needed to have a registered business name in order to be able to claim the domain name. My first attempt failed. It was not legal to register a business name with 'Elvis Presley' included due to copyright. So I tried with just Elvis. My application was rejected again on the same basis. I did not give up. I tried again and argued the Elvis did not necessarily have to be connected with Elvis Presley and the associated copyright. I was successful and then went on to register the www.elvis.com.au domain.

1996 saw the first good quality Elvis bootleg soundboard concerts released. The Diamond Anniversary series was a revelation. We had soundboards for the first time, not audience recordings, and these were of a quality you could really appreciate, a joy to listen too. Sure we had one soundboard from RCA with the Silver Anniversary box in 1980 but now we had them coming out by the handful. It forced BMG's hand and in 1999 they finally gave us the real gem, the Follow That Dream Collectors label.

BMG announced the creation of FTD, 'To allow RCA's main retail focus to be maintained and ensure that the general public does not confuse Elvis' actual masters for general release with his substantial outtake material and other specialty material'. Perhaps it worked because it was to be only another 3 years until Elvis was top of the singles charts worldwide. In 2002, a remix of A Little Less Conversation was featured in a Nike TV ad. Public demand preceded a single release. Titled 'Elvis Vs JXL' the single reached #1 on the singles charts worldwide and ELV1S 30 #1 Hits reached #1 on the album chart, again worldwide, and sold more copies than any previous Elvis album. Suddenly Elvis was cool again.

In 2010 David Troedson and Wayne Hawthorne coproduced Elvis Presley: 50 Australian Top Ten Hits 1956-1977 which debuted at No. 9 on the Australian ARIA album chart.

What a lovely lady! I have met many of Elvis' friends and musicians, Elvis had a very good judge of character.

Priscilla was just so nice and friendly but what really struck me was I asked her to autograph a picture and offered a gold texta. Realizing that would not look very good she went out of her way, to stop and to ask her assistant for a black texta. She actually stopped and went looking for one! There are not many people that would do this. Have this much care and consideration.

OK, so I know what some will be thinking. 'Of course, she did that you are the president of the fan club'. No. Priscilla did not know 'who I was' because honestly I am no different to any Elvis fan and there is no reason why I would be known to her. I certainly did not say. 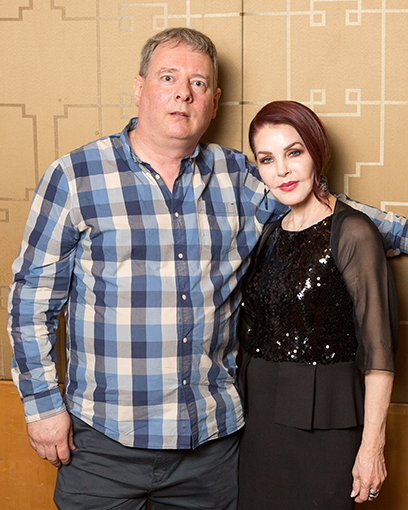 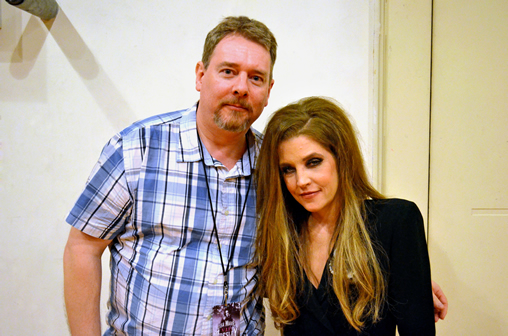 I was most fortunate to be given some time with Jerry Schilling backstage for a chat and a photo. 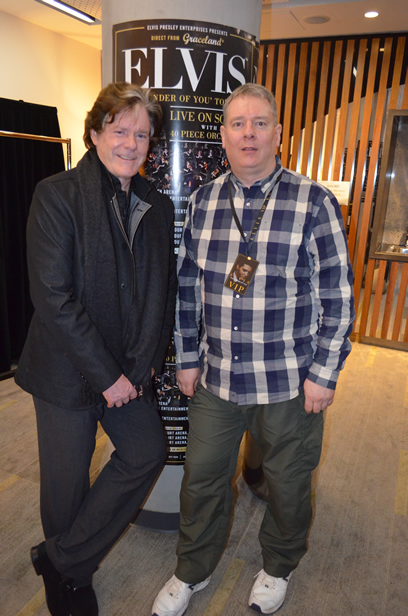