On January 4, 1976, on the spur of the moment Elvis decided to fly to Vail, Colorado for a vacation with Linda Thompson and a party of seventeen. Among those in the group are, Joe Esposito and his girlfriend, Shirley Dieu, Jerry Schilling and Myrna Smith. After checking into a Denver Hotel, Elvis dispatches Joe Esposito and two Denver Police officers, Jerry Kennedy and Ron Pietrafeso to Vail to find enough rental accommodation for the group. Elvis spends the evening of his 41st birthday in a rental home on the slopes of Vail with Jerry Schilling and Myrna Smith, who have been living together for more than a year and will eventually marry.

Many of the guys and their wives and girlfriends have been taking skiing lessons, but Elvis wears a full face Ski mask during the day but mostly only appears on the slopes at night in a rented ski mobile, causing eighteen-year-old Susan Ford, daughter of the President to protest his violation of local regulations.

On January 14, as a thank you gesture to his friends on the force, Elvis purchased two Lincolns and a Cadillac for Jerry Kennedy, Ron Pietrafeso and Police surgeon Gerald Starkey, along with Cadillacs for Linda Thompson and Joe Esposito's girlfriend, Shirley Dieu. In all the bill comes to $70,000.

In reporting the story of Elvis generosity to his police friends it is said that Denver television newsman Don Kinney joked on air that he'd like a car, too ('Elvis, if you're watching - I wouldn't mind getting a car too') and that Elvis buys him a Cadillac Seville. In the following, Don Kinney contradicts this and tells his story.

At that time I was working for Channel 4, hosting a morning program. It all started when we had to fill an extra 90 seconds at the end of a broadcast... I thought, 'My Lord, what are we going to do?' The crutch was, let's talk about the weather. So I said. 'In western Colorado for the next 24 hours it's going to be a little windy, and out on the eastern plains, it's going to be really windy, so nail down the cats and dogs'.

I see the 30-second cue go by, and at the point, I know we've got it. Barbara (Kinney's co-anchor) says, 'I'd really like to go up to Aspen. Maybe I'd bump into Elvis'. So I turn to her and say, 'How inappropriate can you get? Goodbye'! I walk back to the newsroom and Dave Minshall, who was a reporter then, says, 'Hey, I've got this guy on the phone. He wants to know are you here or in New York?' I said, 'Well, tell him I'm in New York'. And Dave says, 'No, come and talk with him'. So I walk over to this other phone and (the caller) says, 'Liked the way you handled her'. That was really good. 'Now would you like to have a car?' I said, 'No thanks. Who is this?' 'This is Elvis'. 'Sure. I'll tell you what, I've got a broadcast due. Thanks for calling'.

I was pretty pleasant about it, but you know. I walked back to my desk.

Not more than 20 seconds later someone screams at me to pick up the phone.

His first words were, 'No, really. I want to give you a car'. I said, 'Well thank you very much, but unless you can help me with this newscast, I don't want to talk to you. 'Bye'.

Two minutes later, the phone rings again. Each time he talks a little bit longer. Each time I essentially hang up on this somewhat pleasant but somewhat frustrating person.

Then, about the fifth call he says, 'Look, I really want to give you a car'.

And I said, 'Look, I really don't want a car. If you are who you say you are, I want an interview'. Suddenly, he was stumbling. I said, 'I have this broadcast to get done. I'll call you and set up an interview. What's your phone number?' I recognized it as a Vail exchange, and I thought, 'Oh, boy. Maybe I have an interview here'. About three minutes later, the phone rings again. He says, 'I'm not so sure I want to do an interview'. So I thought, 'Of course, this is a fraud'. He says, 'You seem like a nice guy. But I don't want to do an interview'. And I said, 'But it's your obligation to do an interview'. He's just kind of stammering, and then there's another voice on the phone. 'For God's sake, Don! He wants to give you a car!' I'm thinking this is a practical joke, and the guy says, 'This is Pietrafeso! Don't you know what's going on?' Then I was suddenly concerned. I put the phone down. It was a tense moment. The phone rings again. Somebody says, 'Elvis called. We're to provide you with a brand new car. Which one do you want?' I said, 'Wait a minute,' He said, 'There are six of them. There's a blue one, there's a pink one'. And I'm in an absolute panic about this noon broadcast.

The producer didn't show, so I'm doing two jobs and I'm a half-hour behind. So I said, 'Oh, the blue one. Now will you leave me alone!' I went to my boss and said, 'This is a big ethics issue. We can't accept this vehicle'.

He just broke into laughter.

I run back to my desk, and I'm working furiously. What an interesting thing. Here is the King.

When I was first beginning in radio in Montana in 1956, I would play his records on a program called Respectfully Yours. After doing that for about three months, I told the programming director that I was going to resign, because I couldn't stand playing Elvis Presley's music.

So you would think it's all over and about 40 minutes later, the news director comes out of his office at the far end of the newsroom and shouts across this long row of heads and desks to say, 'Hey, Kinney! The attorney says that you can accept the car!' -- Which we did.

Don used the car to drive his young sons back and forth between Denver and his family's farm in Montana. In 1985, after the boys had completed college, he donated the car to the Forney Museum. It had all of 22,600 miles on it. 'The boys and I were determined we would not profit from that gift. So the car will not be sold.

End of story'. Not quite. Don added this postscript:

One day in August 1977, Don and his sons were on the road to Montana when the Cadillac broke down. Later that day, Don heard a bulletin on the radio. Elvis was dead. 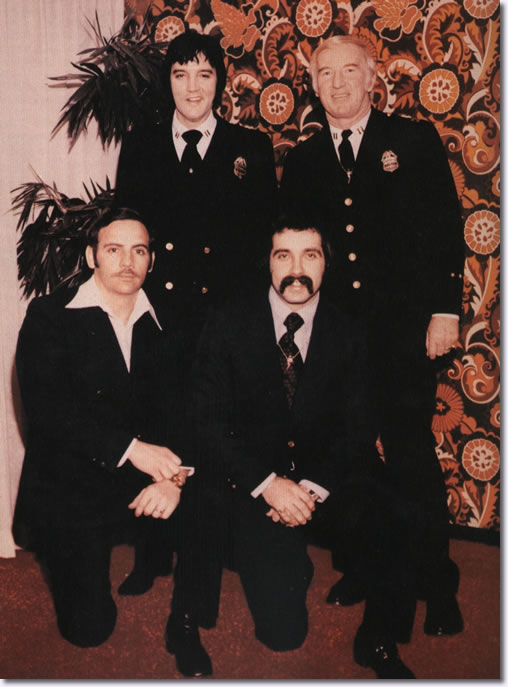