Hal Blaine, the Hall of Fame session drummer and virtual one-man soundtrack of the 1960s and '70s who played on the songs of Frank Sinatra, Elvis Presley on tracks like 'Return to Sender', 'Bossa Nova Baby', 'Viva Las Vegas' and the Beach Boys 'Good Vibrations' and laid down one of music's most memorable opening riffs on the Ronettes' 'Be My Baby', died Monday March 11.

Blaine died of natural causes at his home in Palm Desert, California, his son-in-law, Andy Johnson, told The Associated Press. He was 90.

Although he was the winner of a Grammy Lifetime Achievement Award last year, and member of the 'Wrecking Crew', Blaine's name was known by few outside the music industry, even in his prime.

In all, he played on 40 number-one singles and 150 records that made the Top Ten. In 2000, he was the first studio musician inducted into the Rock and Roll Hall of Fame.

Hal Blaine was a session drummer who worked with Elvis on a number of his movie soundtrack albums as well as the 1968 TV special 'Elvis'.

Mr. Blaine had been known for his expertise with exotic percussion, so he was first brought in to work on the soundtrack for the film 'Blue Hawaii' in March 1961. Blaine drummed on 'Can't Help Falling in Love', one of Elvis Presley's most memorable sides.

It isn't uncommon to have more than one drummer working on the percussion for an album, so Mr. Blaine joined D.J. Fontana on many more Elvis sessions in the 1960s. These soundtracks included the films 'Girls! Girls! Girls!', 'Fun In Acapulco', 'Roustabout', 'Paradise Hawaiian Style', 'Easy Come Easy Go', and 'Live A Little Love A Little'. 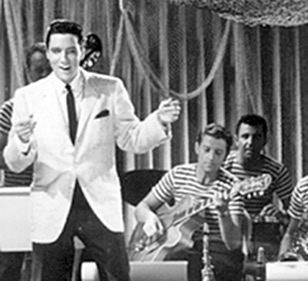 Hal Blaine can also be spotted in Elvis' backing bands in some of those films. (back right in photo above.)

Hal Blaine on working with Elvis:

One day, Blaine was asked to come to a meeting at Paramount, where he was told that they wanted him to be the drummer for a 'youth' movie that was going to be made in Hawaii. Then they brought the star in: Elvis Presley. 'Working on an Elvis movie like Blue Hawaii was a great learning experience for many of us in Hollywood', Blaine said. 'Rock and roll had been infiltrating the movie scene slowly but surely. After all, rock and roll was already a dominant part of the American radio scene'.

But when Blaine arrived at the studio to begin work on the soundtrack, old-fashioned recording methods were being used, including recording the drums with a single microphone. 'We started playing the chart', Hal recalled, 'and before long the producer of the film came out, complaining to the engineer that the music didn't sound like what he had been hearing on the radio. My drums sounded like they were a mile away. The producer asked me why they sounded so distant, and I explained how in Hollywood we put a mic in front of the bass drum and one on the snare, one on the hi-hat, and one or two overheads. The engineers told me I was nuts and that they didn't have enough lines or inputs to mike a set of drums that way. Nonetheless, some electrical people were called in, a few jerry-rigged connections were made, and some baffles were put in place. We cut the tracks again, and everyone agreed they were perfect. I became somewhat of a hero there and got called back for many soundtracks.

Hal Blaine listed the favorite tracks he worked on. One of the titles in his Top 10 was 'A Little Less Conversation'.

'Working with Elvis was always a wonderful experience. It was a thrill and quite a feather in my cap. Everybody was envious of me. Elvis was a terrific guy'. A straight-8 with a firm backbeat. The track was pure rock ‘n' roll. A lot of fun to play. There was me and Tommy Tedesco and a lot of the guys from The Tonight Show band. We had a great time. Bones Howe was on the faders, and he knew just what to do.

'Elvis never said anything about what we'd recorded, but that's how you knew you did something right. He only spoke up if he didn't like something. I can't imagine what he'd think about the song becoming a smash again several years ago [remixed by Junkie XL]. He'd probably be tickled pink. How many songs can you say that about? Not many'.