Ed Asner made his film debut in 1962, in the Elvis Presley movie Kid Galahad and again with the king in 'Change of Habit'. Asner is best known for his character Lou Grant, who was first introduced on The Mary Tyler Moore Show in 1970. In 1977, after the series, Asner's character was given his own show, Lou Grant (1977–82). 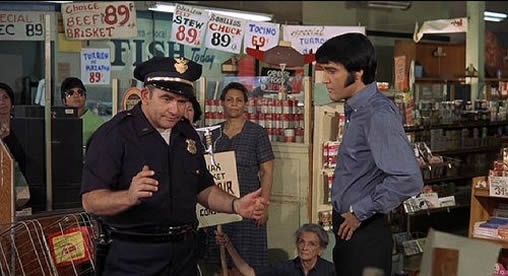 When asked what was Elvis Presley like to work with, Asners answer was; He was very nice to work with. I worked with him twice. I worked with him on 'Kid Galahad', and I worked with him on 'Change of Habit'. In 'Kid Galahad', his hands were all bandaged and broken up because he was in his karate stage at that time, breaking bricks. But he was a delightful young man to be around, never offensive, always seemed to work hard. Then in 'Change of Habit', he was a different young man at that point and seeming to be concentrating very seriously on being an actor.

Asner was born on November 15, 1929, in Kansas City, Missouri and grew up in Kansas City, Kansas. His Jewish Russian-born parents, Lizzie (née Seliger), a housewife, and Morris David Asner, ran a second-hand shop and junkyard. He was raised in an Orthodox Jewish family.

Asner attended Wyandotte High School in Kansas City, Kansas, and the University of Chicago. He worked on the assembly line for General Motors. Asner served with the U.S. Army Signal Corps and appeared in plays that toured Army camps in Europe.

Change Of Habit the movie

Elvis Presley on the set of Change Of Habit | Universal 1969

Interview with William A. Graham Change Of Habit Director