'My daddy had seen a lot of people who played guitars and stuff and didn't work, so he said: 'You should make up your mind either about being an electrician or playing a guitar. I never saw a guitar player that was worth a damn'.

Did you know that Elvis Presley possessed genuine rhythm guitar talent? According to contemporary Johnny Cash's 1997 autobiography entitled Cash, the 'I Walk the Line' balladeer concurred, considering Presley's skills as a rhythm guitarist to be significantly underrated. Having first encountered Presley on September 9, 1954 playing an acoustic Martin guitar during the special grand opening of Katz's Drug Store in Memphis, Cash next caught him wowing the spectators at the intimate Eagle's Nest nightclub.

Johnny Cash | The thing I really noticed that night, though, was his guitar playing. Elvis was a fabulous rhythm player. He'd start into That's All Right, Mama with his own guitar alone, and you didn't want to hear anything else. I didn't anyway. I was disappointed when Scotty Moore and Bill Black jumped in and covered him up. Not that Scotty and Bill weren't perfect for him - the way he sounded with them that night was what I think of as seminal Presley, the sound I missed through all the years after he became so popular and made records full of orchestration and overproduction. I loved that clean, simple combination of Scotty, Bill, and Elvis with his acoustic guitar. You know, I've never heard or read anyone else praising Elvis as a rhythm guitar player ....

Don't believe the Man in Black? Then check out Presley's historic early recordings with producer Sam Phillips at Sun Records in Memphis like 'That's All Right', 'Mystery Train', and 'Baby Let's Play House', the 1960 sessions at RCA Studio B in Nashville that firmly re-established the artist as a contemporary force after his Army sojourn (e.g. 'Reconsider Baby', 'I Will Be Home Again'), or the '68 Comeback Special NBC television broadcast.

On the 1954–1955 Sun recordings, it's just Elvis on vocals and rhythm acoustic guitar, Scotty Moore on lead electric guitar, and Bill Black on doghouse bass. There was no drummer present for ninety percent of the recordings, so Elvis Presley's acoustic guitar was crucial in driving the rhythm section. Anytime you are trying to pick Presley out in the mix, listen for the tell tale lick in E on the low strings on cuts like 'Funny How Time Slips Away' or 'One Night'.

In the unplugged video segment accompanying this article, Elvis sits in the boxing ring and takes over Moore's 1963 Gibson Super 400 guitar on the spur of the moment. If you wanna see the King of Rock 'n' Roll attack an electric guitar with unmitigated passion, the '68 Comeback Special is the ultimate way to go.

Elvis Presley built a legendary career around his unforgettable voice, but it wasn't his only instrument.

What instruments did Elvis play? He played guitar, bass and piano, and often toyed with instruments like the drums, accordion and ukulele. While he couldn't read or write music and had no formal lessons, he was a natural musician and played everything by ear. He could often hear a song, pick up an instrument, and play. He often played an instrument in his recordings, and always produced his own music. Elvis was simply born to create music and he was always learning new ways to do it.

Endlessly creative, Elvis often jumped at the chance to play around and practice with whatever musical instruments were available.

Elvis famously picked up a guitar as an 11-year-old in Tupelo, when his mother, Gladys, purchased a guitar for him for his birthday from Tupelo Hardware. He used that guitar all through high school, and even in his early career. He owned many more, and much nicer, guitars during his career, and used many prop guitars in his movies.

The guitar is the instrument most associated with Elvis, and while he was a good player, he wasn't a virtuoso. But what may be more important than that was the whole appearance: Elvis, the King of Rock 'n' Roll, always looked even cooler with his guitar in hand. He influenced many young fans to pick up a guitar, just like he did. If it wasn't for Elvis and his guitar, we probably wouldn't have The Beatles, Led Zeppelin, Bruce Springsteen and many, many more.

On May 3, 1957, Elvis and his band were working on a soundtrack session for 'Jailhouse Rock'. Bill Black had a difficult time laying down the bass line for '(You're So Square) Baby I Don't Care' on his new electric bass, and he eventually gave up, frustrated. Elvis surprised everyone by picking up the bass and playing the part - so perfect that Jerry Lieber performed a scratch vocal, and the two recorded the perfect instrumental master for Elvis to sing a new vocal track over.

When The Beatles visited Elvis in California in 1965, they all jammed, with Elvis on bass.

'He had a massive amplifier with a bass plugged into it, and he was up playing bass all the time...' John Lennon later recalled. 'So we just got in there and played with him. We all plugged whatever was around, and we played and sang'. 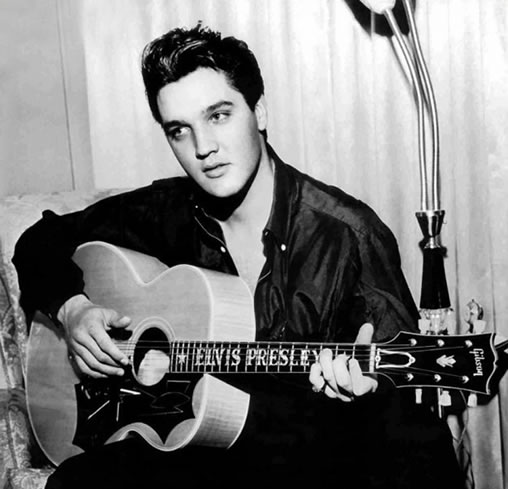 Elvis often played piano during rehearsals, and occasionally on stage. He especially loved to gather around a piano for gospel jam sessions. One of the most stunning Alfred Wertheimer photos features a 21-year-old Elvis sitting at a piano, playing and singing gospel songs to himself.

Elvis may have never played drums on an album or on stage, but Elvis - always full of energy and musical curiosity - tried his hand at the drums many times.

In fact, the very first gift his future wife, Priscilla Presley, gave him was a set of bongo drums.

Elvis, the accordion player? It's not exactly a rock star's instrument, but Elvis, who loved all kinds of music, never hesitated to pick up the instrument and see what he could play.

This photo was made right after a gig in Richmond, Virginia, on June 30, 1956. He wasn't tired after his performance; in fact, he joked around with a deck of cards and an accordion - performing a magic trick, perhaps? - all while chatting with reporters.

The Fifty Voices of Elvis Presley