Following is the wording of Elvis' epitaph as seen on his tombstone, written by Janelle McComb.

He was a precious gift from God
We cherished and loved dearly.

He had a God-given talent that he shared
With the world. And without a doubt,
He became most widely acclaimed;
Capturing the hearts of young and old alike.

He was admired not only as an entertainer,
But as the great humanitarian that he was;
For his generosity, and his kind feelings
For his fellow man.

He revolutionized the field of music and
Received its highest awards.

He became a living legend in his own time;
Earning the respect and love of millions.

God saw that he needed some rest and
Called him home to be with Him.

We miss you, Son and Daddy. I thank god
That He gave us you as our son.

A group of Elvis' close associates paid for and placed an eternal flame at the head of Elvis' tombstone.

The inscription by Janelle McComb is on its base, followed by the names that are inscribed on the sides:

TO ELVIS IN MEMORIUM

You gave yourself to each of us in
some manner. You were wrapped in
thoughtfulness and tied with love.
May this flame reflect our never
ending respect and love for you.
May it serve as a constant reminder
to each of us of your eternal presence. 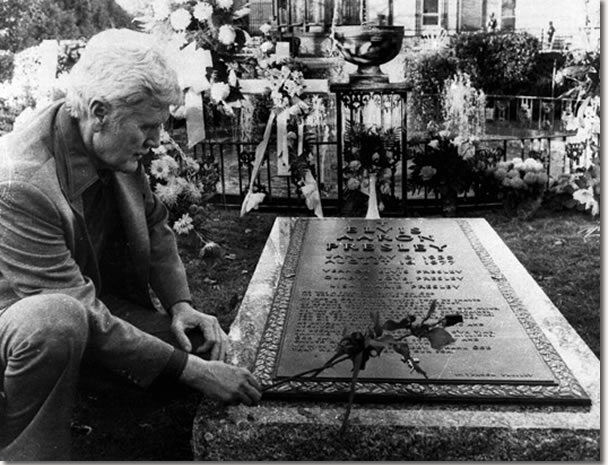 Vernon Presley, Elvis Presley's father, places a rose on his son's grave Nov. 24, 1977, as newspeople were permitted inside the grounds at Graceland in Memphis, Tenn., for the first time since Elvis' funeral.

Elvis dies and the age of Rock is over

Elvis' Last Will And Testament