Thirty-eight years after his death, the life of Elvis Presley is more than a nostalgic memory in the minds of his family, friends and dedicated fans. To some of the most devoted, it continues to be a fascination, pastime, or even a way of life. For years after Presley's death, surviving relatives would speak of him as if he were sometimes still alive. Revealed today for the first time, are little known secrets disclosed by a close relative of Presley who happened to work the legend's home for almost four decades.

'Elvis is good to his family and he is good to his fans', Harold Loyd told this writer in 1992, some fifteen years after his first cousin died on August 16, 1977. 'He would love knowing that fans still come to Graceland. He loves his fans'.

In May 1976, this reporter first met Loyd at the famous musical gates at the entrance of Presley's home, Graceland, in Memphis, Tennessee. Besides being a loyal cousin to the King of Rock and Roll, Loyd was obviously a dedicated ambassador to the fans who came daily to visit the home.

Loyd was generous with information and praise for Presley as he agreed to sit down at the Graceland gate guard shack for conversation and interviews each evening for a few days.

'Elvis first gave me a job here in 1961', Loyd explained. 'I worked as a groundskeeper, digging and planting flowers and shrubs, but soon I worked my way up to security and gatekeeper. I've been doing this ever since and I love it'.

'Elvis has always been very good to me', Loyd continued. 'Anytime I ever got into any kind of trouble or type of jam, he would always help me. He'd give me money-handfuls of money or write me a check---or he would send someone to pick me up if my truck wouldn't start. Simple things. People think they might know Elvis as the singer and movie star, but I am here to tell you he is more generous and full of love than any man I have ever met'.

Loyd explained that his mother, Rhetha, and Elvis' mother, Gladys were sisters from a family of eight siblings. During the interview, Loyd remained protective of Presley and would skirt around his answers to any questions that might place his cousin in a bad light. In 1992, he clarified what he would not dare reveal during the 1976 conversations.

'Our grandparents, the father and mother of our mothers, were Bob and Doll Smith', Loyd explained in 1992. 'We were about as poor as you've ever seen and Grandma was sick with TB (tuberculous) most of the time. Grandpa Smith sold moonshine to make ends meet because there were no jobs and Grandma needed help to be cared for, especially with all those eight kids'.

'Grandpa died when I was three-years-old (in 1931)', Loyd recalled. 'Everybody tells me Momma and Aunt Gladys were as close as any two sisters could ever be-very close. And even though they were young and moved out of the house just to survive, they stayed close to each other. Well, when Grandma died, the same year Elvis was born (1935), it was kind of a relief for the two sisters'.

'Not many people know this, but Aunt Gladys was a singer too', Loyd smiled. 'She was always doing odd jobs, being a maid and looking after children, so she could buy material to sew clothes for her brothers and sisters. She was always taking care of everybody. She sewed nightgowns for her mother who had to stay in bed all the time with TB'.

'But her favorite thing was just to sing and dance', Loyd added. 'Grandpa would let Aunt Gladys and my mother go to the dance hall there in Tupelo and everybody tells me could do every dance there was at the time: the Charleston, Lindy Hop, Jitterbug. And her voice was just amazing. She would sing all the time. That is some of my best memories, listening to Aunt Gladys sing and sometime Elvis and I would sing with her. It's no wonder he was the best ever singer'.

'When my mother died, Aunt Gladys became even more attached to me', Loyd said. 'I think it is because I represented and reminded her of the love of her sister'.

'She always told me I was her favorite', Loyd laughed. 'And Elvis told me the same and I had no reason not to believe them'.

'You see Elvis and I loved comic books, and we would trade or swap out our comics with each other all the time', Loyd told. 'When we were younger and I'd come over to play or they would come to visit us when my mother will still around, Elvis and I shared and played with each other's toys'.

'Elvis told me later that when his other cousins came over they would not take care of them and tear them up and not help put them away', Loyd continued. 'But with me, I took care of his toys as he did with the few I had---and we always helped each other put them up'.

In 1976, the public did not know about Elvis' father, Vernon Presley being imprisoned for a while for a forged check. The information did not come out until after Presley's death, as the few family members that did know about it kept it very quiet to protect his image. In 1992, Loyd was able to set the record straight:

'What I couldn't tell you was that Vernon was in jail', Loyd revealed. 'He was sent to the Mississippi State Penitentiary in Parchman, but that was after he already spent six months in the Tupelo (their hometown, where Presley was born) jail waiting for a trial'.

'Travis Smith, the brother of mine and Elvis' mothers, along with Vernon and a man named Lether Gable got involved in selling a hog to someone but was only paid $4-not at all what the hog was worth in them days---so Vernon got mad and put a '1' in front of the '4' or a '0' behind the '4' to make it either $14 or $40'.

'Uncle Travis told me Uncle Vernon just downright forged a check, so I heard the story both ways', laughed Loyd. 'Anyways, Vernon spent some good time in prison and Elvis was just a little one about three to five years old'.

'Gladys lost the house and her and Elvis moved in next door to live with Vernon's brother', Loyd added. 'We all lived near each other and they began to just hop around from family to family until Vernon could get out'.

'Elvis told me years later that I would never have to worry about money or a job', Loyd continued. 'He said he will always remember how kind we were to them and that he could always depend on us. Just thinking about how much Elvis cared for me and our family and how he took care of us---and he didn't owe any of us a thing---well, I love him and I miss him every day'.

'When Elvis was in about the first or second grade--it was during World War II-- Gladys was pregnant again', Lloyd said. 'Vernon had to go away for work with the WPA and one day Gladys had to go to the hospital. She miscarried that baby. That was two she lost because she lost Jesse Garon (Elvis' twin brother, who died during birth on January 8, 1935). We were all real worried about her because she almost died when Elvis was born and they had to take them to the hospital then, too'.

'We always said that was why she was so protective of Elvis', Loyd stated. 'When those two were together they were so close, they would pet each other and talk a different language that hardly any of us could understand. They were just remarkable in how much they loved and cared for each other. It was about the saddest day when Aunt Gladys died. I rushed as fast as I could to Memphis (from Mississippi) to get to Elvis that day'. 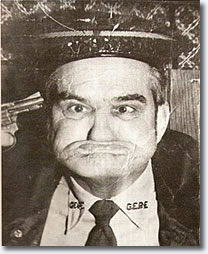 Loyd said there were many 'fun and funny' moments working at Graceland for so many years, but his favorite was that time Loyd walked into the den, now called the Jungle Room, of Graceland were Presley and his friends were sitting.

'Elvis saw me and just laughed at yelled, 'Get the hell out of here Harold'! I said OK, but I need to take care of something first', Loyd reminisced. 'Elvis yelled it out again and I don't know how I did it without cracking up, but I turned around at him, picked up my cap, turned it around side-ways and made this terrible, ugly face, one that he had never seen before'.

'Elvis almost fell over and threw up both hands in the air and they all started laughing their heads off. Elvis just said 'I'll see you later, Harold' and as I got out the door I could hear him cracking up 'that is the ugliest damned thing I've ever seen'!'

'Later on we played a trick on Elvis and we took a picture of me with that same ugly face and we blew it up an 8x10 and had it framed', Loyd laughs. 'Well, when Elvis was on stage in Las Vegas in December 1975, handed it suddenly to Elvis during his show and when he saw what it was all he could do was crack up in front of everybody. Elvis turned it around and showed it to the band and singers and then they started cracking up too. Finally he turned it to some of the fans that could see it at the front of the stage and they all laughed with him. They told me for the rest of the show he would look over at the picture up on top of the piano where he put it and start laughing all over again'.

'Well, that made me feel real good that I could make Elvis laugh', Loyd said. 'He is my cousin, and I love him and it was just a wonderful thing to hear that after that he kept that picture in his dressing room there at the International Hotel so he could look and laugh at it before he would go on stage every night'.

Read what Harold Loyd has to say about Jerry Lee Lewis' arrest at the gates of Graceland.