In praise of Elvis on Camden

The second Elvis album I ever bought was Burning Love And Hits From His Movies, back in the early 1970s on cassette, from the downtown independent record shop where the staff always looked too hip to be selling Elvis records. Back home, on my tinny cassette recorder, Burning Love pounded out. Somehow I'd missed it on Top Of The Pops but I loved the pounding beat, driving guitar and Elvis' bayou rock vocal.

And then the mood changed with Tender Feeling. I didn't know very much about Elvis then but I could tell it had been recorded years ago. Puzzled, I studied the sleeve and read through the song titles again: Guadalajara, Santa Lucia, I Love Only One Girl. What was this?

I instinctively knew that none of these were really 'hits from his movies'. But I listened out of curiosity. In its bizarre, almost wilfully perverse way this budget album was the perfect introduction to Elvis' musical universe. Here was a singer who could rock with Burning Love, soothe with It's A Matter Of Time, woo with Tender Feeling and sound utterly sincere while belting out: 'I love only one girl, I love only one girl, one in every town!' After listening to that production number from Double Trouble, I spent years wondering what an exotic 'moraflore' dessert was before finally checking the lyrics and realising that Elvis was actually singing 'amore for dessert'.

I could have been repelled, disgusted and baffled. Instead I was hooked by Colonel Parker's frankly mad wheeze. All the other singers and groups I knew had their thing - you always knew what their singles would roughly sound like - but Elvis was a law unto himself. Who else could take you from the childish, cloying, meek How Would You Like To Be? to the pertinent anger of Big Boss Man in just two tracks?

So, with pocket money reasonably tight, I used the Camden releases to tide me over between Christmas and birthdays when I could afford a proper Elvis album. Next was Elvis Sings Hits From His Movies Volume 1, never a firm favourite although I loved the brio of Long Legged Girl, followed by the very listenable I Got Lucky and the curio that was Elvis Sings Flaming Star (on which Tiger Man blew all the other tracks away) and Almost In Love, a truly odd compilation containing the psychedelic Edge Of Reality, the foot-tapping Rubberneckin' and the regretful romance of My Little Friend, on which the violins sounded like chainsaws. My favourites were - and still are - Let's Be Friends, Separate Ways and You'll Never Walk Alone.

I remember marvelling over the sleeve of Separate Ways - the UK release had Elvis superimposed on a highway where traffic went its, er, separate ways - thinking it the height of album cover design. It should look rubbish but there's something in the designer's simple-minded faith - the conviction that it was enough to put Elvis on a freeway - that still kind of works. The songs were good too: not just the title track, but Always On My Mind, the heartfelt In My Way, the masterful mumbling of Is It So Strange and the beautiful, small town bitter sweetness of I Met Her Today.

You'll Never Walk Alone, the only budget gospel album, had a very tasteful sleeve and plenty of thoughtful sacred music - from the stirring title song to Who Am I?, the funky Let Us Pray and the brilliant There'll Be Peace In The Valley. Even this pales beside the glory of Let's Be Friends. One of Elvis' many gifts as a singer was his ability to plant a lyric inside your head, almost as if you were in a trance when the song played, and I am still almost word perfect on the title track. I loved too the mournful romantic ballad Almost, the swagger of his take on Bobby Darin's I'll Be There and the plaintive haunting refrain of If I'm A Fool For Loving You. I'm still charmed by Have A Happy, enamoured of Charro! (the lyric, with its line about 'with eyes that hide the man within', seems oddly to allude to Elvis' own life to come) and intrigued by the lecturing social protest of Change Of Habit. 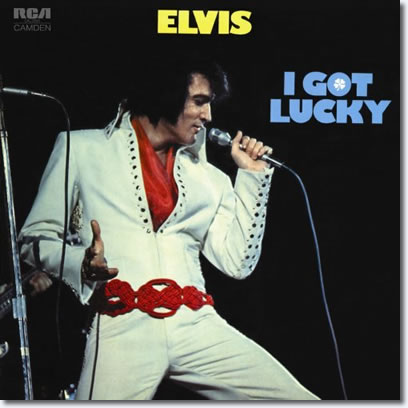 As a collection, they cost me very little and gave me much pleasure.

Collecting them was a strange musical journey around Elvisdom. I didn't know - I hadn't seen the film then - why so many dogs barked at the start of Guadalajara but the puzzle only seemed to make the singer more mysterious and exotic. The only track I couldn't stomach - and this might explain my antipathy to the Hits From His Movies 1 album - was Old Macdonald though - I had to stick my fingers in my ears in parts of Confidence (the bit when he sings 'and an I and a D and an ence').

I'm not saying this is the best or most demanding music Elvis ever made but these albums bound me to him.

In an odd way, Have A Happy and Clean Up Your Own Backyard (the high notes when he sings 'Aw don't you hand me none of your lies' still thrill me) were as much part of me falling in love with his voice as One Night or His Latest Flame. And the studio offcuts and movie tracks from the late 1960s shed a useful light on a very odd time in his life and career when everything - even his musical direction - was uncertain.

You can hear him trying stuff on Edge Of Reality, Almost In Love and A Little Less Conversation - as if he was ready to explore any strange byway and highway.

Besides, once you've forgiven your idol for not hurling the sheet music to Old Macdonald into the studio bin, you know you're seriously hooked. And the Camden releases taught me one very valuable lesson about Elvis' music: you may find gold when you least expect it.