Inside Follow That Dream : Fans Remember : On The Set With Elvis

Building a Beach for Elvis

When Elvis Came To Yankeetown
By Jeff Kunerth of The Sentinel Staf (August 14, 1987)

In 1961 Elvis made the movie 'Follow That Dream' in Yankeetown, Florida. In the weeks before filming began, the moviemakers had converted the tip of a marshy little island into a slice of paradise for Elvis Presley.

Thick underbrush was cleared on a point of Pumpkin Island near the bridge over Bird Creek. Tons of fill dirt and white sand were dumped on the island's edge to create a pristine beach. Palm trees were planted, but quickly died and had to be painted a pseudo-healthy green. A thatch-roofed shack costing $20,000 and a boat dock were constructed on the beach. A telephone pole was turned into a palm-tree trunk, and a portion of State Road 40 was painted black to resemble a newly completed road.

'They were changing the land, and these people were wheeling in and out in their big limousines', said Pat Langley, 40, an English teacher at Dunnellon High School. 'It was big excitement'. Two 17-year-old high school students, Johnny Jones and his twin brother Tommy, were hired to build the beach. 'Every day, they would pick us up in a white limousine to shovel dirt. Then the limousine would take us home. It was so big you couldn't touch the front seat from the back seat', said Johnny Jones, now 43 and a Dunnellon High math teacher. 'We built a beach for the beach scene and they didn't like it, so we had to build them another one'.

After the beach was built to the producers' satisfaction, the Jones brothers got to stick around and do odd jobs on the set. Looking back, Johnny Jones sees that he and his brother missed an opportunity to exploit their insiders' position by taking photographs and collecting movie-set memorabilia. 'If we had realized this was going to be a big deal there was lots of stuff we could have done like take pictures', said Jones. Instead, the brothers' attitude was: 'Elvis Presley was there, fine, but we were just interested in working at a summer job'.

Tommy Jones was savvy enough, however, to collect autographed chunks of broken concrete blocks and boards that Presley had used for karate practice, and to distribute them to local girls.

For one movie scene, the Jones brothers joined about 20 other Yankeetown residents on the Bird Creek bridge, where everybody pretended to fish. 'We fished for rubber fish'. They were paid $20 apiece for 15 minutes work.

On location for the picture 'Follow That Dream'. Elvis at the bridge seen in the movie for the fishing scene.

Pumpkin Island was partially owned by real estate agent Ollie Lynch, who became the movie company's local talent scout. It was Lynch who recruited the rubber-fish fishermen, and rousted a neighbor out of the shower to play a gangster. Lynch himself appears briefly in the movie as one of the gangsters -- a role he won by virtue of possessing a fedora. 'Half the people in town were in the movie somehow', said Lynch, 69. 'It was something new and exciting for a little town like this. Nobody here had seen a movie filmed before. I'd say it was about the most exciting time this town has ever seen. 'What impressed the townsfolk most was the film crew's preponderance of limousines. Lynch said he was astounded to see limos called to cart Presley and the other actors 200 yards from the movie set to the dressing room trailers.

Between filming sessions , the Bird Creek bridge was left open so fans and gawkers could drive by slowly and try to catch a glimpse of Elvis horsing around with his bodyguard buddies or tossing rocks at blue crabs.

Presley pilgrims flocked to Yankeetown from throughout the state, creating the first call for traffic control in the town's history. A 16-year-old Orlando girl, Gail Burckhalter, was one of those who patrolled the Bird Creek bridge to get a peek at Elvis. She, her 18-year-old sister-in-law, and a couple of others followed the film crew to Ocala, where a scene was filmed at the Commercial Bank. They went to Crystal River to try to find where he was staying. Unsuccessful in their pursuit of Presley, the girls were at a Crystal River ice cream stand when a line of limos passed by. They hopped back into their car and gave pursuit. At the circular driveway of the Port Paradise Resort, the girls went the wrong way and came headlight-to-headlight with an old station wagon. The station wagon's door opened and Col. Tom Parker stepped out, followed by Elvis Presley.

The stunned girls tumbled out of the car. Presley chatted with them and then agreed to pose for a picture with Gail and one of the other girls. Gail's sister-in-law snapped the picture. It was the only one they took.

'To this day, she is so mad she isn't in the picture', said Burckhalter, 42. 'We were so surprised, and he was so charismatic, and we had the whole roll of film and took one picture. He talked to us a good 15 minutes, but I don't remember what we said.'Even so, she said, 'It's a day none of us will ever forget'.

'When the filming in Yankeetown was finished, the movie set was removed. The palm tree trunk turned back into a telephone pole. The dock was dismantled. The $20,000 shack was donated to the Florida Sheriffs Boys Ranch in Live Oak, where it is still in use. Whatever the moviemakers left behind, like the artificial white-sand beach, was reclaimed by nature. Today the Yankeetown movie site looks much as it did before Elvis Presley arrived -- an impenetrable stand of shrubs and palmettos bordered by black reeds and roadside litter.

What the movie's producers couldn't remove nor time erase are the memories and small mementos that longtime residents of Yankeetown still possess. Ollie Lynch kept a copy of the movie script, a rubber fish, and an autographed snapshot of Elvis Presley standing on the Bird Creek bridge.

Everyone assumed we were part of the crew. We got out and walked through the outside corridor of the Hotel. As we passed by one area we saw Elvis sitting outside resting by the water. I was chicken but my Mother was brave and she walked over to where he was sitting with actress Ann Helm. I felt silly standing there so I followed. My Mom said something like 'Elvis, would you mind if two Florida girls took your picture?'

He was really nice and stood up and leaned on an umbrella table.

Elvis kept tapping his fingers on the umbrella while mom was trying to take the picture and my Mom told him to 'stay still!' He Laughed and told her 'If I had stood still, I wouldn't be where I am today'. 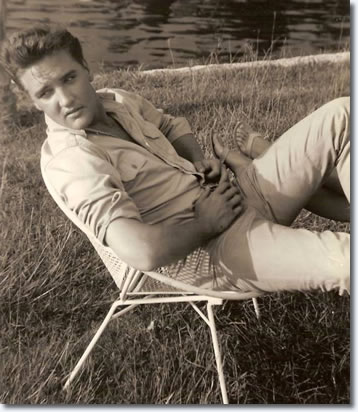 Elvis Presley relaxing at Port Paradise Hotel in Crystal River after shooting the movie scenes all day at Yankeetown. 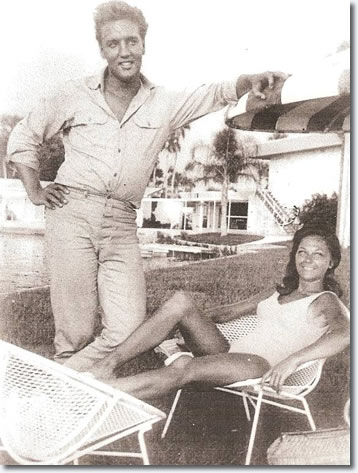 Elvis Presley and co-star Ann Helm at Port Paradise Hotel in Crystal River after shooting the movie scenes all day at Yankeetown.

Elvis saw my engagement ring and told me I was too young to be engaged and I told him Tom is a very nice guy. He said I have pretty eyes and remind him of someone he used to date. I tried to act real cool and told him 'I am not like those other girls that faint and scream'. I was acting, I thought, cool!!

Well, the next day we drove up the watch the movie shoot again.

I had not had breakfast and we were standing on a bridge looking down on the set and we were standing in that 'Hot August Sun'. I looked over at my mom and said 'I don't feel so good!' The next thing I remember, I was being carried by a State Trooper and laid on the back of a truck and they put ice on my head and neck.

I was so Embarrassed!

I knew Elvis could see what had happened and after all, I was the cool one that didn't faint!

At that time I was taking a photography class at Dixie Hollins High School and when I brought my pictures in no one believed that I had really met him. They thought I had used a Telephoto lens to take his picture.

So the next day we all went up to see Elvis. I knew where he would be at lunch time so we went to the park.

We told him a 'little white lie'.

We told him the other pictures didn't come out and thats when I got the picture of Elvis and I together.

We were so bad! 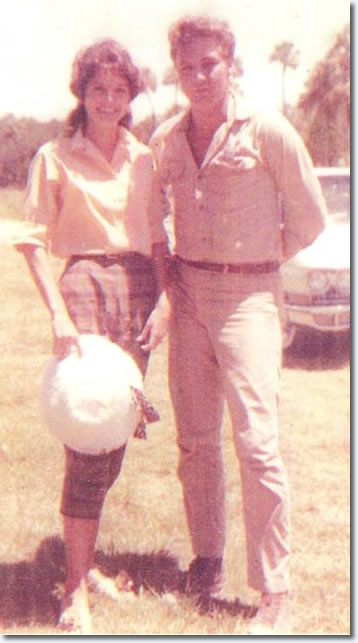 Elvis had told me I was too young to be engaged when he saw my ring and asked if it was an engagement ring. Well that was August 1961 [and] Tom & I married June 24th, 1962 .and have been married for 48 years.

Well I guess Elvis got that wrong about me being too young to be engaged haha.

Elvis was very nice and quite respectful when I met him, he acted like a southern gentleman. He had a sense of humor, even when they tried to shoot the movie he would make jokes and laugh.

When we were down at the nearby park where everyone went after the shoot for lunch. I have one picture where he was getting into his Cadillac, he had been cutting up and trying to throw chocolate pudding on the other actors, he just was very fun loving. When I met him he had just gotten out of the Army and also had just lost his Mom and I told him how sorry I was for his loss, he was nice to talk too. 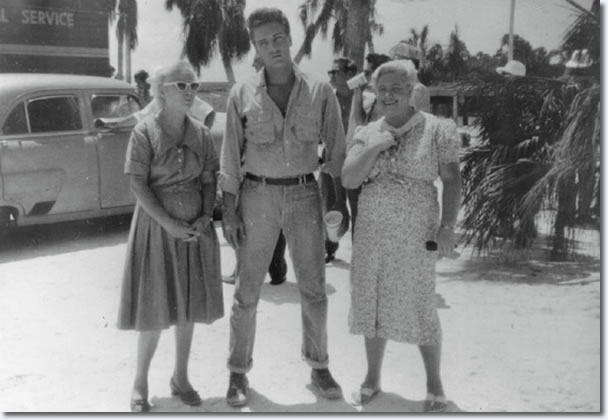 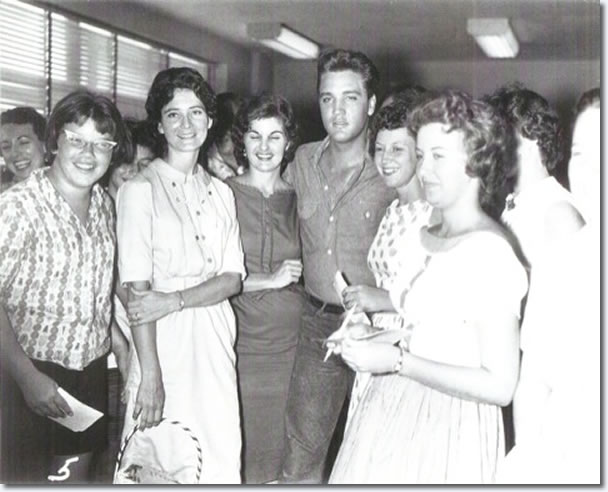 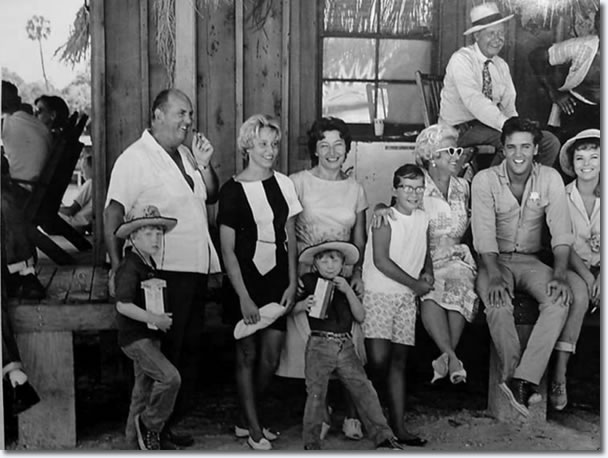 Compiled by David English / Edited by David Troedson 2010/11 with help from Suzanne Bland.