In this interview Milton Berle who talks about Elvis and his appearance on 'The Milton Berle Show', about his first meeting with Elvis that occurred when his manager wanted Berle to audition him. It was his second appearance on The Milton Berle show that Elvis' performance of 'Hound Dog' drove the audience wild and had the press and some of the viewers appalled. It is one of his most controversial performances.

By the end of 1955, Elvis Presley had nearly 18 months of nonstop touring behind him and two dozen singles already under his belt, though his only hits were on the Country and Western charts. He was a hardworking and hard-to-categorize up-and-comer, but the next six months would make him a superstar. It was his debut single on RCA/Victor, his new label, which propelled Elvis to the top of the pop charts. But if 'Heartbreak Hotel' is what made him the king of the radio and record stores during the spring of 1956, it was television that truly made him the King of Rock and Roll. And if any one moment might be called his coronation, it was his appearance on The Milton Berle Show on this day in 1956, when he set his guitar aside and put every part of his being into a blistering, scandalous performance of 'Hound Dog'.

This was not Presley's first television appearance, nor even his first appearance on Milton Berle. Between January and March 1956, Elvis made six appearances on Tommy and Jimmy Dorsey's Stage Show, and on April 3, he appeared for the first time with Uncle Miltie. But every one of those appearances featured Elvis either in close-up singing a slow ballad, or full body but with his movements somewhat restricted by the acoustic guitar he was playing. It was on his second Milton Berle Show appearance that he put the guitar aside and America witnessed, for the very first time, the 21-year-old Elvis Presley from head to toe, gyrating his soon-to-be-famous (or infamous) pelvis.

Reaction to Elvis' performance in the mainstream media was almost uniformly negative. 'Mr. Presley has no discernible singing ability….For the ear, he is an unutterable bore', wrote critic Jack Gould in the next day's New York Times. 'His one specialty is an accented movement of the body that heretofore has been primarily identified with the repertoire of the blonde bombshells of the burlesque runway. The gyration never had anything to do with the world of popular music and still doesn't'. In the New York Daily News, Ben Gross described Presley's performance as 'tinged with the kind of animalism that should be confined to dives and bordellos', while the New York Journal-American‘s Jack O'Brien said that Elvis 'makes up for vocal shortcomings with the weirdest and plainly suggestive animation short of an aborigine's mating dance'. Meanwhile, the Catholic weekly America got right to the point in its headline: 'Beware of Elvis Presley'. 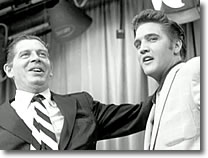 Milton Berle was born, Milton Berlinger on July 12, 1908 and died March 27, 2002. Milton Berle, was an American comedian and actor. As the manic host of NBC's Texaco Star Theater (1948–55), in 1948 he was the first major star of US television and as such became known as Uncle Miltie and Mr. Television to millions during TV's golden age. NBC signed him to an exclusive, unprecedented 30-year television contract in 1951. The problem with Berle's 30-year deal was that NBC could not have realized the relatively short lifespan of a comedian on television, compared to radio, where some careers had thrived for two decades. In part, this was due to the more ephemeral nature of visual comedy (those who do not adapt quickly do not survive), and a single television appearance could equal years of exposure on the nightclub circuit.

Texaco pulled out of sponsorship of the show in 1953. Buick picked it up, prompting a renaming to 'The Buick-Berle Show', and the program's format was changed to show the backstage preparations to put on a variety show. Critics generally approved of the changes, but Berle's ratings continued to fall and Buick pulled out after two seasons. By the time the again-renamed The Milton Berle Show finished its only full season, Berle was already becoming history - though his final season was host to two of Elvis Presley's earliest television appearances, April 3 and June 5, 1956. The final straw during that last season may have come from CBS scheduling 'The Phil Silvers Show' (aka 'You'll Never Get Rich' and 'Sergeant Bilko') opposite Berle. Ironically, Silvers was one of Berle's best friends in show business and had come to CBS' attention in an appearance on Berle's program. Bilko's creator-producer, Nat Hiken, had been one of Berle's radio writers.

Berle knew that NBC had already decided to cancel his show before Elvis appeared.

Milton Berle talks about Elvis and his appearance on 'The Milton Berle Show', about his first meeting with Elvis that occurred when Colonel Parker asked Berle to audition him. It was on his second appearance on The Milton Berle show that Elvis' performance of 'Hound Dog' drove the audience wild and had the press and some of the viewers appalled. It is one of his most controversial performances. It was also Elvis at his best.

About ten days later Berle called Colonel Parker to tell him that based on the 'hundreds of thousands of 'pan' letters' he had received following the show that 'you have a star on your hands'. 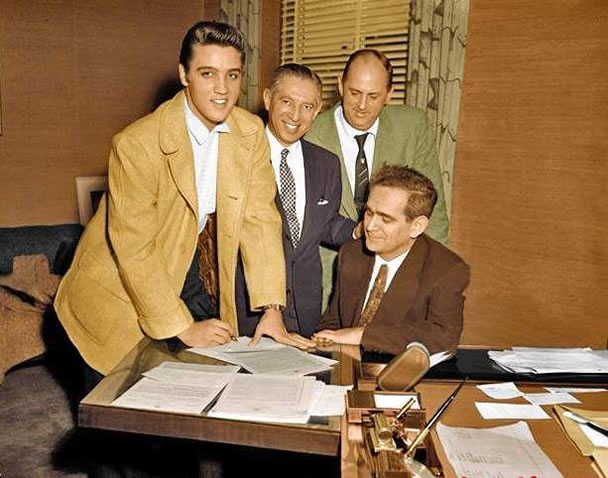