Elvis Presley greatly admired Jackie Wilson and first saw him perform in 1956 in Las Vegas while Jackie was lead singer with The Dominoes. Elvis really liked Jackie and thought he was a terrific showman. Likewise, Jackie greatly admired Elvis. Both Elvis and Jackie share a connection with Mississippi.

Although Jackie was born in Detroit, his parents had moved up from Columbus, Mississippi in the 1920s. Like Elvis, Jackie had an unbelievably close relationship with his mother: they virtually lived for each other. Jackie, too, was an only son. Jackie was only seven months Elvis' senior, but he had first recorded in 1952. He would have a somewhat harder slog on the road to success than Elvis.

Elvis can be heard talking about Jackie Wilson (although he has no idea of Jackie's name) during 'The Million Dollar Quartet' session in 1956. Elvis talks about a group he'd seen in Las Vegas: Billy Ward And The Dominoes.

In Elvis' own words: 'I heard this guy in Las Vegas - Billy Ward and his Dominoes. There's a guy out there who's doin' a take-off of me; 'Don't Be Cruel'. He tried so hard, till he got much better, boy; much better than that record of mine ... Later, Elvis would get to know Jackie and they became good friends.

Elvis went to see Jackie perform whenever he was able and used some of Jackie's stage techniques in his performances. Jackie would later say, magnanimously, 'I took as much from Elvis as he took from me'.

'A lot of people have accused Elvis of stealing the black man's music, when in fact, almost every black solo entertainer copied from Elvis'. Jackie Wilson

Sonny West, who was a close friend of Elvis' and one of his inner circle for many years, said; 'Elvis loved Billy Ward, Billy Daniels, Billy Eckstine, the Inkspots - he loved all of them. He took something from all of them and it all came together in his voice at different times. Jackie was rhythm and blues; Elvis would tell you that the influence of gospel singing and rhythm and blues helped form his style of singing. And what came out was rock 'n' roll ... somehow they got together and you had rock 'n' roll.

Jackie left The Dominoes in 1957 to follow a solo career.

Once he was famous Elvis only went out in public on rare occasions, but in 1966 Jackie Wilson was performing at The Trip Nightclub in Hollywood and Elvis wanted to see him perform. The Trip is a small club seating only a few hundred, but James Brown and The Rolling Stones also showed up.

In Elvis Presley, Last Train To Memphis: The Rise of Elvis Presley, author Peter Guralnick describes the meeting between the two backstage at The Trip: 'In between sets Elvis finally got the opportunity to meet Jackie and express his unreserved admiration for Wilson's talent. With all he had going for him, Elvis said, he could see no reason why Jackie shouldn't be the number one singer in the world'. It was a wonderful tribute which Jackie would have appreciated. Jackie's drummer Jimmy Smith recalls; 'Elvis came to the club in a white suit and a white Rolls Royce. I said, 'That man's got style, ain't he?'

Jackie said of Elvis' visit; 'Elvis did me a nice favour once. I was in Hollywood, California, playing a club called The Trip and we were having a little difficulty getting people to come out at that particular time. So he came out twice for me and, well, you couldn't get in. They said if Elvis goes, well ... hey, let's go'.

Elvis invited Jackie out to the movie set to see him. Jackie took up the offer, visiting Elvis at MGM, where they had photos taken like two old friends. Elvis signed the photo for Jackie, writing 'Jackie, you have a friend forever, Elvis'. Jackie carried the photo everywhere thereafter; it was a treasure. 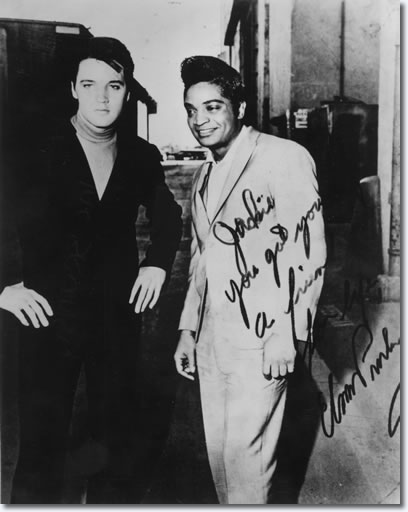 In September 1975, Jackie suffered a heart attack on stage in New Jersey. For the next eight and a quarter years he survived in a state between life and death, unable to communicate for the entire period. He died in January 1984 and was buried in an unmarked grave outside his home city of Detroit.

Above from Jackie Wilson: Lonely Teardrops by Tony Douglas

How Did Elvis Get Turned into a Racist? - By Peter Guralnick

Elvis Presley and Stephanie Spruill back stage at Ceasers Palace

Eddie Murphy on Racism and Elvis

How Elvis Fought Racism, Ethnic Discrimination (By an Arab-American, 2007)