That was the day Elvis Presley stopped by Memphis' Sun Studio and recorded an impromptu session with Johnny Cash, Carl Perkins and Jerry Lee Lewis. 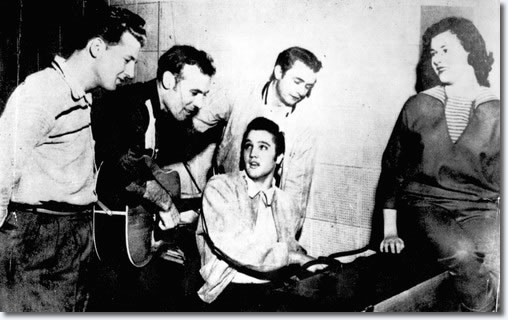 Historians have long believed Evans was there too because she was dating Presley then and a voice assumed to be hers appears on the recording. Also, a local newspaper photographer captured an image of the brunet alongside the famous foursome, which the paper dubbed the Million Dollar Quartet.

'That lovely creature sitting on top of the piano', the caption for the photo read in the next day's newspaper, is 'Marilyn Evans, who dances at the New Frontier in Las Vegas. She is Elvis' house guest thru Friday'. Unlike some other Elvis exes, Evans didn't make a career out of her companionship with The King, and Elvis enthusiasts have long wondered what happened to her after her week in Memphis. Colin Escott, a music historian and co-author of the play 'Million Dollar Quartet', now playing at Chicago's Apollo Theater, has called her the 'the least known of Elvis' girlfriends', which was true.

Until today. Two weeks ago, the Tribune ran a story about the missing-girlfriend mystery, explaining why the 'Million Dollar Quartet' show features a fictitious Elvis girlfriend, 'Dyanne'. For 52 years she has hidden in plain sight, a living, missing link to one of America's most magical music moments.

Here is her story.

When a promoter called Marilyn Evans in summer 1956 and asked her to join the chorus line at Las Vegas' New Frontier Casino, she could hardly contain herself--this teenager from Fresno, Calif., lived to dance. 'I thought it was probably the most sophisticated thing that had ever happened in the whole world', she said last week with an easy laugh.

She came to a Las Vegas in its infancy, a relatively innocent place, where the dancers enjoyed good pay--$135 a week--sports cars and soirées with such headliners as Mickey Rooney and George Chakiris. 'It was just very exciting: two shows a night, seven days a week', she said. 'I was loving it'. Between shows, the dancers would gather in an employees-only coffee shop within the casino. It was there that Elvis walked in one night and sat at their table. 'Wow', Evans thought. 'He's beautiful--really, truly'. Within an hour, Elvis had slipped Evans a scrawled note on the back of a napkin.

It read: 'Can I have a date with you tomorrow night or before I leave?' Evans nodded in excitement and shock. 'He called backstage that night, set a time', she remembered. And so, for the next couple of weeks she and Elvis explored Las Vegas, driving around, hanging out and walking through the casinos. (Neither enjoyed gambling, she said.) Asked why he picked her, she giggles and shrugs. 'I think he probably liked that I wasn't 'out there'. I was respectable', she said. 'I still am respectable, you know!'

And what did this respectable teenager's parents think about her dating Parental Enemy No. 1 Evans' father had died when she was in high school, but to head off any trouble she wrote her mother a letter that began, 'Don't flip, mama, but I've become acquainted with Elvis Presley'. Momma did flip, a little; that is, until Evans put the young star on the phone.

'He seems like a very nice person', her mom, L.E. Evans, informed The Fresno Bee in December 1956, after word of the relationship leaked. 'Elvis told Marilyn he likes her because she doesn't act like a show girl, because she's real'. Like Evans, Elvis too was performing at the New Frontier -- his first Vegas engagement--but when he left, the couple kept in touch by telephone. Then one day, he called Evans and asked her to come visit and stay at his Memphis home She said yes. And so, 52 years later, what does she remember most about the house? 'I remember that phone just rang and nobody answered, which was odd'.

In Memphis, Elvis and Evans spent their days riding motorcycles, going out to eat and watching rented movies at Elvis' house, a luxury the girl from Fresno could hardly believe. 'He was relaxed. He was comfortable there', Knowles-Riehl recalled. And at night she slept ... 'not with him'. 'He was extremely honorable. He was young; I was young'. On Dec. 4, 1956, the couple, along with some of Elvis' friends, cruised around Memphis, as usual. But on this day Elvis stopped at Sun, where he had made his first record only three years prior. 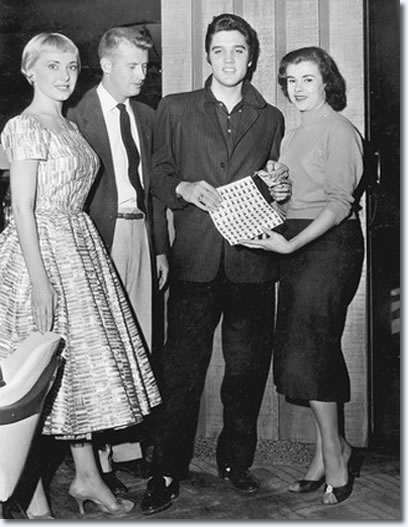 It was there, over the next few hours, that fate (and a tape recorder) would allow a rare glimpse of the musical passions of these four future legends, as they jammed on gospel, country and blues. It was a seminal session of rock 'n' roll's origins ... and one that Knowles-Riehl barely recalls. 'I remember that outfit I was wearing was all wool', she said with a shrug of apology. 'A lot of water has passed under the bridge since then'. The fact that the session meant so little to her might help explain why she said she felt fine when the relationship faded a few weeks later.

'I always preferred classical music', she explained. 'We were just into different things, not that one's better than the other'. 'It was great, I loved it, it was terrifically exciting and wonderful, but I had other things I wanted to do', said Knowles-Riehl who, the next year, began attending the University of Utah. Asked why she never broadcast her brush with stardom, Knowles-Riehl said she never thought it among her life's highlights. Instead she prefers to gush about her two husbands--her first died--her son and a dancing career that includes 13 years as the director of the Fresno Ballet.

'It's like people whose high point of their life is their senior prom', she explained. 'My senior prom was good, but a lot of stuff has happened that's been great since then'. Such as ..'When it's not driving me crazy, I enjoy genealogy', said Knowles-Riehl, who divides her time between Carmel, Calif., and Salt Lake City. She also continues to dance--thanks to the fitness of a 40-year-old-- and she runs her own belly dancing troupe.

'It's pretty much the opposite of all my training, but I love it', she said. Until last week, Knowles-Riehl had never listened to the recording session from that day in Memphis. But when she did, she quickly nixed the popular theory that she's the one who requested the song 'Farther Along'. 'That's not me', she said, as the female voice on the recording speaks with an obvious drawl.

'I wouldn't pick up a Southern accent that fast', she said, chuckling. And yet, in listening to the rest of the album from that day's session Knowles-Riehl stumbled upon another female voice, this one requesting 'End of the Road'. 'That's me', she said, as her wide brown eyes grew wider. 'It's like otherworldly', she said of hearing herself, 'out of body'.

With the headphones still on, Knowles-Riehl appeared in that moment as she does in the '56 photograph: Her face bright and blushing, wondering how could it possibly get any better than this.