Charlie lost his battle with lung cancer Friday March 3rd. Charlie was diagnosed with lung cancer in December 2005 and despite this, he continued to perform at Memories Theatres for the love of his fans. He had a couple of treatments of radiation therapy in between December and January. Charlie first met Elvis on the transport ship from the New York to Germany, September 1958, although they appeared together on a Red Foley show in 1956. They stayed friends until Elvis' death in August 1977. Charlie was the guy who sang back up, played guitar, handed Elvis water and gave him scarves on stage during the shows in the 1970's. Also, Charlie had a big influence on the song lists of the seventies shows. He used to suggest song titles to Elvis. 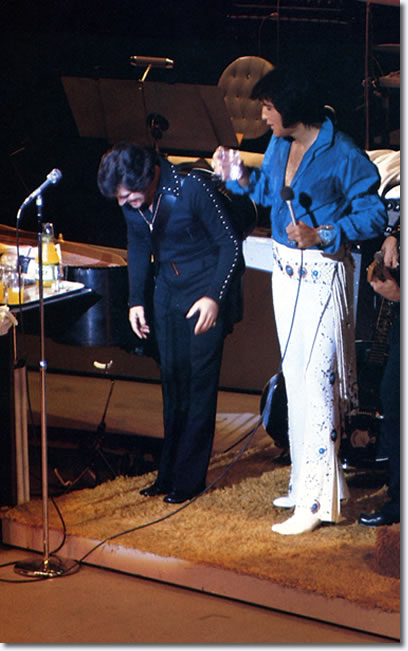 We'd like to express our sincere condolences to his family, who stood with him in the last months of his life. Despite his medical battle, and despite the fact that he couldn't perform on stage anymore, Charlie stayed optimistic until the very end. Charlie Hodge not only got the audience's attention when he performed on an empty Coke crate. He got the attention of a music legend. Charlie said that the first time Elvis Presley saw him, he was standing and singing on the crate while performing with The Foggy River Boys in Memphis. The memory always gave Elvis a chuckle, Charlie said in a 2005 intervieww with Elvis Australia, the Official Elvis Presley Fan Club. Charlie, a Decatur native who died Friday at age 71, said he used the crate because he was 5 feet 3 inches tall and the other band members 'towered over me.' After meeting backstage at that performance, Charlie didn't see Elvis again until both were in the Army, where they became friends.

Elvis hired Charlie in 1960 as a member of his 'Memphis Mafia'. Charlie was the only professional musician and entertainer in that group. Charlie became a background vocalist and rhythm guitarist for Elvis, known as the man who gave Elvis his water and scarves. He worked with Elvis for 17 years. Not bad for a boy who started out plucking a ukulele on his front porch in Decatur and did comedy routines in school. Charlie was with Elvis when he first met his future wife, Priscilla, and was at Graceland when The King died in 1977.

After Elvis' death, Charlie performed at shows dedicated to Elvis, including a March 2005 appearance at Decatur's Princess Theatre Center for the Performing Arts. He also wrote 'Elvis 'N Me', which Castle Books published in 1988. Elvis' bodyguard, Sonny West, said in a DAILY interview that after Elvis' death, he and Charlie went 27 years without seeing each other. Then they met in Decatur at West's one-man show, 'Memories of Elvis'. 'He walked up, shook my hand, and said, 'It's been too long, Sonny. I'll tell you right now, if he (Elvis) was watching us, he'd want us to get together, because where he's at now, he's nothing but love', ' West recalled. Although Charlie lived at Graceland, he returned to Decatur to visit his parents' Jackson Street home. He told THE DAILY in 1982 that 'when you come back to Decatur, there are two things you have to have: Bob Gibson's barbecue and a C.F. Penn hamburger.' Now the entertainment industry has lost a man who worked to keep Elvis' memory alive.

Charle died of cancer at Fort Sanders Regional Medical Center in Knoxville. Fans are posting tributes to Charlie on Elvis Web sites. A Yahoo site had 81 messages as of Saturday night, including a message from one fan who wrote, 'May God bless your soul, Charlie. Now you're together again with your true friend Elvis'. That seems fitting, since in his book about Elvis, Charlie wrote, 'Remembering Elvis for the purpose of writing this book, has created loneliness in me like a torment'.

Letters of condolences may be sent to: