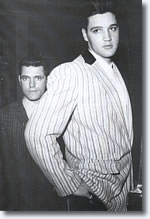 Charlie Hodge who passed away on March 3rd 2006, has been honored at the 2007 Rock 'n' Roll Hall of Fame Induction Ceremony in New York City. The Ceremony was broadcasted live on VH1 Classic.

Jennifer Hodge confirmed the news: "The ceremony opened with photos of those who passed on in 2006, who were important in Rock 'n' Roll History - which Charlie was part of. I have always been proud of Charlie, but to see him honored in this way was extra special to me. It was just a quick flash of his picture and his name, but it was a large gesture in mind."