Singer-Actor Jerry Reed dies at the age of 71

Jerry Reed died September 1st at the age of 71 from complications from emphysema. Jerry had been unwell for sometime. He leaves an unparalleled legacy of laughter and song.


Born in Atlanta, Georgia, on March 20, 1937, Jerry Reed Hubbard composed four songs recorded by Elvis. Though this is only a handful in comparison to other songwriters who wrote for Elvis, two of the tunes included 'Guitar Man' and 'U.S. Male'. These songs were recorded just prior to the surge of creativity generated by the television special Elvis. The songs represented a move away from the soundtrack recordings and toward better-quality material with a contemporary feel.

Jerry also played guitar for Elvis on 'Guitar Man'. Jerry Reed was one of several Southern musicians who had been influenced by Elvis and later ended up working with him. In 1967, Reed recorded 'Tupelo Mississippi Flash', an Elvis novelty record that was a comic tribute to his idol. Reed's career as a performer accelerated in the 1970s. He profited from his rowdy good-old-boy image when a vogue for things Southern hit Hollywood. He costarred with Burt Reynolds in four films, including the popular Smokey and the Bandit. 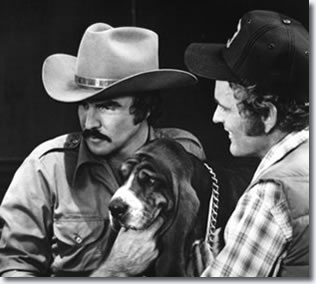 Above, view a video of East Bound And Down from Smokey and the Bandit.

Above - view a great video with Elvis Presleys Guitar Man audio recording from the 1980 sessions dubbed onto footage of his performance from the '68 Comeback Special.

Update from Elvis Australia member Maxine : I was fortunate to be at a concert where Jerry was appearing with Boots Randolph and Chet Atkins in a very small college town - Moorehead Kentucky. When Jerry came out he played and sang several songs - then he said 'this is a new one I just wrote and want to sing it for you tonight. Elvis is recording it tomorrow and nobody will listen to me sing again'.

Jerry Reed was voted Musician of the Year by the Country Music Association in 1970 and 1971. In 1970, he won a Grammy for 'Me and Jerry', his first duet album with Chet Atkins.

Musicians from all over the world would try to copy his incredible country finger-style of guitar playing, which often includes playing rhythm and lead simultaneously! 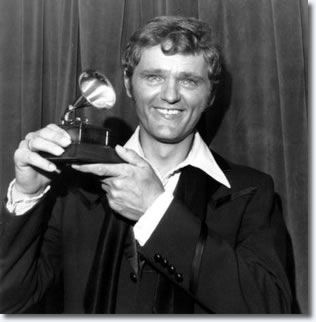 Jerry recorded three No. 1 country singles, wrote one of Elvis Presley's biggest hits and developed a fingerstyle guitar technique that other musicians are still analyzing to this day.

Jerry began playing guitar at age 9 and was just a teenager when he began performing in the Atlanta area on shows featuring Ernest Tubb, Faron Young and others. At age 17, Capitol Records producer Ken Nelson saw him perform and signed him to a recording contract. Although his early records were not successful, he also became a staff songwriter for Atlanta music publisher Bill Lowery. Reed's 'Crazy Legs' was recorded by rock pioneer Gene Vincent in 1958. Brenda Lee scored a Top 10 pop hit with Reed's 'That's All You Gotta Do'.

Following a two-year stint in the military, Reed moved to Nashville in 1962 and began work as a session musician while writing songs such as Porter Wagoner's 'Misery Loves Company', a No. 1 single in 1962. In 1964, he joined RCA Nashville's artist roster at the urging of label executive Chet Atkins, one of Reed's biggest supporters. In 1967, Reed landed his first single on Billboard's country chart. Although the track, 'Guitar Man', peaked at a dismal No. 53, the song got the attention of Elvis Presley, who recorded the song and wanted Reed to recreate the funky guitar riff he used on his original version.

In a 2005 interview, Jerry said he didn't recall being nervous when he showed up for Presley's 'Guitar Man' session in Nashville, September 1967.

'I'd have been nervous if I had to do something I didn't know how to do', Reed said. 'Elvis had heard my album cut, and he wanted it to sound like that. His producer was an old friend of mine from Atlanta, Felton Jarvis, who said, 'Well, you're gonna have to get Reed in here to play on it then. He's a fingerpicker, and these guys don't have any idea what he's doing because he does all this weird stuff anyway. He tunes them strings weird'.

So I got in there and I turned that E-string down and that B-string up and hit that intro. I wasn't worried about playing that'. At another session in January 1968, steel guitarist Pete Drake urged him to pitch another song to Presley.

'Pete and I knew each other in Atlanta, when I was working at a cotton mill and he was driving a Merita bread truck', Reed noted. 'He said, 'Have you got anything else?' I said, 'No, man. Listen, this is enough for me, believe me'. Then Elvis said, 'Yeah, have you got any other songs?' I said, 'Well ... uh ... yeah'.

Reed's recording career began to pick up in 1967 and 1968 with the singles, 'Tupelo Mississippi Flash' (inspired by Presley) and 'Remembering'. His popularity increased substantially in 1970 with 'Amos Moses', a crossover hit that reached No. 8 on Billboard's pop singles chart. The same year, he gained national TV exposure when he became a regular on the Glen Campbell Goodtime Hour.

During the '70s, Reed co-starred in a series of movies with Reynolds -- WW and the Dixie Dancekings (1975), Gator (1976) and Smokey and the Bandit (1977), the latter which produced a No. 2 single with the theme, 'East Bound and Down'. He reprised his role as Cledus 'Snowman' Snow to work with Reynolds in other Smokey and the Bandit films that were released in 1980 and 1983. His additional acting credits include High Ballin' (with Peter Fonda) and Hot Stuff (with Dom DeLuise). More recently, he starred as Red Beaulieu, a sadistic college football coach, in the Adam Sandler hit, The Waterboy.

Reed's success as a recording artist and film star overshadowed his contributions as a songwriter and musician. He wrote more than 300 songs, including 'A Thing Called Love', a No. 2 hit for Johnny Cash. As a session guitarist, he recorded with Waylon Jennings, Bobby Bare, Ian & Sylvia, Joan Baez and Ringo Starr, among others. He also recorded two albums of guitar duets with Chet Atkins. The first one, Me and Jerry, resulted in a Grammy in 1970 for best country instrumental performance. They won another Grammy together in 1992 in the same category for 'Sneakin' Around'. Reed also won a Grammy in 1971 for best male country vocal performance for 'When You're Hot, You're Hot', one of several hits that begin with one of his guitar riffs.

During the interview, Reed discussed how he arrived at his guitar style that is probably best described in the title of his instrumental, 'The Claw'. The technique began evolving when he was playing at dances in Atlanta.

'Every show, Ray would do Ray Charles' 'Hallelujah, I Love Her So', he said. 'I loved the piano intro on that. It had the counterpoint -- the bass line going up and had the melody on top. I said, 'Man, I want to do that'. And that's what got me started was all that counterpoint stuff that I did. ... I loved R&B and rock 'n' roll and country and gospel. And in Atlanta, when you played dances, you had to play it all'.

'It just evolved into the way I played my guitar'.

Reed's last major label project was Old Dogs, a collection of Shel Silverstein songs performed with Jennings, Bare and Mel Tillis, which Atlantic Records released in 1998. At the time he released a concert album in 2005, he said he was writing a series of instrumentals he hoped to have recorded by other guitarists.

Considering his accomplishments in film and music, Reed said he had a one-word job description.

'Entertainer', he said. 'I think that covers me pretty well'.

We have been asked where to buy Jerry Reed's 'Tupelo Mississippi Flash' - the song along with 'Guitar man' and "U.S. Male is available on the following CD.

This CD would be a well-chosen intro to Jerry Reed, a highly enjoyable artist. Contains (the utterly delightful 'Tupelo Mississippi Flash' and 'Amos Moses', along with 'Guitar Man' and 'U.S. Male' and the hit, 'East Bound And Down'. There are instrumentals ('Navy Blues', 'Nervous Breakdown'), sad songs full of self-mockery ('The Likes of Me'), down-home tunes ('Are You From Dixie', 'She Got the Gold Mine'), even cynical social commentary ('Lord, Mr. Ford'). If you're unfamiliar with Reed, this is a great stepping stone to curing the shortfall.