By David Troedson
Source: Elvis Australia
March 1, 2019
Elvis Presley is the undisputed King of Rock and Roll. In 1954, Elvis Presley kicked off a musical revolution by modernizing traditional genres such as blues, country and bluegrass. Throw in a charismatic stage presence with then-scandalous hip-swings and body contortions, and it's easy to see why he set the charts (and hearts) ablaze.

It's difficult to overstate Elvis Presley's influence on music and culture. His presence, golden voice and raucous rockabilly caused a rock & roll domino effect. Buddy Holly moved away from country after seeing Elvis Presley in concert, for example, and his appearances on The Ed Sullivan Show induced audience pandemonium and established him as a musical rebel. Elvis also yielded a strong influence on youth culture.

In arguably one of his greatest, and certainly one of his least recognized or remarked upon contributions to popular music, Elvis created the classic and enduring template of the rock 'n' roll band.

In 1955 faced with the combination of wants, needs and must, the young king agreed to the permanent addition of a drummer, to his Blue Moon Boys. Intentionally or not, in that one moment Elvis gave the world its first classic rock 'n' roll line-up, consisting of just guitar, bass, drums and vocal. Thousands of bands would follow and be inspired by the template, but it was Elvis Presley, Scotty Moore, Bill Black and DJ Fontana who were the first. 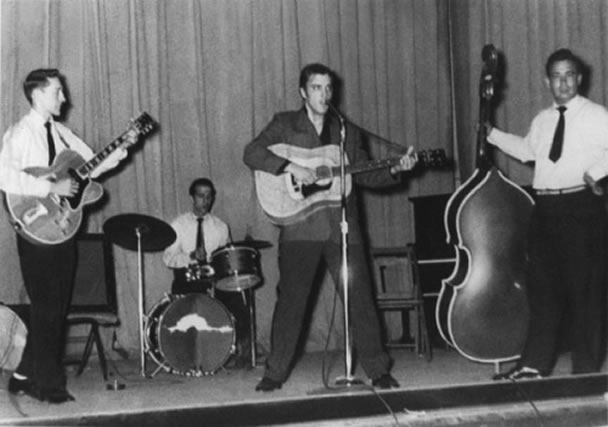 The rockabilly lineup that musicians first emulated after seeing Elvis on stage in 1955 involved:

After D.J. Fontana became a permanent member of the group in August 1955, and about a month where he missed touring because of an ailment, the quartet appeared nationally on CBS-TV's 'Stage Show', for six Saturday evenings between January 28 and March 24, 1956. These TV appearances served to popularize this four-man set-up, and was adopted by many of the same musicians who were captivated by Elvis in 1955:

'Before Elvis, there was nothing'. 'Nothing really affected me until I heard Elvis. If there hadn't been an Elvis, there wouldn't have been the Beatles'. (John Lennon)

'A lot of people have accused Elvis of stealing the black man's music, when in fact, almost every black solo entertainer copied his stage mannerisms from Elvis'. (Jackie Wilson)

'Elvis is the greatest cultural force in the twentieth century. He introduced the beat to everything, music, language, clothes, it's a whole new social revolution – the '60s comes from it'. (Leonard Bernstein)

'When I first heard Elvis' voice, I just knew that I wasn't going to work for anybody; and nobody was going to be my boss… Hearing him for the first time was like busting out of jail'. (Bob Dylan)

'I don't think there is a musician today that hasn't been affected by Elvis' music. His definitive years (1954-57) can only be described as rock's cornerstone. He was the original cool'. (Brian Setzer)

'He's just the greatest entertainer that ever lived. And I think it's because he had such presence. When Elvis walked into a room, Elvis Presley was in the f***ing room. I don't give a f*** who was in the room with him, Bogart, Marilyn Monroe'. (Eddie Murphy)

'I was a fan when I first heard Elvis Presley when I was 14 and found out about this new rock and roll music in America. (Glenn Shorrock)

'When I first heard Elvis, it sounded like an alien art form. But the more I looked into it, the more I realised something. That the hillbilly and bluegrass music, country music in general along with gospel, rhythm & blues, it all went together and came back in the form of Elvis Presley'. (Cliff Richard)

To hear Heartbreak Hotel I had to go into a record shop in Liverpool and listen to it through headphones in one of those booths. It was a magical moment, the beginning of an era. (Paul McCartney)

I remember so well the day my mother came home with a 78 of 'Heartbreak Hotel'. She said she'd just heard it in the record shop and she knew she had to buy it straight away. So she put it on for us both to listen to and I'd never heard anything like that before in my whole life. (Elton John)

Benny Andersson (ABBA) It was hearing an Elvis Presley song that sparked his passion for the piano when he was young. His decision to take up piano, at age 11 in his native Sweden, specifically after hearing "Treat me nice", the B side of the "Jailhouse Rock" single. (As noted by Tom Power of CBCRadio on December 10, 2017).