Essential Elvis? Here it is! - Elvis at 21: New York to Memphis 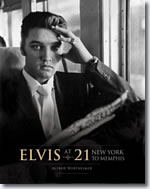 Elvis at 21: New York to Memphis isn't a CD but a book of candid photos of Presley on the cusp of fame in 1956.

The latest album in RCA's endless Elvis Presley's CD reissue series may have 'Essential' in the title, but don't believe it. RCA has called nearly a dozen earlier albums or boxed sets 'essential', and few have lived up to the claim.

However, there is one Presley-related item that deserves that description: 'Elvis at 21: New York to Memphis', a book of exquisite Presley photos taken in 1956 by Alfred Wertheimer.

These are remarkably intimate and revealing portraits, mostly shot 'fly-on-the-wall' fashion as Wertheimer followed Presley in the recording studio, on a train ride, to a coffee shop lunch counter and at home in Memphis, Tenn., with his parents and friends.

Presley fans have marveled for years at some of the photos, more than 100 of which were featured in 'Elvis '56', a large-format paperback published in 1979 by Collier Books.

Now, Insight Editions not only adds some 200 more photos from the period to the mix, but also displays them in a gorgeous 11-by-14-inch hardback edition.

One thing that makes the black-and-white photos so striking is that we rarely saw Presley in such candid fashion after 1956 because the singer's manager, Col. Tom Parker, valued mystique in his marketing. He not only kept Elvis away from photographers, but also from most journalists.

Other photographers got access to Presley in 1956, but usually in formal sessions where things seemed posed. The wonder of Wertheimer's work is that virtually every shot of Presley seemed as informal as a home movie, whether the 21-year-old was reading a Betty and Veronica comic book, combing his hair in front of a mirror or French-kissing (!) his date backstage.

Adding to the lure of the photos is that Presley was still in the infancy of fame, and Wertheimer's photos captured his fascinating blend of innocence and raw charisma. In its way, it's as compelling a portrait of a rock immortal as Don't Look Back, D. A. Pennebaker's 1967 film documentary of Bob Dylan on tour in England.

The back story: Wertheimer, a young New York freelance photographer, was excited to get a call from an RCA Records publicist asking if he could shoot Presley's performance on Tommy and Jimmy Dorsey's weekly TV show in March 1956. The reason for Wertheimer's excitement: Tommy Dorsey was one of his heroes.

Like most Americans, he had never heard of the young rock 'n' roll singer whose first RCA recording, Heartbreak Hotel, was just climbing the charts.

'Elvis was the perfect subject', Wertheimer told me when 'Elvis '56' was published. 'He was never temperamental or shied away from the camera.

'Elvis was in total control when he stepped onstage, but offstage in those days he was just like anybody else. He knew something was happening, but he was still shy and unassuming. He was just starting to gain a sense of his own stardom'.

In that spirit, Presley let Wertheimer follow him back to his hotel after rehearsal and photograph him while he read fan mail and got ready for the evening's performance.

Through it all, Wertheimer was apparently so unobtrusive that Presley never seemed self-conscious. The photos, including ones of the actual TV show performance, are splendid.

Several months later, Wertheimer got even more access to Presley during an appearance on Steve Allen's TV show, shooting Elvis sitting alone at the piano in a rehearsal room and going over his lines with Allen and fellow guests Imogene Coca and Andy Griffith.

Things got even better as Wertheimer followed Presley to Richmond, Va., for a concert and some downtime. Backstage, Wertheimer somehow managed to snap lots of shots of Presley and his date snuggling, without breaking the mood.

In Memphis, Wertheimer joined Presley on a motorcycle ride, stepped into the pool with him while the singer horsed around with some friends, and then captured the awestruck expressions of Memphis fans watching their hero onstage. Every page is a gem.

Further study: If you really want the essential Presley records, you're going to have to get at least two albums, probably three. The new, two-disc The Essential Elvis Presley can't be considered definitive if it omits such basic tracks as One Night, How Great Thou Art and Blue Moon of Kentucky.

For the budget-minded collector, start with Elvis at Sun, a 19-song CD on RCA that includes the landmark material Presley recorded at Sun Records before Heartbreak Hotel. Then pick up Elvis: 30 No. 1 Hits, another single-disc album on RCA that will take you from Heartbreak Hotel to Way Down. If you are willing to go some additional cost, add Elvis Ultimate Gospel on RCA to hear Presley singing the music that was probably closest to his heart.

The serious collector should get three boxed sets on RCA. They'll give you more than you need, but you'll have virtually everything you want, including some concert recordings. Each set contains five discs and focuses on a single decade: Elvis - The King of Rock 'n' Roll: The Complete '50s Masters, Elvis - From Nashville to Memphis: The Essential '60s Masters I and Elvis - Walk a Mile in My Shoes: The Essential '70s Masters.

For the movie tunes, which take you into an uneven chapter in the singer's career, you'll need the two-disc Elvis - Command Performances: The Essential '60s Masters II.