Despite performing more than 1,000 shows between 1969-1977, there are several concerts which stand out among Elvis fans for one reason or another. One of those concerts was a one-time only performance in Boston during the fall of 1971. For many years, this historic and rare concert made the rounds on the import release circuit in varying degrees of sound quality. But thanks to the good folks at the 'Follow That Dream' (FTD) Collector's Label, Elvis fans can now enjoy the ultimate release of this fine performance.

Boston Garden '71 documents Elvis' performance in Boston, Massachusetts on November 10, 1971. Sadly, this concert would be the one and only time Elvis would perform for his fans in the city affectionately nicknamed 'Beantown', but fortunately for the fans in attendance that evening and for the listeners of Boston Garden '71, what this CD documents is truly a once-in-a-lifetime event. Throughout much of 1971, Elvis had performed for his fans in both Las Vegas and Lake Tahoe. Although this tour would be Elvis' last of the year, it was oddly enough the first and only tour of 1971 that took 'The Elvis Presley Show' outside the state of Nevada! A total of 14 shows were performed over a 12-day stretch that took 'The King' across the eastern and mid-sections of the U.S. and were by all accounts a huge success. Now thanks to the Boston Garden '71 release by FTD, fans can get a glimpse of what this short but exciting tour was like. 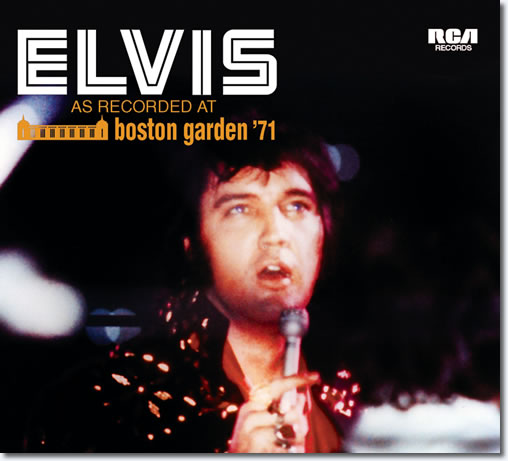 Perhaps the first thing that fans notice upon hearing Boston Garden '71 is that this is an entertainer who is still clearly in love with being on stage, performing for his fans. Unlike many of Elvis' shows during the mid-to-late 70's, these early concerts show an artist that still has a passion for making quality music and it shows throughout each and every song captured on Boston Garden '71. From the opening strains of the still fairly new show opener 'Also Sprach Zarathustra (Theme To 2001: A Space Odyssey)', listeners can clearly feel the electricity generated by both the fans and Elvis' band. Once Elvis rips into the opening lines of 'That's All Right', the listener simply had better hang on and enjoy the ride. Perhaps it's the excitement of being outside the confines of Las Vegas and Lake Tahoe, or perhaps it's simply the pleasure that Elvis still had for live performing, but in either case, Elvis' literal attack of the opening number proves that this would be a show like no other. Moving from 'That's All Right' into 'I Got A Woman'/'Amen', Elvis carefully crafts each song like it's the first time he has performed it. Without the long, drawn out ending that would plague later versions of the song, Elvis moves effortlessly from the Ray Charles classic 'I Got A Woman' to his more modern interpretation of Creedence Clearwater Revival's 'Proud Mary'. With just these first 3 songs, most Elvis fans will feel that they have gotten their money's worth out of Boston Garden '71. But thankfully, the excitement doesn't end there...

Outstanding versions of 'You've Lost That Lovin' Feeling' and 'Polk Salad Annie' are offered up to the fans before Elvis moves into his own classics like 'Love Me', 'Blue Suede Shoes' and 'Hound Dog' which are all performed with enthusiasm and energy. Sadly, one of the few drawbacks to Boston Garden '71 is an incomplete version of 'How Great Thou Art' which, judging by what we are able to hear, would have been a knock-out performance. As the show begins to draw towards its inevitable conclusion, fans are treated to wonderful readings of 'I'm Leavin', 'Bridge Over Troubled Water' (with reprise) and a well-paced version of 'Funny How Time Slips Away'. Unfortunately, the time has come and Elvis closes the show with a fine performance of 'Can't Help Falling In Love'. Considering Boston Garden '71 is taken from an early 70's soundboard cassette source, the sound quality throughout the show is surprisingly good. Elvis' vocal can be heard well throughout the show, although at times feedback is noted...whether this is due to the source tape or the actual concert equipment is not exactly known. It's also interesting to note that Elvis and the band are not on 'auto-pilot' as is often the case during later 70's shows. Several times during the show, the band and Elvis are not exactly in sync, which provides for a unique listening experience in my opinion. This tour also marked the first appearance of J.D. Sumner & The Stamps Quartet as Elvis' male backing vocalists, replacing The Imperials and listeners will notice at different points throughout the show that the harmonies of Elvis & The Stamps aren't exactly on point. Again, this new pairing between Elvis and his new backup vocalists creates a unique feeling for the show.

The one criticism that I have of Boston Garden '71 comes in terms of the packaging for the CD. While I give kudos to FTD for modeling the graphics for this package after Elvis' historic 'Elvis As Recorded Live At Madison Square Garden' album, the lack of quality photographs from the show is truly a drawback. While certainly this is not the fault of FTD, the dark and sometimes blurry photos used throughout the Boston Garden '71 packaging provides a dismal look to the overall product. The pictures of Elvis looking healthy and fantastic in his 'Black Pinwheel' jumpsuit from the show are set against a black background, which in my opinion creates a dreary looking CD digipak. Perhaps the most questionable decision has to be the profile picture of Elvis used under the CD tray, which is so dark, it's almost impossible to see him! Accompanying the Boston Garden '71 CD is a 8-page booklet which would have been a nice touch had there been better pictures available from the show to use. Instead, the booklet contains more out-of-focus and dark pictures from the show which, although historical, really don't provide much to the overall attractiveness of the packaging. On a positive note, the booklet does contain a nicely written essay by Cathi Avenell, providing her thoughts and perspective of the show.