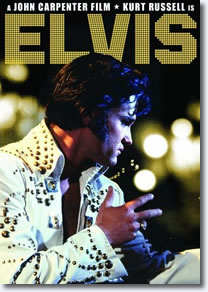 In 1962, in a scene in Elvis Presley's 12th movie, 'It Happened at the World's Fair', child actor Kurt Russell was required to kick the famous rock-and-roll singer in the shin. 'Elvis put a pad on and Kurt missed the pad and really kicked him, and it hurt', recalled longtime Elvis friend and actor Red West. 'I can still see it now. I was sitting right there, watching it'.

What goes around comes around. Seventeen years later, Russell would be asked to feel Presley's pain -- on a much deeper level -- when he starred in the first Presley biopic, 'Elvis', a sympathetic ABC made-for-TV movie that became one of the highest-rated films ever when it aired on Feb. 11, 1979, less than 18 months after the singer's shocking death at the age of 42.

The film propelled former Disney lead Russell ('The Computer Wore Tennis Shoes') to adult stardom and affirmed John Carpenter -- fresh from the surprise critical and box-office triumph of 'Halloween' (1978) -- as one of America's more talented young directors. Carpenter and Russell would collaborate on four other films, including the cult classics 'Escape from New York' (1981) and 'The Thing' (1982).

Long-sought by fans, 'Elvis' made its overdue DVD debut Tuesday, on the Shout! Factory label. The disc offers the full 148-minute 'theatrical' version that played in cinemas overseas, and includes a commentary track from Ronnie McDowell, who supplied Russell's 'Elvis' singing voice, and author Edie Hand, a Presley cousin.

Bonus features on the DVD include a vintage behind-the-scenes promo film, and a clip from an 'American Bandstand' episode devoted to Presley in which host Dick Clark -- whose company produced the 'Elvis' TV movie -- comments: 'He was one of twins, his brother did not survive. And can you imagine if there had been two men who looked like Elvis Presley walking the face of the Earth?' The comment is intriguing, because a theme running throughout 'Elvis' -- scripted by Anthony Lawrence, who wrote three of Elvis' 1960s musicals -- is that Presley felt incomplete and perhaps guilty due to the loss of his stillborn identical twin, Jesse Garon Presley.

In the film, the adult Elvis addresses his shadow as Jesse ('I still feel like there's something missing', he says, as thunder rumbles); and as a boy in Tupelo, he's taunted as 'crazy ol' Elvis' for talking to his late brother. 'I don't wanna be just half a person', he laments to his mother, Gladys (Shelley Winters). This adds a somewhat spooky element to 'Elvis' that connects it to Carpenter's other films, including 'Halloween', in which the Jamie Lee Curtis character is essentially incomplete until insane killer Michael Myers enters her life.

'I'm a stickler for the truth, and there were a couple of big things in that movie that were terrible', said Lacker, who is listed as an 'additional consultant' at the end of 'Elvis' -- a credit he says he doesn't want and didn't deserve. ('Even back then, we were tired of people using our stories', he said.)

'Number one, Elvis didn't sit and talk to his stillborn twin -- they got that crap from Geller (Larry Geller, Elvis' hairstylist), because he's into what I call California cult crap', said Lacker, who still lives in Memphis. 'And Kurt Russell, who's a good actor, they had him portray Elvis as the saddest person in the world, and he wasn't. Our nickname for him was 'Crazy', for his crazy sense of humor'. Some other Elvis associates are more supportive of the movie. Geller -- who says he was blessed to be spiritual mentor and hairdresser to 'the most important and significant star in the history of the entertainment world' -- said 'Elvis' is 'flawed, but at the top of the list' of films about Presley, thanks to Russell's 'terrific' performance. (Geller says he wrote the scene in which Elvis reads to Priscilla from 'The Prophet' by Khalil Gibran -- a book Geller says he introduced to Presley.)

'This was still pretty fresh after Elvis' death, so I was very sensitive to the production itself', said the Southern California-based Geller, 70, who is credited as a 'Technical Advisor' on the film. Unlike other Elvis cronies, Geller and the late Charlie Hodge -- another 'Technical Advisor' -- portray themselves in the film.

Said Geller: 'One of my first questions was, 'Who is going to portray Elvis in this movie?' And when they said Kurt Russell, I almost backed off -- he wasn't really known then. He came up to my house, we met, and I liked him right off the bat. So he said, 'Would you do my hair?' Kurt's hair was very similar to Elvis.'

Red West, 73, said Dick Clark asked him to be a technical consultant on the film, but the publishers of his book -- 'Elvis: What Happened', which provided much of the source material for 'Elvis' -- advised him against it because it would be 'a conflict of interest'.

Nevertheless, 'I thought the movie was the best thing that ever was done about Elvis', he said. 'I was there, I know how he was. This is the closest thing that's ever been made to the way it was'.

Ambitious by television standards if modestly budgeted (a house in Long Beach, Calif., was used as a stand-in for Graceland, and an occasional palm tree can be spied on the streets of 'Memphis'), 'Elvis' arrived at a time when the stations of the singer's cross -- from Tupelo to Crown Electric to Sun to Hollywood to the Army to Vegas to death -- weren't as familiar as they are today. 'Who do you sound like', Sun secretary Marion Keisker (Ellen Travolta) asks the pre-fame Elvis. 'I don't sound like nobody', he replies.

Whatever their opinions of 'Elvis', Elvis associates agree the definitive Presley movie has yet to be made -- and that the project should be a big-screen theatrical release. 'Elvis is too big for television', Geller said.