Dixieland Rocks is the second soundboard-release on the Follow That Dream label, and it is a very fine one indeed. Elvis started this first tour of 1975 a little frightened because of the many press reports about his weight problems, but he must have lost all his worries during this tour. Murfreesboro was only scheduled for one show, but instead he gave 3 sold out performances. Elvis starts very energetic with See See Rider and I Got A Woman. Love Me gets the usual treatment, and it seems Elvis does have a lot of fun. If You Love Me and You Don't have to Say You Love Me are solid performances.  All Shook Up and the Teddy Bear/Don't Be Cruel medley could have been done sleeping, while The Wonder Of You just isn't the wellknown 1970 version, although well performed. Polk Salad Annie really rocks displaying both Jerry Scheff's and James Burton's skills in the instrumental parts. Time for some chat with the audience and the band introductions, followed by a beautifull My Boy. Elvis really gets into this song.! T.R.O.U.B.L.E. is a rocking version and I'll Remember You is also a beautiful performance. Elvis is trying to make J.D. Sumner laugh while singing in deep voice. Let Me Be There and An American Trilogy are brought inspired, while Fairytale seems a little bit too slow, although Elvis keep on asking 'one more time' for the last verse, taking the song over 5 minutes! Little Darlin' s a fun song, and the show ends with Funny How Time Slips Away and Can't help Falling In Love. Bridge Over Troubled Water does have Elvis' attention and is a strong version, while Love Me Tender is used by Elvis to interact with the audience. The disc displays an overall inspired Elvis who's having lots of fun on stage and really delivers. The voice is strong and the band tight. Great show and a very fine release from the FTD-team.

Don't expect a perfectly balanced disc just because it comes from the BMG-vaults; this is just another soundboard recording, nothing more or less although it is a very good one. Just don't expect a multi-track recording like Recorded Live On Stage In Memphis or the Madison Square Garden shows, and be glad with this one, for you can not change the way it was recorded in 1975. There ain't too many Polk Salad Annie's from the 1975 tours, and I believe that the FTD gives a lot of attention to the material chosen to be released. 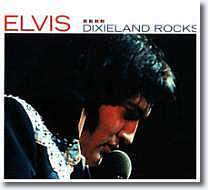 Dixieland Rocks is out and will blow you away!

The sound is awesome with crisp, clear vocals and Elvis is in fine form, both vocally and in his interplay with the band and the very receptive audience.

At this stage of his career (1975) some of his concerts were rushed and lacked a little polish, but not his concerts in Murfeesboro, Tennessee on May 6 and 7.

Every one of the 24 selections on this release is strong. From the high energy of I Got A Woman (J.D Sumner's low note has to be heard to be believed) to a rumbling version of Polk Salad Annie, the listener is treated to a great concert from the King. An unusual version of the often forgotten 1970s single, T.R.O.U.B.L.E. grabs your attention and features some great interplay between Elvis and his backing ensemble - on Why Me, Lord?, poor old J.D. Sumner doesn't stand a chance given the playful mood Elvis is in. The excellent sound quality of the CD is never more apparent than on Johnny B. Goode/Long Live Rock and Roll. A 'creeping crud' rendition of Fairytale is engaging while Why Me Lord? is done in a very low, humorous way. On Let Me Be There Elvis is obviously totally engaged in the song and there are well paced versions of I'll Remember You, Little Darling (with that 1950s feel), and Funny How Time Slips Away. A nice slip up on The Wonder Of You adds to the telling of the song. Even a slightly fast paced Can't Help Falling In Love doesn't distract nor a too highly pitched offering of one of Elvis' forgotten gems from the 1970s, My Boy. Bridge Over Troubled Water is one of Elvis' better versions of the song and a stirring (as usual) version of American Trilogy leaves one wanting more. As usual the concert offers a good balance between up-tempo rockers and reflective ballads. In the former category there are great versions of All Shook Up and Don't Be Cruel. On You Don't Have To Say You Love Me, Love Me and Love Me Tender Elvis' singing will please all female fans.

One question though. Why does the release finish with two tracks following the usual Elvis close, Can't Help Falling In Love? Bridge Over Troubled Water and Love Me Tender would have fitted nicely into the concert at an earlier stage. All I can think of is that perhaps the producers, Ernst Jorgensen and Roger Semon, wanted to appear to be giving added value to the release by finishing the concert unconventionally. Dixieland Rocks showcases Elvis in very good spirits and particularly strong voice. The high energy level of the concert is readily obvious and there are some pleasing audience reaction moments caught on the audio.

The digipack format features a colourful profile shot of Elvis while the back cover is an unremarkable blue/white mid shot we've all seen before. If Ernst and Roger continue to produce quality product like Dixieland Rocks, the success of the Follow That Dream collectors label will be assured for a long time to come.

Verdict: Is Dixieland Rocks the best ever soundboard release? If it isn't, it comes close and it certainly is a stand-out concert for a 1975 Elvis performance. It is a release you will want to play time and time again.