'Elvis: King of Entertainment' DVD is one of the most comprehensive documentaries of the King's history. It starts during the war years and documents the influence the local charismatic churches had on his life. A great deal of the video coverage is a first for Elvis fans. The account then continues on through his meteoric climb to fame, shows TV footage not seen before and continues on through his movie career to his return as a live entertainer enchanting the world.

A truly worthwhile account for all you Elvis fans out there this DVD presents an overview of the highlights of Elvis Presley's life, his career, his performances, and his movies, interspersed with television performances and interviews, it is a testament to the phenomena that Elvis is and was. Seeing footage of his army induction, his wedding, and early as well as Las Vegas performances are an interesting draw.

If your looking for a reasonably priced, and entertaining overview of Elvis Presley's life and career, then 'Elvis: King of Entertainment' DVD is something you should buy.

I was surprised at some of the rare footage that I had not seen before, such as Elvis on the Milton Berle show aboard the USS Hancock, and Uncle Milty playing his twin brother, Melvin.

The picture quality of the documentary and sound is top notch as well.

I was surprised at the many performances and interviews that you will see throughout this documentary.

Pick this one up ladies and gentlemen, it is well worth the price! TCB. 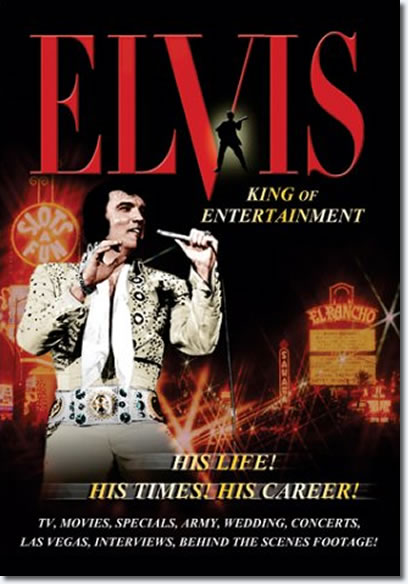