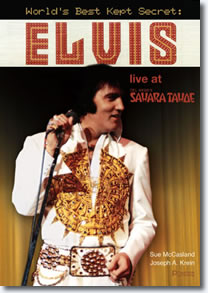 'I know you will enjoy the memories this wonderful book brings back, as well as the secrets it reveals'.

So notes Ed Bonja in his reflective forward to Sue McCasland and Joseph A. Krein's excellent testimony to the Elvis - Tahoe experience.

Thoroughly researched, this book takes us to Tahoe in the 1970's. From the obligatory billboard photos to original architectural drawings of the intimate High Sierra Showroom where Elvis played some 5 engagements between 1971 - 1976, this book is captivating in its capacity to take you to a different time and a different place. If you are like me and want to get a sense of what the environment was like at the time that Elvis played - this book is a must. So to be clear, the book is as much about Lake Tahoe and the High Sierra Showroom as it is about Elvis. Wonderful artefacts (the venue advertisement for the likes of Liberace and Johnny Cash, Diana Ross and the Carpenters) bring to life the history of the hotel and Lake Tahoe more generally.

At the same time, the authors provide first hand experiences of shows (shooting Elvis with a water pistol and handing him one) combined with great tales from the likes of Sonny West (taking Clint Eastwood backstage and having fun with Sammy Davis Jr), Ed Bonja (eating and gambling with The Colonel) as well as fans ('… I went up to the floor that Elvis was staying on… We had been there before'). We are reminded of Elvis' impact of an audience (a billboard review from 1971) and his generosity ('Elvis will donate his cheque from this special [3am] concert to the Barton Memorial Hospital…').

Great lengths have gone to produce a publication of the highest quality and detail. You will appreciate for instance the photos of Elvis in 'The Peacock' with amazing close ups of the Peacock's head in the background. The author's aim - to take you as close as possible to the scene. This is clever - because for reasons which are explained (and which serve as the point of the book) there are precious few photos of Elvis in Tahoe, and of those that exist the quality isn't great. Indeed, many of the shots of Elvis here are out of focus and poorly lit. But to be critical here would be to miss the point. In fact, there is a realism about the often blurred shots that gives this book the authenticity it seeks and thoroughly deserves.

I cannot praise this publication more highly. It sits proudly next to 'Elvis - The Concert Years 1969 - 1977', and I recommend it to any fan of Elvis in the 70's who wants to be taken to a time and place which up until now has not been well documented. As McCasland notes 'With Elvis' passing more than a year after his last Tahoe performance, I didn't realise, at the time, that Tahoe would become a little known tour destination in Elvis' career'. Thanks to Sue and Joseph you can now share in the 'Best Kept Secret'!

You can now View a photo preview on Elvis Live at Del Webb's Sahara Tahoe book, including text, photos and Flash presentation.