Memphis Recording Service (MRS) recently released 'Such A Night In Pearl Harbor' as a limited edition 1000 copies only double vinyl LP Record for 'Record Store Day' 2016. At the same they also released 'The Complete Louisiana Hayride Archives 1954-1956' double LP and 'Live In The 50's - The Complete Tour Recordings' double LP, both also limited to 1000 copies.

Elvis' 1961 USS Arizona Memorial Fund concert was previously released as a deluxe bootleg LP in the late 1970s, and later, officially released for the first time by RCA as part of the 'Elvis Aron Presley' silver box set. The bootleg LP had more appeal because of the great gatefold packaging, the RCA release had just slightly better sound quality, but both were actually quite poor sound quality.

Now with this release by Memphis Recording Service we have the best - better - sound quality of both previous releases on VINYL, and with an unbeatable presentation with the 24-page gatefold with many photos of Elvis before and during the concert. So the best of both 'worlds'.

The deluxe 24 page gatefold presentation, and a improved sound quality over even the RCA release, make the concert a more enjoyable listening experience. Although the sound quality of this 1961 benefit concert for the USS Arizona Memorial by Elvis still has a lot to be desired, this is undoubtedly one of Elvis' best concerts of all time.

View our 'unboxing' video of the Louisiana Hayride Record set (03:51)

Backed by some of the best musicians of their day, (Boots Randolph, Floyd Cramer on piano, Hank Garland on guitar, Bob Moore on double-bass as well as Elvis' usual band Scotty Moore & D.J. Fontana and The Jordanaires) Elvis' obvious enjoyment is apparent as he is once again on stage, performing just his 3rd concert since 1957.

This concert displays Elvis' ability to tackle all styles of music (rock, blues, country, and pop)and perform them truly without equal. Elvis performs a number of his 1950's hits and his early 1960's post army songs with equal zeal. If an alien landed on this planet and wanted to know why Elvis was called 'The King of Rock and Roll?' this would be record to play. 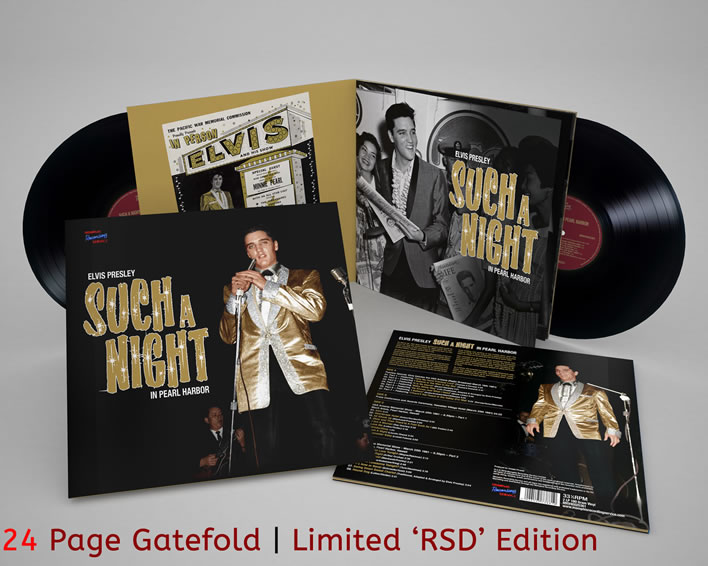 Such A Night In Pearl Harbor 2 LP Vinyl Record for 'Record Store Day' 2016.

As mentioned already, the sound quality is a major improvement but it has to be said that it is still far from being anything near professional sound quality, but there is far more fidelity here than on either of the two prior LP issues, with better bass, and the recording is much clearer. The sound engineers at Memphis Recording Service have really done a great job enhancing the original tape, making this highly listenable now, and quite enjoyable. How many remember the bad audio interruption towards the end of 'A Fool Such As I' on the Silver-Box release? ; well now there is no such interruption!

When it is said of Elvis' return to the stage in Las Vegas in 1969 was his 'first live performance in 8 years', this concert is the one referenced - and as a 'last' concert for so long - fittingly it was a powerhouse performance, exciting for what it was, but disappointing in that the 1960s were not full of, and known for such performances instead of just movies. It's hard to believe that RCA would not have properly recorded such an amazing event by such an amazing artist, but that is a whole other subject!

Highly recommended to all Elvis fans both for the music and the historical significance of this benefit concert, unless you will not tolerate less than perfect, the experience is there to be enjoyed - and in my opinion more so on vinyl.

Order now if you would like one of these great releases.

Such A Night In Pearl Harbor 2 LP Vinyl Record

On March 25, 1961 Elvis Presley performed what would become his final live performance for eight years! The complete recording of that very show is captured here on this limited edition, 180gm, double album set. Also included in the 26 tracks is a vinyl debut of the recently discovered press conference for the show which was not available at the time of the CD version of this release. As a bonus, the included 24 page booklet is illustrated with many rare large images and extensive, informative linear notes that recall historical facts up to and including Elvis' arrival and performance in Pearl Harbor.

Order now if you would like one of these great releases.