Review | 'Glen Campbell Sings For The King' CD. Back in 1964, Elvis Presley was busy making movies, three that year including Kissin' Cousins, Viva Las Vegas, and Roustabout. That said, Presley was recording and releasing singles, including 'Viva Las Vegas', 'Kiss Me Quick', and 'Ain't That Lovin' You Baby' to modest sales. He was looking for a hit.

At that time Glen Campbell was best-known for his work as a studio musician as part of the Wrecking Crew, who played on a slew of hits. He met Presley during the taping of the Viva Las Vegas soundtrack. Campbell was enlisted to record demos just for Elvis because Campbell could sing in the same key and replicate Presley's distinctive style. The items on this disc were intended only for Elvis to hear. They were forgotten until recently when executive producer Stephen Auerbach found the reel-to-reel tapes in his father-in-law Ben Weisman's storage unit. This material has never been released to the public on any format, until now. 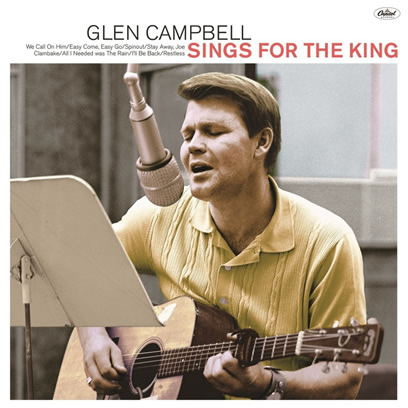 Glen Campbell Sings for the King includes 18 cuts of the Rhinestone Cowboy performing for Elvis from 1964-1968. Presley went on to record 12 of the these tracks, including 'All I Needed Was the Rain', 'How Can You Lose What You Never Had', and 'Cross My Heart and Hope to Die'. Campbell is in fine form. He frequently lowers his voice to give it a Presley-like growl, especially at the beginning of verses. This gives songs like 'Love on the Rocks' and 'I'll Be Back' a welcome bluesy vibe, unlike Campbell's own smoother countrypolitan style from the period (for example, his 1967 hits 'Gentle on My Mind' and 'By the Time I Get to Phoenix').

The new release also includes a made in the studio duet of Campbell and Presley on the gospel hymn 'We Call on Him' to show their vocal similarities. Presley's voice has a deep, spiritual resonance. Campbell intonations match Elvis'. The cut doesn't have them harmonize, but it is clear the two could easily sing as one in a complementary way. The artificial confection reveals more than just their resemblances. It reveals their individual talents as well.

Songwriters Ben Weisman and Sid Wayne penned most of the other tracks. The material has its charms, and the disc would stand up as a 'lost' Campbell album without the Presley connection. Even the more trite songs like 'Do the Clam', a dance number with a chorus of 'Do the clam, do the clam / Grab your barefoot baby by the hand / Turn and tease, hug and squeeze / Dig right in and do the clam' have a goofy appeal (and yes, Elvis did cover that one).

On the more serious songs, such as 'Restless' which begins with a solo piano introduction of Claude Debussy's 'Claire de Lune' and the sound of waves hitting the beach, Campbell sincerely croons the love lyrics. His earnestness imbues the title pun 'I'll never rest / less you share my life and my love' with an unearned profundity. Presley never recorded this one, or some other gems on the disc such as the breezy 'Any Old Time' and the faux-gypsy tune 'Magic Fire', perhaps because they too closely sounded like other Presley releases, but Campbell's renditions are well worth hearing.

Sings for the King is a welcome addition to both the Campbell and Presley repertoires; Campbell for what is now heard, Presley for what was and was not issued. The demos here may not have been meant for a general release, but they stand up as worthy material that deserves a wider audience.