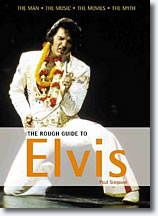 With perhaps more than a passing nod to Belgian author Mark Hendrickx's non-English super-biography, 'Muziek, Mens, Mythe,' 'The Rough Guide to Elvis' is subtitled 'The Man, The Music, The Movies, The Myth' and seems to have been written with equal concern for clarity and correctness -- Paul Simpson seems to be a genuine fan, rather than yet another author trying to cash in on the gullibility of the fan.

The Rough Guide To Elvis' 480 pages are chock-full of excellent information, which is written with style and conviction by someone who, despite his relatively young age (author Paul Simpson became a fan, apparently, when his mother bought him the 'That's The Way It Is' LP), has clearly done his research thoroughly and is interested in, perhaps even passionate about, his subject. Even the old-time fans will find something to interest them amongst the masses of information provided, and the younger or completely new fans are presented with intelligent discussions about aspects of Elvis, rather than the usual one-sided arguments. Thankfully, too, Paul pulls no punches and tells both the good and the bad, but always allowing the reader to make a final decision, or at least give them the opportunity to search further.

There are just so many aspects of Elvis' life and career that are presented in 'The Rough Guide' that it would require almost another book just to itemise them all. The reader will find, amongst other topics, the twin controversy, Elvis' close relationship with his mother, influences on Elvis, books about Elvis, the best fifty Elvis tracks (almost my own, but where's 'Suppose'?), complete discussions of his films, Elvis sites, both in the USA (and a few outside the USA!) and on the World Wide Web... well, it just goes on an on. And despite this enormous amount of information, it remains gloriously readable and enjoyable! The reader is not presented with interminable lists, but with well-defined sections that contain basic information, supplemented by sensible commentary and tips for further investigation.

Heck, the book is even illustrated! Sadly, most of the illustrations have a deliberate blue tinge, but there are some good pictures of Elvis here too, and not always the same old ones normally associated with the cheaper editions, either.

Author Paul Simpson makes some minor errors in the text, placing, by way of example, Elvis' final 'studio' recordings in November 1976, rather than the end of October, and intimating that the final songs he then recorded were 'Way Down' and 'It's Easy For You;' Ernst Jorgensen's own 'A Life In Music' lists these numbers during the same sessions, it's true, but the final two songs then recorded were 'Pledging My Love' and 'He'll Have To Go.' This is by far the most serious of errors that I noticed and I do not believe that it detracts significantly from the overall quality of the writing and the information provided, which is about as good as can be found anywhere.

The Rough Guide To Elvis must surely be destined to become the Elvis fans' Almanac. More than worth its price, a delight to read through or browse in. Do yourself a favour -- buy it!

Buy The Rough Guide To Elvis