We have been contacted by Richard Congelosi who worked for Jules Meyers Pontiac, Inc. Richard was hired in Dec, '69 and had an 'orientation' period to serve, in order to get an automobile sales license, officially he worked at the dealership from January 1970 to June 1974. Richard has provided some new information and pictures, including Elvis' car at the car show in 1970, following our story on Elvis' Stutz Blackhawks.

In January 1970 I went to work for Jules Meyers Pontiac, Inc. I started work and was doing well, getting a 'promotion' within 6 months to the finance office. I have to describe the atmosphere in this dealership, and it all came from Jules Meyers. He was/is a charming ambitious man with a taste for the 'good life'. He lived in Beverly Hills, (Three houses away from Raquel Welch). Like anyone with those attributes the converse applies, he could be caustic and direct. There is a lot of back story here but I will fast forward to the 'event(s)'.

Jules Meyers (Mr. Meyers, as he insisted on) had 51% of a coach building company based in Milan, Italy. The body of the Stutz Blackhawk was designed and produced there and was coupled with a Pontiac Grand Prix engine, transmission and chassis. If ANYONE in the world wanted one they HAD to speak with Jules Meyers. No employee could speak to anyone about this car or risk being terminated.

Although exclusivity was the buzz word, there were always 2-3 more cars hidden away in the Stutz shop garage, well managed by Jay Wertzburger. (I may have misspelled his name, it has been a long time) The idea being that they were 'one-off' cars. So the Stutz was sold on this basis - 'built exclusively for', so if someone wanted one, they had to wait because it was being built especially for them - even when they were already in the USA, in a garage and the buyer was kept waiting 6 months for his car to be built!! Marketing was Jules Meyers strong suit. Marketing strategies were very well thought out.

Also all of the early 70's cars were referred to as 'prototypes' because they all had minor body changes, windshields, rear window treatments, headlight, and taillights wheels, even interior changes, prototype lends itself to the exclusivity of it all. Not too surprising really, due to the hand built nature of the car.

After the 'Elvis Era' the cars were more 'mainstream', still very expensive, but more accessible to the rich-but-not-famous clientele.

When the word was out in 1970 about a new and exotic (for the time) car a few inquiries came through to Jules Meyers assistant Helene Stack. Evil Knievel, Sammy Davis Jr., Dean Martin, a few others, and of course, Frank Sinatra and Elvis Presley.

The choices for this first car were both a challenge and a delight to Mr. Meyers, for he alone was the negotiator, and everyone had to work around his schedule. Imagine, these powerful celebrities waiting for Mr. Meyres to get back to them! Anyway it came down to Elvis and Frank Sinatra.

Frank lost. The 1970 Stutz Blackhawk was presented and sold to Elvis at his home on Hillcrest Drive by Mr. Meyers on October 9, 1970.

As I recall the car was NOT supposed to go to the L.A. Car Show and promises were made, however I have a photo of Elvis' car at the show with the only 4 door version I have ever known about behind it.

When asked, it was denied that it was Elvis', when asked about how many there were, since this was the first and only one, the explanation was that BOTH cars there were sent over as special cars expressly for the auto show and were not saleable. They were, in fact the real cars. I remember being told that if anyone asks, this is NOT the same car. No one ever asked me, but I am sure that it was because it was not supposed to be there. As said above, marketing was key and Jules Meyers was all about promoting his product.

I was not involved with the sale of the 1970 car, but it did go to the auto show after promises were made that it would NOT. (This was a 'condition' set by Frank Sinatra, and was one reason he did not get this car).

The same 'condition' was ASKED by Elvis, but not so strongly and so it was sent anyway, and we all had to deny it as previously stated.

Unfortunately, this first Blackhawk car was involved in an accident on July 1, 1971 and the front was heavily damaged. Elvis had sent Sir Gerald, his L.A. chauffeur, out to have the car washed and it ended up in an accident. After that, Elvis put it in storage. Repairs to the car were not completed until the early 80s. 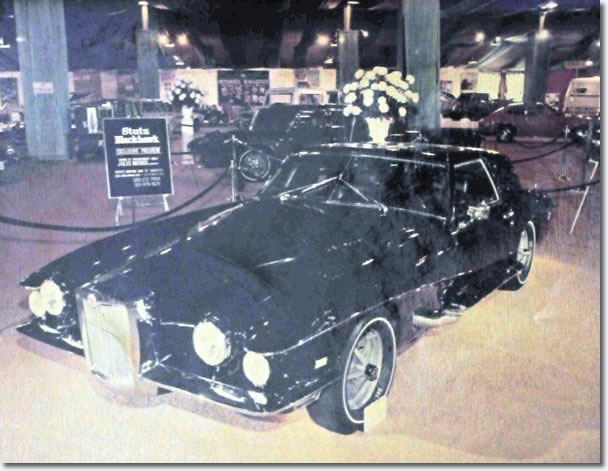 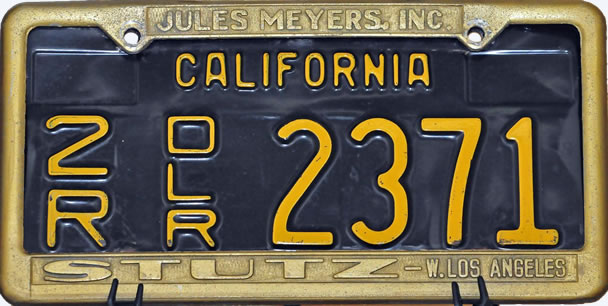 Above, the license plate and frame used to transport the car to Elvis Monovale home

On Sept. 10, 1971 Mr. Meyer came down from his office, (it was referred to as the Tower of Babel) and informed me, the sales manager, and a few others, that after close, (9pm) we were to stay because 'someone' was going to arrive and possibly purchase the Stutz. Of course rumours were flying, but no one was sure. Well, around 9:30 a large crowd started to gather outside the dealership, (the car always drew attention when it was in the showroom, as it was well lighted and sat in front of a huge bay window). We attributed the crowd to lookers and waited for our 'guest'. Mr. Meyers was back upstairs in the Tower, with Ms. Stack.

Not long after, a Lincoln, and a Cadillac drove in and parked behind the dealership and out came Elvis, Joe Esposito, Jerry Schilling, I believe it was Lamar Fike, hard to remember and a few of their friends.

The crowd out front was well aware that Elvis was coming and could have cared less about the car! It always amazes me that no matter the secrecy, security, if Elvis was around so were 100's of people.

I have been an Elvis fan since I was 10, and heard 'Good Rockin' Tonight' I was in absolute shock when he walked in and introduced himself. Mr. Myeres, then took over, showed Elvis the car, and then asked to have the 'report of sale' affixed to the car, it was then Elvis' car!

The car became Elvis' and arrangements were made to deliver it to 144 Monovale Road Beverly Hills.

Elvis had few, if any, requirements, no one was to drive the car, it would be kept secure in the Stutz shop until delivered. Elvis had more than one Stutz but that was the only time he arrived personally, in the dealership. The photo of Mr. Meyers handing Elvis the keys is well published. No none else was allowed in that shot. 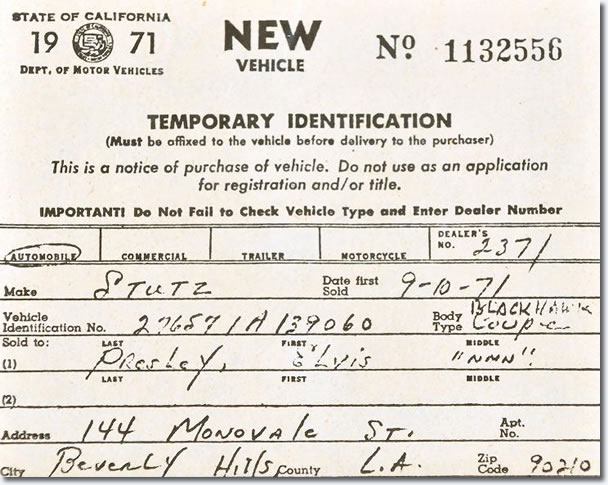 The Registration for the 1971 Stutz Blackhawk

We were all talking with the troop, Joanne Esposito worked at the Bank Of America in Century City with a very close friend of mine, so we had a little common ground, they were all a lot of fun and going nuts over all the cars! I made a copy of the report of sale (the vehicle registration - pictured above) and still have it, this has been printed in many magazines, since it is available through the Dept. Of Motor Vehicles in Calif. I was too struck to ask for an autograph, but to say that he was engaging is an understatement.

We were given comp tickets to his Las Vegas show, and he stayed with us for about 3-4 hours. The only photos that were taken were of Elvis and Mr. Meyers. (per Mr. Meyers) Of course I went to the show in Las Vegas (many, as a matter of fact) and spoke with Jerry Schilling quite a bit, in fact in March 1974 he came and bought a Trans Am with a check written by Elvis, (I have a copy, $6608.00, and handed me an original red tour jacket, these had the 'Elvis on Tour' and 'TCB' logos stitched on NOT glued as the 'available' ones had, and it had a key fob to a Ferrari Mondial in the pocket - I still have them.

Check written by Elvis for the purchase of a Trans Am

As said above, with each Stutz, there was always a 'plaque' attached to the dashboard that stated who the car was 'Made expressly for'. Despite Elvis' car being closely guarded, each time his car came to be serviced, someone took the plaque!! Employees, fans, anyone who wanted a genuine keepsake helped themselves.

These cars, Elvis' in particular, were handled by the aforementioned Jay Wertzberger, and kept closely guarded by many of Mr. Meyers' 'people'. A man whose name is Kressie Howard was Jules Meyers 'lot man', however he was entrusted with all things personal to Mr. Meyers, and had a very special place in the organization, he, too, kept close and careful watch over all things 'Meyers'. Being on his good side was a huge plus, he was very good to me, a little respect went a long way with him.

This car set J.M apart from the mediocre auto world, including the local Rolls-Royce dealer located not far from us at the time. (Rolls-Royce of Beverly Hills) and certainly was WAY above all other Pontiac dealers. A man named Stan Chazen had his Pontiac dealership not far from us in Santa Monica, Ca. But Jules Meyers had the automotive world for this time with the Stutz Blackhawk.

We also eventually sold one to Sammy Davis Jr., Dean Martin (whose license plate read 'Drunky') and Evil Knievil, who when he first looked at the car in the showroom announced out loud 'Elvis bought this piece of s--t! - I will never understand it!' and walked out. However he came back a while later and bought one, and was charged dearly for it.

Although there is more to this, I have given an overview, the arguments between Sinatra's people and Jules Meyers are the stuff of legend and no one will ever know the truth, but Sinatra was very angry not to have the first, and because of that never had one, even when asked. (This only refers to the 'Jules Meyers era of ownership'. Sinatra did have one much later, after the company was sold.)

Elvis was 'hot' and Jules Meyers knew a good thing when he saw it. However, due to his 'good life' style ignored the business end of it and the dealership was 'shut down' by GMAC. (another story) around 1975-1976. A lot of this is public knowledge now, but I was there when it happened and it was an exciting few years.