Back in the days when I was a teenager in South Wales, there was a disc jockey called Jack Jackson on the BBC Light Programme - the forerunner of day's Radio One. He was old enough to be my granddad, but everyone regarded him as really cool because he played all the latest American hit records, weeks before they were released here. That was how I first heard Elvis Presley. There was this new phenomenon, rock 'n' roll, which had given Bill Haley And His Comets a string of hits during 1955, from Shake Rattle And Roll to Rock Around The Clock and See You Later Alligator, and suddenly the world was waking up to a musical revolution.

Elvis Presley came in on that crest, but he had a style of his own. I listened to his first hit, Heartbreak Hotel, belting out through the tinny loudspeaker on our transistor radio on the kitchen dresser and it had an immediate and profound effect on the way my life was to develop. For Presley, Jackson assured us, was a white boy. I could hardly believe it for he was singing Southern-style black music as if he had been born to it Then came Blue Suede Shoes, I Want You, I Need You, I Love You, Hound Dog and Love Me Tender. By the following year, he'd given us Mystery Train, Rip It Up, Too Much, and then his first number one in Britain, All Shook Up. For me, a fledgling vocalist who had spent endless hours singing into a tape recorder trying to sound like a black American singer, Presley had shown that maybe mine wasn't such an impossible dream.

Radios weren't at all hi-tech in those days Very High Frequency (VHF) was far on the horizon and digital sound was more than 40 years away. So our 'trannie' made even the deepest voice sound thin and reedy.

Even so, and in spite of the wheezing and buzzing due to the incredibly bad reception of the times, nothing could detract from the sheer power and Soul of Presley's voice. 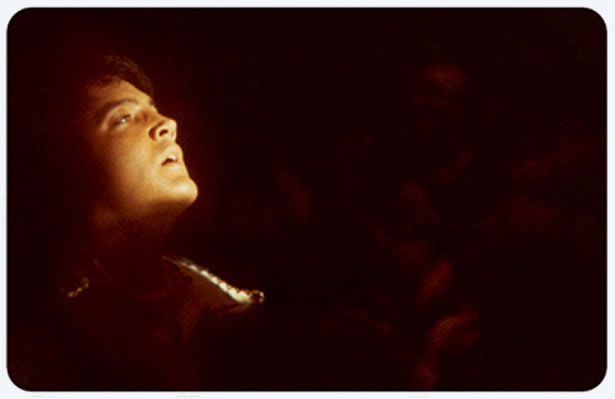 Elvis watching Tom Jones perform in 1974. Photos from the book : My Treasured Memories of Elvis by Judy Palmer.

In her photo above, Judy Palmer captured Elvis' profile in the half light of the stage spotlight. Elvis was in the audience of a Tom Jones show. Tom was about to introduce Elvis to his audience.

Somehow, I scraped together enough money to buy every new Presley release so that I could play them in the privacy of my bedroom - all the better to study his unique singing style. I never tried to copy him because I knew it was important to be my natural self. But I was inspired by him. Whenever we managed to see him on TV, which was rare, I would try to watch the way he swivelled his hips. This was more difficult than it seemed, for his lower body movements were deemed at the time to he so suggestive that the cameras weren't allowed to stray below his waist - just in case the viewers fainted in shock, I suppose!

But that early Elvis showed me a lot about body movement.

Most singers, when they go on stage, grip the microphone with both hands and just concentrate on what sound they're making. They don't really think about the way their body can help to deliver the words of a song, giving it more meaning, more punch. A lot of performers would worry that they might look silly, or too overtly sexual. But Elvis didn't care. He just did what felt natural. I did the same thing for myself. I thought, 'I want to go out there and do what I feel is natural for me'. And it worked.

Fast-forward to 1965. My own singing career had taken off, with three hit records and a big-selling album, and I was on my first trip to America. I went to Paramount Studios to talk about recording a song for a movie and someone told me that Elvis was filming on the neighboring sound stage and wanted to say hello.

I thought to myself, 'Oh, my God! Surely Elvis Presley doesn't know who I am'. But I walked on the set, where he was sitting in a helicopter, and he sort of waved in my direction. I couldn't believe he was waving at me, but I waved back, just in case. Then he came over and said he knew every track on my album and he sang one of my songs, With These Hands, all the way through. He said to me, 'How the hell do you sing like you do?' And I said, 'Well, you are to blame, because I listened to all your records in the 1950's.

He told me that when he heard me singing What's New Pussycat? on record, he thought I was black. I thought that was a bit ironic, as I'd thought he was black when I first heard him singing.

That was when our friendship began, but it wasn't until three years later, in 1968, that he paid me the ultimate compliment. He hadn't done any stage shows for some years because he'd been too busy making films and turning out hit records. He was making a stage come back in Las Vegas, but was nervous about whether audiences would accept him. The music scene had moved into groups by then, and I was one of the very few solo singers performing in Vegas, so he wanted to see how I went down.

Elvis watching me? I couldn't believe it.

Luckily, I didn't know in advance which show he would he attending; otherwise I'm sure I would've been terrified. Afterwards, he carne backstage and said I'd given him the confidence to perform live again. He told me, 'Everything's changed so much. Groups are big now, with The Beatles being so successful, and I was afraid that the day of the solo performer was over. Also, I didn't want to put on a show that would seem old-fashioned, but you've shown me that there's still a big demand for the sort of thing I do'.

So, Elvis made his comeback, and was a huge success. I was very pleased about that because I felt I'd been able to do something positive to help him in return for all the musical enjoyment he'd given me. He, though, didn't see it like that. He was a generous man and I think he always felt he owed me.

Another time in Vegas I was having some trouble with my backing singers, who had taken offence at a joke I had made on stage. Elvis decided to solve my problem by making me a present of another group. Without my knowing, he flew them to Vegas, put them up in a nice hotel - all at his own expense - and then brought them to my room to audition. It was thoughtful of him, but I explained that I had a binding contract with my own singers, The Blossoms, and there was no way I could replace them without being sued. Elvis' singers were disappointed; but he didn't let them go away empty-handed. He went into the bathroom, ripped off a piece of toilet paper and wrote out a contract for them to sign - paying them $100,000 to work with him.

Our friendship was built on mutual respect and a shared interest in music.

I never sat at his feet, looking up to him, because we regarded each other as equals.

Anyway, he was much too modest to be comfortable with someone who fawned around him and was never afraid to admit to his own vulnerability - always the mark of the truly great. 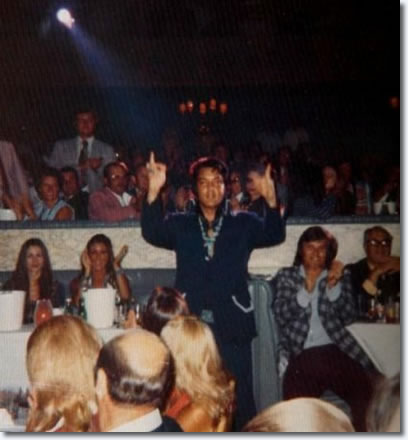 Here is Elvis on September 4, 1973, as Tom Jones introduces him to the audience. Note Linda Thompson to Elvis' right.

Once, he asked me how I coped with success.

I told him it wasn't difficult for me because I had wanted it for so very long. He said that he had tried taking different drugs just to keep sane and always needed a little help in that direction to get out there on stage. 'Haven't you gone through any of that stuff?' he asked me. And he seemed rather surprised when I said no, I stayed away from it with my life, but I do like to relax with a drink in my hand. 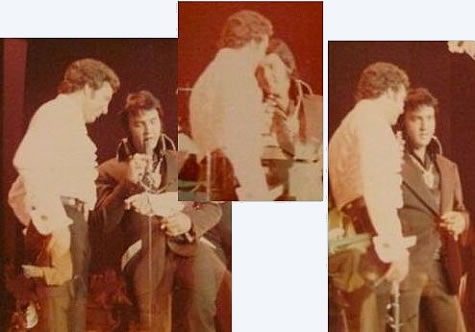 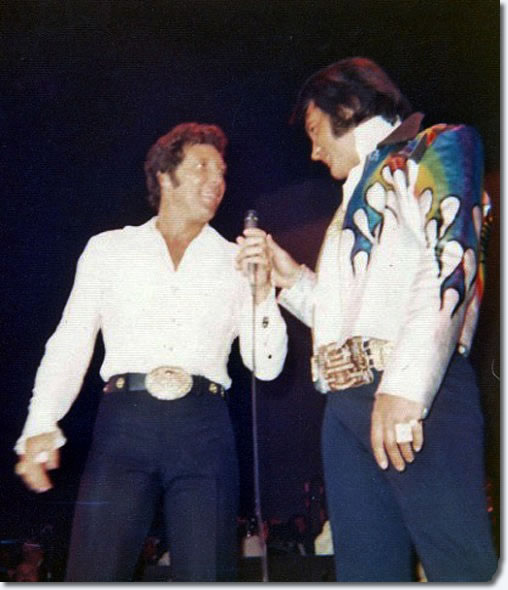 Later, he said he'd made some changes in his own life and had finally straightened himself out. His wife, Priscilla, told me that when Elvis and I were together, he seemed to be a different person, much happier in himself. We spent some time in Hawaii together, just sitting side by side playing guitar and singing, with no one else around. We were like two kids, best friends, doing what they do best. We'd sit and jam all through the night, but unfortunately we never made any tapes or took any photographs, so there's no record of that little bit of musical history. Priscilla told me, 'I've never seen this side of Elvis before. He's so pleased to have someone around that really understands what he's doing musically'.

We remained friends to the end, and even though I've made many changes of musical direction over the years, I still look back with great fondness and admiration for a great man and a remarkable singer.

Tom Jones : His manager Colonel Tom Parker was opposed to 'his boy' going anywhere that might promote a rival artiste, 'but Elvis wants to see Tom perform so we're coming anyway', said his road manager Joe Esposito when he called me to ensure that Presley and his entourage would have a ringside table. After the show Elvis came backstage and hugged Tom while lavishing him with praise. Toms wife and Priscilla sat in the corner showing each other photographs of their respective new daughters, Joanne and Lisa Marie.

Elvis reportedly said 'You lit a fire in me tonight, 'I'm going to tell that old man I need to get back on the road'. And, sure enough, he phoned the Colonel the following day to demand that instead of signing him up to make more indifferent movies he had to set up a stage comeback.

Read the full story and view the photos. 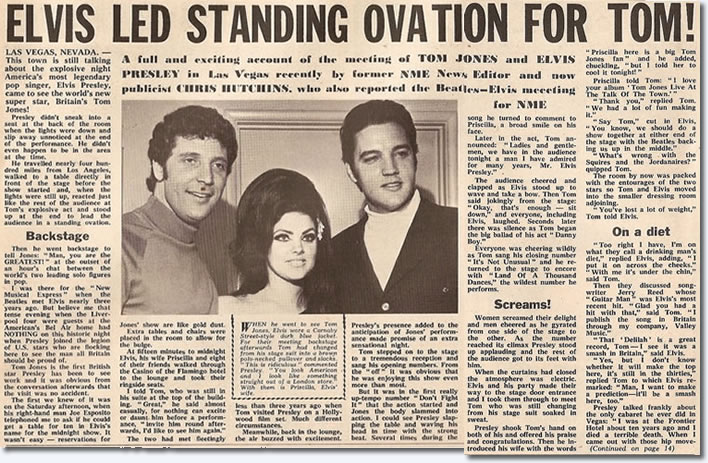 Read the full story and view the photos