I enjoy exploring all different areas of Elvis' career. With Follow That Dream's recent announcement that Amarillo '77 will be among its June CD releases, I thought this would be a good time to take a look back at the 1977 recordings available to this point. Not including FTD's New Year's Eve audience recording, there have been three key official releases of 1977 concert material in the years since the death of Elvis:

All three of these releases have something to offer fans who are willing to listen.

'Unchained Melody' contains one of my favorite Elvis performances from any time, a stirring rendition of Where No One Stands Alone, with Elvis leading the way on piano. Recorded February 16 in Montgomery, Alabama, this marks the only known instance of Elvis performing this song live.

I actually prefer this nearly heart-wrenching version over his 1966 studio master of the song, recorded for How Great Thou Art. After hearing the raw emotions of this live version, the studio version sounds almost antiseptic – as if in 1966 Elvis had not really lived enough to fully convey the song compared to eleven years later.

Just a few days later, on February 21 in Charlotte, North Carolina, Elvis pulls out a blues number that he seemed to always have ready in his back pocket – Reconsider Baby.

Though Elvis formally recorded the song in 1960 for Elvis Is Back!, a 1956 version of the song from 'The Million Dollar Quartet' jam at Sun Records made its debut on 'The King of Rock 'n' Roll' box setin 1992.

Live versions from 1961, 1969, and 1972 have also been released, all of which, like this 1977 track and its predecessor on New Year's Eve, feature a committed Elvis. Lowell Fulson first recorded the song in 1954, around the same time that Elvis recorded Good Rockin' Tonight. In Charlotte, Reconsider Baby is a good performance. Elvis never lost his feel for the blues.

At that same February 21, concert, Elvis also performs the only known live version of Moody Blue (outside of giving up after a false start in the same city the night before). This is another good performance. It is sometimes amazing how well Elvis could sing a song that he admittedly did not know. It is also a testament to the work of the TCB Band, that they could carry him when all he had was a lyric sheet. Lyric sheet or not, this is still a worthy listen.

At a Valentine's Day show in St. Petersburg, Elvis takes over the piano momentarily from Tony Brown to show him how to play the intro to Blueberry Hill. What follows is a fantastic, though all too brief, take on the song – which Elvis first recorded in 1957.

A February 18 performance of Release Me in Columbia, South Carolina, is another highlight. For the briefest of moments, it sounds like it could be 1970 – but only a moment.

The highlight of 'Spring Tours 77' is beyond a doubt his March 26 performance of Blue Christmas in Norman, Oklahoma. The song takes on a different tone here than his bluesier 1968 live versions or his 1957 studio version.

He sounds desperately sad, which is only underscored by our knowledge that he has already celebrated his final Christmas by this point. While I like the performance, this is not something I've added to my normal Christmas rotation. It's just too sad.

The often-underrated 'Elvis In Concert' contains a number of fine performances, including one of his best ever versions of My Way on June 21 in Rapid City. A brief snippet of I Really Don't Want To Know from that same show also illustrates that he could still tap into his power.

Even Omaha on June 19, sometimes described by others as one of his worst concerts, offers up a decent version of How Great Thou Art and an entertaining performance of And I Love You So.

My original intent in all of this was not to go through track-by-track highlights of 1977, but to point out that even one of Elvis' lesser years can still hold magic. It is a mistake to focus only on certain aspects of Elvis' career and to ignore the rest. While 1968-1971 may indeed be my personal favorite span, I would not want that to be the only Elvis I ever hear.

It is also unfair to use peak moments like 1968-1972 or 1954-1958 as the measuring sticks for everything else. Of course, everything is going to pale in comparison to those very special times in his life, but that does not mean that it lacks value. 1977 should not be ignored, not by Elvis Presley Enterprises, not by Sony & FTD, and most of all, not by us – his fans. I commend FTD for deciding to release 'Amarillo '77'.

So, pull out those 1977 recordings and give them a spin. He was on that stage for his fans, and he left these and other recordings as part of his legacy. They are an essential part of understanding the whole Elvis.

Below is the track listing:

On June 21, there will be three (3) new releases available from FTD: 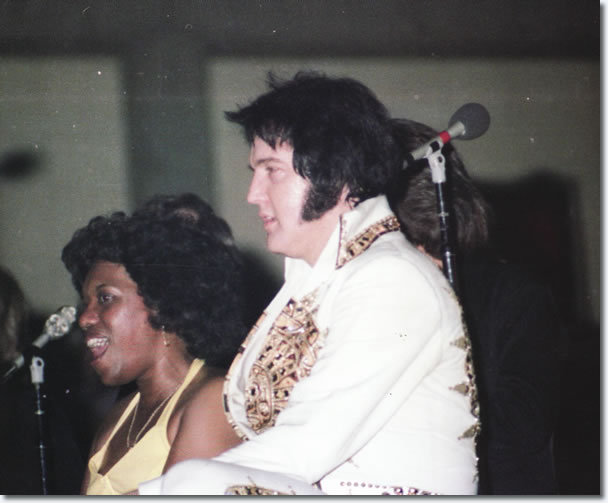 Elvis Presley takes a break during his performance, Macon, GA on June 1, 1977. From the book, Elvis '77 The Final Curtain.