View a colour video of Elvis marrying Priscilla Beaulieu on May 1, 1967 (Silent Footage).

On May 1, 1967 Elvis and Priscilla are married in a private ceremony amongst a small group of family and friends at the Aladdin Hotel in Las Vegas, just after 9:30 AM. A press conference and breakfast reception follow. The couple honeymoon for a few days in Palm Springs. Then they return to Memphis.

It was the first marriage for both.

The couple was wed in a quiet ceremony in Prell's suite at the Aladdin at 9 a.m. The new Mrs. Presley is the daughter of an Air Force Col. and Mrs. Joseph Beaulieu of San Francisco.

The Memphis troubadour and his gray-eyed brunette bride-to-be landed at McCarran Airport early Monday morning, and drove with friends to county courthouse where they obtained their marriage license at 3:30 a.m. 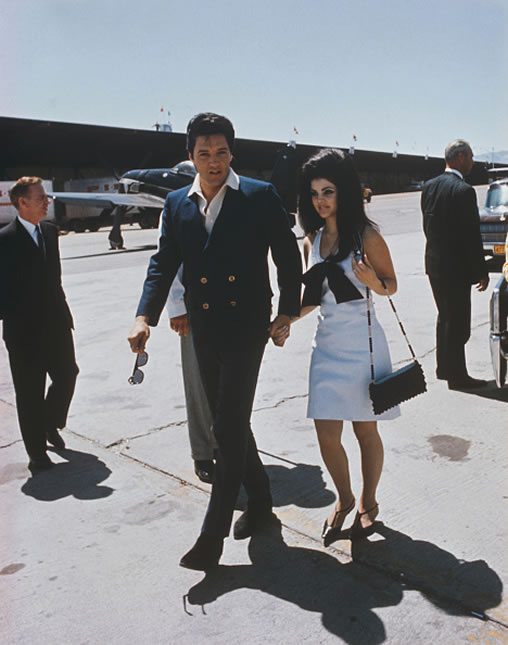 'Elvis Presley with his wife Priscilla Presley at an airport during their honeymoon journey from Las Vegas, Nevada to Palm Springs, California in May 1967'.

The bride and groom cut a six-tiered wedding cake. Presley wore a black brocade silk tuxedo and Western boots, while Priscilla wore a floor-length wedding gown of her own design: white silk chiffon, with beaded yoke, trimmed in seed pearls and topped with a three-foot tulle veil secured by a rhinestone crown.

At a short press conference following the banquet, Presley said he had met his bride six years ago in Germany when he was in the Army. The bride's mother, Mrs. Anne Beaulieu, said, 'They became very close friends at the time, but I don't think any of us had thought they'd get married'.

Priscilla stayed with Presley's father and stepmother at the family mansion, 'Graceland', when she graduated From a Memphis high school in 1963.

During the press conference, the bride's parents, her brother Don, 17, and her 13-year-old sister Michelle, sat with Elvis' parents, Mr. and Mrs. Vernon Presley.

When a newsman commented, 'Snap him (Elvis) smiling. He doesn't smile much lately', Presley joked, 'How can you look happy when you're scared?' The Presley smile was very much in evidence when he laughed and yelled, 'Daddy, help!'

Presley's father, seated across the crowded room, said: 'Can't do it, son. You're on your own'.

Comedian Redd Foxx, also on hand for the festivities, said, 'It's the best thing that happened...to me'.

Presley said he and his bride would 'most likely live in Memphis', adding they intended to honeymoon in the United States and had 'given no thought to leaving the country'.

'Colonel Tom Parker (Presley's manager), and Prell have been friends for about 20 years', said a Aladdin spokesman. 'They're neighbors in Palm Springs'. Presley often stayed at the Sahara Hotel when Prell was its owner. The couple left for McCarrran Airport immediately after the press conference. 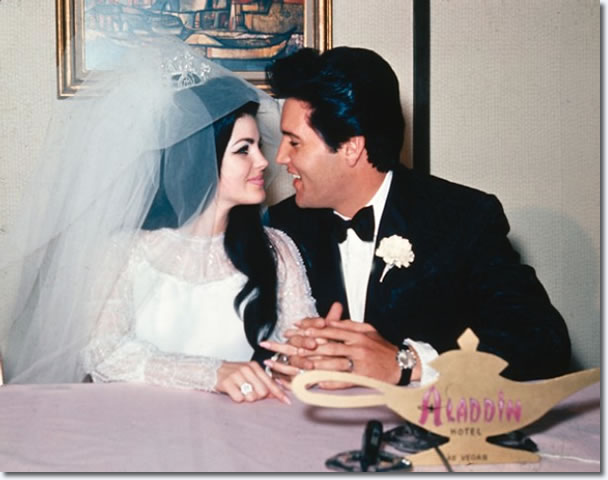