Elvis was named after his father, Vernon Elvis Presley, and Mr. Presley's good friend in Tupelo, Aaron Kennedy. Aron was the spelling the Presleys chose, either it was a spelling mistake or apparently to make it similar to the middle name of Elvis' stillborn identical twin, Jesse Garon Presley. Jesse was apparently named after Vernon's father, Jessie Pressley, (Yes there are two s') although the spelling was slightly different.

Toward the end of his life, Elvis sought to change the spelling of his middle name to the traditional and biblical Aaron. In the process he learned that official state records had inexplicably listed it as Aaron, and not Aron as on his original birth records. Knowing Elvis' plans for his middle name, Aaron is the spelling his father chose for Elvis' tombstone, and it's the spelling his estate has designated as the official spelling when the middle name is used today. In Memphis, Elvis was enrolled in the eighth grade at Humes High School, as Elvis Aaron Presley.

Similarly, there is some slight confusion regarding the spelling of Elvis' twin, Jesse Garon's name. Most reliable resources have the spelling as Jesse. However, near the graves of Elvis, his parents and his grandmother at Graceland is a marker the family placed in memory of Elvis' twin, but the spelling is Jessie for reasons we have yet to determine. Jesse Garon's actual grave site is in Tupelo, MS where it has always been, but it remains unmarked by a tombstone. Lack of money in the family's early years was likely the reason.

Then, once Elvis became wealthy and famous, the grave, which is in a public cemetery, remained unmarked most likely in the interest of privacy. Because of the spelling on the marker at Graceland, EPE tend's to use the spelling Jessie to avoid confusion. The following : From the book Elvis and The Memphis Mafia by Alanna Nash.

Billy Smith: One day in late '66, I was talking to Elvis about religion, and he bought up Aaron. I said, 'That's something I've always wondered, Elvis. How come you spell 'Aaron' with one 'A' when it's two 'A's' in the Bible? Because Elvis might have been named for Vernon's friend Aaron Kennedy, but he always referred to it as a Hebrew name and how Aaron was the brother of Moses. And he said, 'Well, back when I was growing up, a lot of people around Tupelo didn't spell right'. Elvis looked over at Vernon and said, 'As a matter of fact, Daddy, from now on, I want my name written with two 'A's, espesially on legal documents'.

That's why it has two 'A's on the gravestone. (Below, Vernon Presley at Elvis' grave at Graceland.) 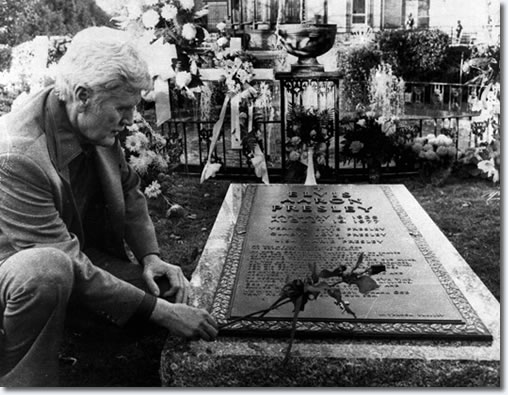