Elvis Australia was founded in 1996 by David Troedson. The site began as 'For Elvis Fans Only' while the domain www.elvis.com.au was literally born from the concept of wanting to represent 'Elvis in Australia', so ... www.elvis.com.au ...

Our first website largely revolved around audio and photos before moving on to a new concept, that being 'news', with this website being the originator of the 'Elvis news' concept, quickly became the single most popular Elvis Presley fan site, (and remains so today), a fact our team of contributors is proud of.

Below, view the oldest front pages for www.elvis.com.au ... The website design is long gone but we managed to find several front page layouts, it is interesting to see how much wed design has changed!

Some of our most popular and acclaimed articles; 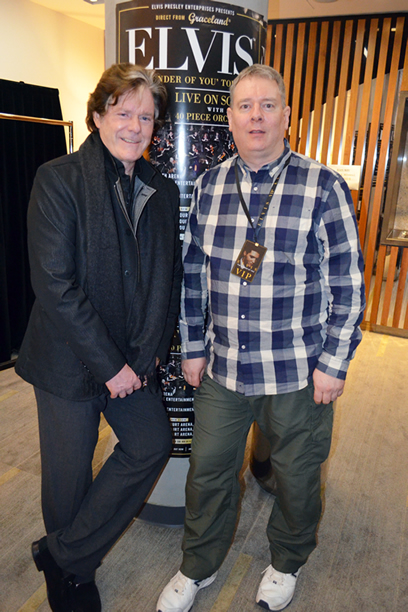 Jerry Schilling and David Troedson, backstage 'The Wonder OF You' Concert June 9, 2017.

My first PC came in 1996, and the Internet was of immediate interest, and with that, the idea of making a website came easily. And of course the website had to be about Elvis Presley!!

The seed of my Elvis obsession came in January 1978. Believe it or not at 13 years of age, I had never heard of Elvis Presley. Not until my grandmother mentioned his name on January 8, 1978 and the mornings newspapers were filled with remembrances and the all important Elvis poster, something I looked out for each Christmas holiday for, as I recall, several years.

In 2010 David Troedson and Wayne Hawthorne co-produced Elvis Presley : 50 Australian Top Ten Hits 1956-1977 which debuted at No. 9 on the Australian ARIA album chart.

Where Do I Go from Here?

Elvis Presley SongDataBase : Like a song and want to find what CD to buy with it on?

Elvis Interviews (about and with) and articles.

Graceland : yep, all about Elvis home