The difference between Lisa Marie Presley's concert performance at the Melbourne Art Centre last night and that at Crown Casino Melbourne 10 years ago is vast - in short, it was one of the BEST live performances I have ever seen. Lisa's musical progression is remarkable. Largely based on her extraordinary critically acclaimed 'Storm & Grace' album the concert opened with a strong 'So Long' ('... Farewell, fair weathered friends ... I can't say I'll miss you in the end ...') before what is for me my favorite of her songs, 'Over Me'. Taking nothing away from the former, I felt in fact it was a testament to that song that it could open when for me 'Over Me' is the perfect opener, made all the better as it turned out coming up second.

Taste is a personal thing so I can obviously only speak for myself but I can say for sure that if you like what you hear in the music videos that have been released online then you will love Lisa in concert many times over.

Lisa and her talented band have no problem reproducing what they have created in the studio - a 100% sure way of knowing the music is very real. Indeed being live Lisa surpassed many vocally. 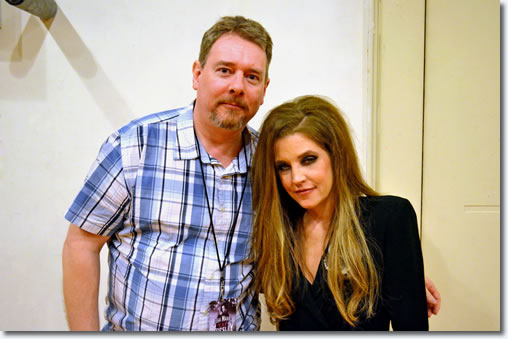 The setting was very different, an intimate setting as opposed to the large room at Crown, with a somewhat 'odd' artist-audience interaction with what the Melbourne 'Age' wrote of this show as 'a vocal minority thought she was here for a chat - about her hair, her weight, her family and other inanities which she fielded with remarkable patience', this is their perspective and I although understand it, I still would say to them 'bite me', as it did not come across that way to me, it was very much clear to me the love for Lisa in the 'room' and also indeed how remarkably well Lisa responded I believe genuinely appreciative of the many comments called out.

NOT only answering all but if she did not fully hear a comment she would stop and ask for it to be repeated.

Lisa actually stated, and repeated that it was sincere, that she had been in a dark mood earlier and that the audience had really brought her out of it. (The Melbourne Age's review is clearly by someone who would have a lesser view of Elvis no doubt and would not for a second understand the unique relationship people have with Lisa, it is genuine and Lisa clear understands and appreciates it). Although husband Michael Lockwood did comment 'maybe every one can have a turn' at which point perhaps enough was enough. Distracting NO. Between songs and very warm. Lisa also stated this audience was by far the best of the tour!!!

The Kings Daughter and Expectations

If you go to see 'Lisa Marie Presley', Elvis Presley's daughter then it is possible you are going with expectations based on the wrong thing. Too many fans did this in 2004, and if expectations are not met then they are disappointed. Many expect another Elvis Presley. Really you should not be going unless you have already purchased and ENJOY the Storm & Grace CD. Why else would you go? If you enjoy the CD and go with an attitude of 'Lisa who are you?' rather than 'Lisa I expect you to be ...' then all that is left is the music, and you already like that. THIS IS WHY Lisa recently said 'When people are looking at me, I don't know what they are thinking. Are they looking at my dad, are they seeing me for me now?' she says. 'By the time I am done with the show, I am my own thing. I am me and I don't do what he does. 'I can differentiate between them pretty quickly now', she says, laughing.

As one review said 'Lisa has found her voice', meaning her own and extremely good style. And from 'Rolling Stone', 'Storm & Grace is the album she was born to make – a raw, powerful, country, folk and blues collection ...'. I could not agree more with each. Just go and see the show. You wont regret it.

Lisa is promoting World Vision, an organization addressing worldwide childhood poverty, during the tour, and she asked the World Vision representatives after the show how many people signed up and was told 'three' which she seemed pleased about. Indeed this is a great cause.

I attended the Lisa Marie Presley concert in Bendigo on Friday Night. Lisa received a standing ovation from a packed house, she also commented that this audience was by far the best on her Australian tour, and she had no idea before coming to Bendigo how wonderful a country town like Bendigo would be.

Each of us knows she is not the artist her father was, and this will always be her burden, with that perception from the audience, her musicians were as good as any Rock Band I have seen in the past 10 years and her concert was different but unique. Consequently she has the looks of her father. Elvis will be never dead while she walks our great planet.

I agree with the so called critics, that Storm and Grace is a extraordinary CD, her new Husband seems to have given her the passion to get back in the music industry, and I can only hope she continues to make many more albums in the future. Gary Brown / Australia.

Tickets still available for Frankston and possibly the other two venues.

I did not write down the song list, but this list given at previous concerts recently looks right.

So Long
Over Me
Storm of Nails
Weary
You Ain't Seen Nothin' Yet
Just Like a Dream
Storm and Grace
People
Idiot
Lights Out
S.O.B.
Soften the Blows
Un-Break
Sticks and Stones
I'll Figure It Out
Need to Know

The King and I: Lisa Marie Presley can spot her true fans in a crowd of Elvis followers

Buy Elvis By The Presleys DVD