Woman With Elvis No Longer A Mystery

For 27 years, the mother says she has remained silent, watching over and over as her daughter showed up in photographs on a motorcycle with Elvis Presley.

Each time, the daughter has been referred to as 'an unidentified woman'. 'I just didn't want her to go on as an unidentified woman,' says the mother, Peggy Selph Cannon of Bartlett, after the photograph appeared in The Commercial Appeal's special Turn of the Century section on Jan. 1. 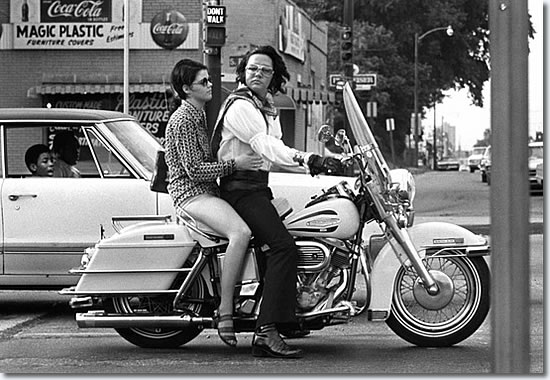 Cannon says her daughter, Kathleen 'Kathy' Selph, then 20, was being driven home by Elvis when the picture was shot by a photographer for The Commercial Appeal in June 1972. A neighbor showed her the photograph in the newspaper that week, and Cannon says she 'reprimanded' her daughter for dating a married man. That's when she learned that Elvis and Priscilla Presley had separated.

The daughter, who had moved out of her parents' home, had been working as a dancer and singer at the old Whirlaway Club, where a member of Elvis' Memphis Mafia noticed she resembled Priscilla Presley, says Selph's brother, Steve. His sister and Elvis were introduced and dated for a while, he says.

It ended less than a month after the photograph was taken when Selph died in an automobile accident. 'There was a real nice spray of flowers at her funeral from the Presley family. And there was a huge orchid at the funeral. I always felt it came from Elvis,' says Cannon, who remarried after the death of her husband, former deputy fire chief E. B. Selph.

Elvis Presley - The Man And His Motorcycles