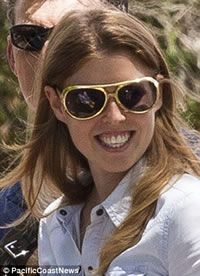 Princes William and Harry today paid homage to the king of rock n' roll Elvis Presley with a private tour of Graceland.

The princes were dressed casually and 'Elvis' wearing sunglasses as they wandered around the white-columned mansion in Memphis, Tennessee on Friday afternoon during a visit to Memphis.

The royal group, which also included Princesses Beatrice and Eugenie,.

During the visit, Harry, casually dressed in a blue polo neck, was spotted with a pair of black headphones and an orange lanyard round his neck as he listened intently to the audio tour guiding him around the 14-acre estate's mansion. A staff member at the visitor attraction said: 'It is pretty special to have a future king take time to come to visit The King'.

Dressed for the outing in jeans and a lilac-colored oxford shirt, the Duke of Cambridge, 31, joined his younger brother, 29, and a few others for a private tour of Elvis' beloved mansion. They arrived in a caravan of black SUVs and were later photographed walking around the grounds of the 14-acre property, which includes a trophy building, a meditation garden, and a racquetball court that now serves as an exhibit of the singer's career from 1972 to 1977. At one point, the group was spotted wearing gold Elvis-style sunglasses.

First opened to the public in 1982, Graceland is overflowing with Elvis artifacts -- his jumpsuits, gold records, Grammys, and even keepsakes from his life with wife Priscilla Presley and daughter Lisa Marie Presley. Hundreds of thousands of visitors flock to the estate every year, including celebs like Paul McCartney, Kristen Stewart, Mia Farrow, and Ashton Kutcher and Mila Kunis. 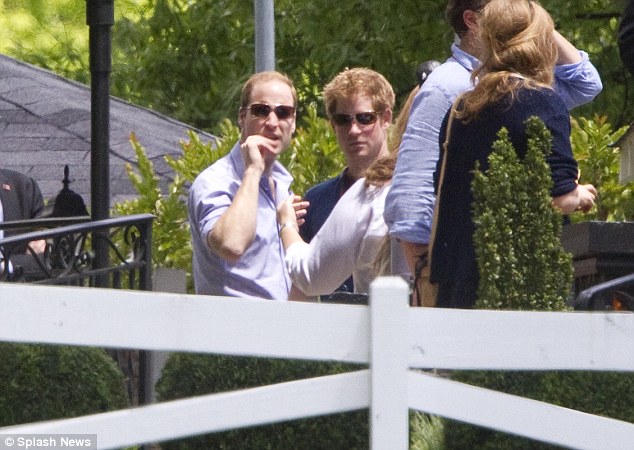