On Sunday, May 26, 2013 Paul McCartney dropped by Graceland to pay tribute to Elvis Presley. In his first-ever visit to Elvis' home, McCartney was given a tour of Graceland during which he was offered a rare glimpse inside the Graceland Archives. To maintain the integrity of Elvis' instruments, the archive staff regularly tuned them. So who better to tune Elvis' guitar than the songwriting legend. McCartney briefly played Elvis' 1956 Gibson J200 guitar while humming the famous Elvis tune Loving You. (Paul owns Bill Blacks Upright Bass)

Below you can listen to Paul singing Loving You recorded at the time of his 1973 TV Special, during the acoustic bit they filmed although the song was edited out, the same for We're Gonna Move.) 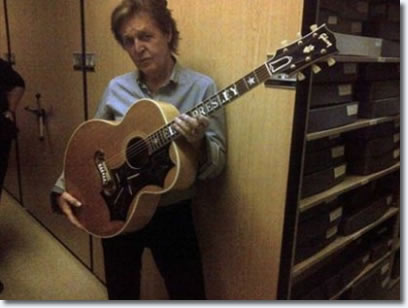 Also in true Elvis fashion, when other musicians and friends would visit the king at Graceland, the visit would almost always end in the Music Room around the piano. McCartney's visit was no different as he played Elvis' Story and Clark piano inside the Graceland mansion. Something both Elvis and Paul have in common is that neither of them read sheet music, they simply play by ear. The first photo above shows Paul with one of Elvis' Gibson J200 acoustic guitars in the archive section of Graceland. And below, Paul is photographed showing one of his guitar picks he is about to leave at Elvis' grave, later stating 'so Elvis could play in heaven'. 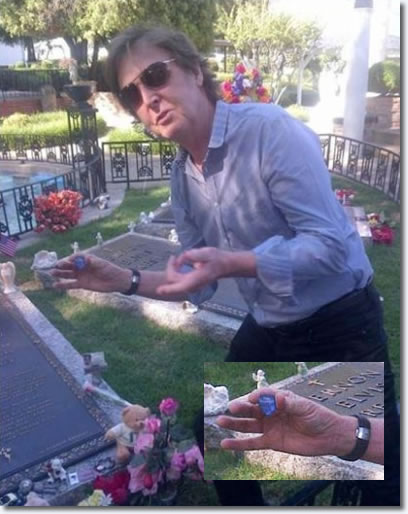 Paul McCartney at Elvis' grave, holding one of is personalised guitar picks that he is about to leave. View larger image. 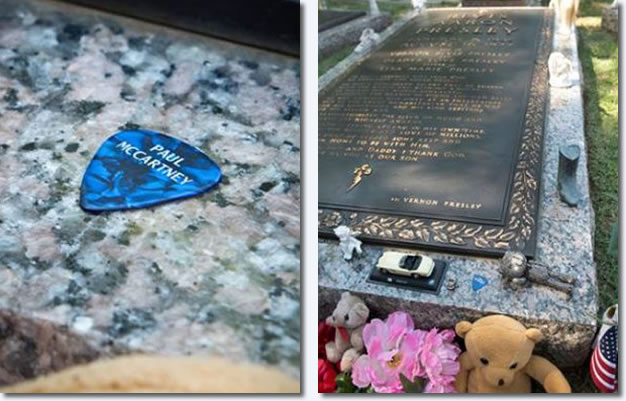 Paul McCartney's guitar pick to the side of Elvis' grave.

On August 27, 1965, the Beatles visited with Elvis for several hours at his home in California and had an informal jam session. Both McCartney and fellow Beatle John Lennon often cited Elvis as an influence. Elvis recorded three of The Beatles songs such as Something, Yesterday (live) and Hey Jude (Studio 1969).

Paul later released the following statement: 'Without Elvis, There Would Be No Beatles'.

Below you can listen to Paul singing, Loving You, We're Gonna Move, That's All Right and It's Now Or Never. Loving You and We're Gonna Move has never been officially released, they were recorded at the time of the 1973 'James Paul McCartney & Wings' TV Special, during the acoustic part filmed although the songs were edited out.