For almost as long as there's been rock 'n' roll, Los Angeles has been a city at the center of its history and mythology, a town in which legends are made, burned, rebuilt, merchandised, forgotten. The city has had its fair share of native rock talent, and has been the adopted home of many more singular rockin' careers, but perhaps the greatest of L.A.'s rock 'n' roll tête-à-têtes occurred on a still summer night in 1965, high up in the rarefied climes of Bel Air. There, in a splendid home on Perugia Way, Elvis met the Beatles.

Or more precisely, the Beatles met Elvis. When the group traveled to the U.S. in 1964, they frequently cited Elvis as a major influence. Beatles manager Brian Epstein contacted Presleys manager, the famously colorful Colonel Tom Parker, about organizing a meeting, but the logistics could never be worked out. The closest the Fab Four got to contact with the King came after their first visit to The Ed Sullivan Show, when the curiously charisma-deficient host read from a telegram: 'Congratulations on your appearance on The Ed Sullivan Show and your visit to Amer­ica. We hope your engagement will be a successful one and your visit pleasant. Give our best to Mr. Sullivan. Sincerely, Elvis & the Colonel'. 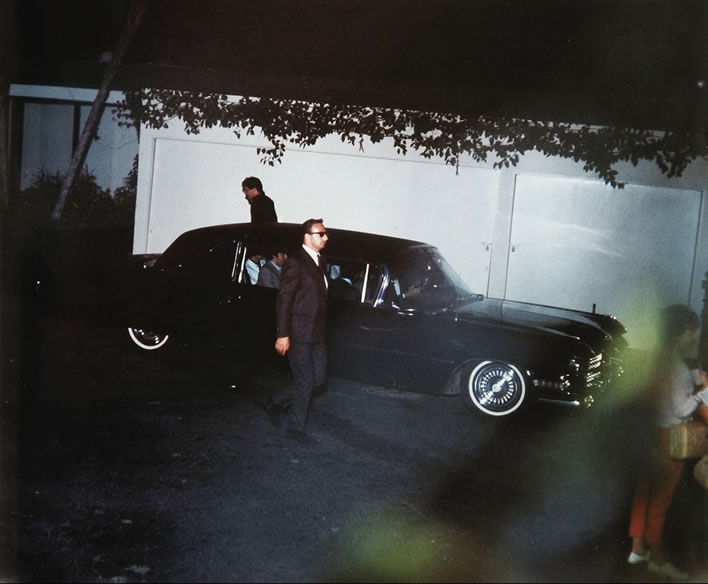 The following year, when the Beatles returned for a second U.S. tour, it all came together. The Beatles were in Los Angeles for a week, staying in a rented Benedict Canyon house while they played two nights at the Hollywood Bowl. Elvis was at his home on Perugia Way in Bel Air, having just returned from location, shooting his latest movie, Paradise, Hawaiian Style.

Epstein again initiated contact with Colonel Parker, and the decision was made that on the night of August 27, the Beatles would come to Elvis' home for an informal get-together. Intensive security arrangements were worked out, and it was agreed that no press would be involved and no pictures would be taken or recordings made of whatever happened.

'So many things could have gone wrong', says Jerry Schilling, who was living at the Perugia house at the time and working as a member of the Memphis Mafia', the entourage of guys who tended to all manner of Presleys personal and professional needs. 'If Colonel and Brian hadn't gotten along, it wouldn't have gotten past the phone-call stage. But there were no ego battles, and from the start it was approached as a pair of music greats coming together out of admiration for each other'.

The uncomfortable subtext to the meeting was that, in 1965, Presley's moments of musical greatness were behind him, and he had become deeply despondent over the string of mediocre films and uninspired soundtrack material he found himself contractually bound to deliver. 'I remember asking him once what his next movie was going to be', recalls George Klein, a pioneering rock 'n' roll disc jockey in Memphis, who began a lifelong friendship with Presley when the two met in an eighth grade music class. 'He said, 'Same story, different location. I beat up the bad guys, get the girl and sing 10 lousy songs'. But as down as he was about what he was doing, I don't think he really felt threatened by the Beatles. He appreciated the excitement of their records, and he thought they were fine songwriters. I remember him saying several times, 'There's room enough for everybody'. Probably me and some of the other guys around Elvis felt more defensive than he ever did'.

A fun animated video look at how the meeting went (03:51)

Just before 10 p.m. on the 27th, Colonel Parker and Memphis Mafia 'foreman' Joe Esposito rode in limos over to the Beatles Benedict Canyon house, picked up John, Paul, George, Ringo, Epstein and the Beatles' road manager, Mal Evans, and returned to Perugia Way. 'There was a huge crowd of fans at the gate to Elvis' house', recalls Esposito. 'The Colonel didn't want any press, but he leaked word to a few fan clubs so that there'd be some excitement outside'.

Elvis and then-girlfriend (later wife) Priscilla Beaulieu met the Beatles at the door of the home, and as introductions were made between the Beatles and the seven or so Mafia members, the group moved to the smaller of two den areas, which was equipped with a large TV, a stereo system and a bar. As everyone found a place, there was an awkward lull. The two greatest rock 'n' roll acts in the world were finally together, face to face. Now what was supposed to happen?

'No matter who you are', says Schilling, 'walking into Elvis Presley's house is a different experience. His presence put things on a certain level, and I think the Beatles could feel that. But Elvis knew how to handle it. He said, 'If you guys are just going to sit around and stare at me, I'm going to bed'. That broke the ice and got a laugh out of everybody. Right away, the Beatles understood that Elvis was a guy with a sense of humor, and a guy who really loved crazy British humor. It wasn't too long before John and Elvis were talking about Peter Sellers and favorite scenes from 'Dr. Strangelove'.

With the mood loosened up, the gathering turned into a friendly, free-flowing affair. Colonel Parker and Esposito oversaw the action at a craps table and roulette wheel that had been set up in the home's larger den, while Larry Geller and Mafia member Alan Fortas).

'I think there was probably some nervousness on both sides when the night began', says Esposito. 'But it turned out to be a really enjoyable, down-to-earth, getting-to-know-you situation. Not a wild party, just a really fun night. For us, it was great to see Elvis enjoying himself that way'.

Early on, Elvis showed off one of his musical pastimes to John Lennon and Paul McCartney, plugging a Fen­der bass into an amp to play along to records. Charlie Rich's 'Mohair Sam' was a favorite that summer, and Elvis nailed the boogeying bass line. There were guitars in the house, and there are varying accounts as to what extent the rock luminaries jammed. Esposito remembers a few '50s oldies, not Elvis tunes, getting a run-through, though the left-handed McCartney had trouble doing much with a guitar strung for a right-hander. Schilling remembers Elvis playing bass but doesn't recall any serious jamming. 'I was paying attention that night', he laughs. 'That's something I wouldn't have missed'.

Whatever music got made, the four-hour get-together was successful enough that the Beatles wanted to return the favor, inviting some of Elvis' guys to spend time where they were staying. 'Just as they were leaving', Schilling recalls, 'John said to me, 'I know Elvis can't get out, but if you'd like to come up to our place, we'll be there the next few days'.

So Schilling found himself on a Benedict Canyon patio, at a table with John, Paul and George (Ringo was inside, on the phone with his wife). Either because they were freshly shampooed or wanted to protect their hair from the sun, the three Beatles had their heads wrapped in towels. Schilling remembers one other detail from that afternoon: 'I was amazed watching their security guys grab up these girls who were scaling the canyon walls to get to the band, but the Beatles were so used to it they didn't even notice'.

At one point, Lennon leaned over and asked Schilling to deliver a message to Elvis. 'He said, 'I didn't have the nerve to tell Elvis this last night', Schilling recalls', 'but you see these sideburns? I almost got kicked out of school for trying to look like him. Tell Elvis that if it hadn't been for him, I wouldn't be here'.

Later, back on Perugia Way, Schilling found Elvis sitting alone in the den where the Beatles' evening first started. 'I didn't tell him right away that I'd just spent the day at their place', says Schilling. 'Elvis was a nice guy, but loyalty was very important to him. I built up to it slowly, then told him what John had said. He didn't say anything, but he had this little proud smile on his face. I could see how much it meant to him'.

In the years since that August night, just a few unofficial photos have emerged, shots taken at the Perugia gates, most likely by a fan, as the Beatles appear to be leaving. The encounter lives on as a cherished memory for those lucky enough to have been there, but Esposito has come to question the occasion's no-photo policy. 'At the time, it seemed like the right thing not to have pictures or recordings, to let these guys just be themselves. But now I kind of wish we could have had some pictures taken, because it really was a helluva night'.

CHUCK CRISAFULLI is an L.A.-based writer whose books include Me and a Guy Named Elvis (George Klein).