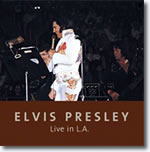 Elvis Presley Live in L.A. is a combined FTD book and CD release mostly based around Elvis' Los Angeles 11th May 1974 performances, particularly the evening show. The photos come from the Sherif Hannah collection and the soundboard contains most of Elvis' 11th May 1974 evening show + 'You Can Have Her' rare performance from an audience recorded source.

Before I purchased this package, the cost was a delaying factor in me being able to afford it, but let's see what I got for my money.

As a complete show for the period, it's decent enough with a standard set list for the time. Pretty similar to the 19th June 1974 show we had with the Rocking across Texas FTD book. The last 3 tracks come from opening night of the tour in San Bernardino on 10th May 1974.

The CD I played whilst browsing the book, and from the opening sounds I could tell that the sound quality wasn't the best. Throughout the CD, Elvis' voice is clear, as well as the bass sounds dominating. Elvis extends 'Love Me' to feature J.D. Sumner's voice and starts putting out in this show from 'Steamroller Blues' onwards.

A nice touch happened as Elvis begins 'Funny How Time Slips Away', which he starts again mentioning that Led Zeppelin are in the audience so they have to do it right. Unlike the afternoon show, Elvis changes words during the 'An American Trilogy' performance which lessens its quality. Otherwise this routine show is pleasant enough to hear without anything special.

That is until the 'premiere' performance of 'BIG BOSS MAN' from San Bernardino. This has a nice slow pace that is ultimately SO COOL, that it becomes my immediate favourite track and justifies my listening straight away - what a highlight! The 'bonus' audience recorded track from the A/S in the same venue is nice to have, but at the same time sounds exactly like bootleg sources and appears no audio restoration work was done at all?

The hardback book comes with a nice chocolate border around many of the photos in its 135 pages. Containing hardly any text, besides an introduction and CD track listing, we're into the 12 different photo sessions featured in the book. Long Beach 7th June 1956 opens the book, then 8th June 1956 in Los Angeles, then again in L.A. on 28th (gold suit) and 29th October 1957. We then jump to 14th November 1970 A/S + E/S where he looks brilliant! April 23rd in Los Angeles, then 11th May 1974 A/S and 69 pages from the show featured on the disc. Finally we get Long Beach 25th April 1976 A/S + E/S, and also Anaheim 30th November 1976. Here the photo on page 126 is superb and compared to Long Beach, Elvis looks fantastic in Anaheim and clearly enjoying himself.

The 50's shots are of course great, and so are the 1970 ones. The three 'peacock suit' ones from the 11th May 1974 A/S reveal Elvis in good form, with the bulk of the book's 110 photos coming from the evening performance. Unfortunately many of them are so completely out of focus, if they had been missing from the book, it could only have enhanced it! However it's the highlights on pages 34, 65 and 84-87 that are the best, with all the others falling into 'mediocrity'. The cover book shot being another good one.

Unfortunately both the A/S and E/S pictures from Long Beach in 1976 show Elvis as a very fat man. The centre 2 page spreads starting on pages 108 and 117 are such revolting photos, they make me feel ill just looking at them. Thus it's with great relief the book ends with photo highlights from a very good show Elvis gave in Anaheim on 30th November 1976. These 15 photos are nearly all good and show the man looking so much better than in April 1976.

All in all, with at least one quarter of the photos seeming in such poor quality that they drag the standard of the book down, I can only rate the overall package as 6/10. For myself, I would have got rid of maybe 40 of the worst photos, and included a double CD with the second disc being the Anaheim 1976 show (which WAS a very good show!) Nearly all those bloated 25th April 1976 E/S show photos could be axed and maybe this would have brought the overall price down from what is still a very expensive package! If I had to choose between Rocking Across Texas or Elvis Presley Live in L.A. I'd be buying the Texas book as this L.A. book is only for die hard fans with cash to spare!