The new CD from the Venus Productions label 'Welcome To The Jungle : Solitaire' contains every available takes of 'Solitaire' and 'Moody Blue' including the undubbed master take, and a different mix of 'Solitaire'.

The first both takes of 'Solitaire' is interrupted by Elvis as he simply didn't get it right ... 'blew it!' (after take 2). Both takes last each for about two minutes. Both takes are also unreleased. Take 3 is the one you can find on FTD's by now best selling CD 'The Jungle Room Sessions', but here you get the intro. So it isn't simply lifted from that one. Takes 4 and 5 are missing. It's quite likely that these are only false starts.

Take 6 and 7 are the ones we do have on 'Made In Memphis' noted as only take 7. It includes Elvis comment 'Gonna kill Neil Sedaka when I see him'. It reminds me on Elvis light-hearted comment about Billy Swan on the last Venus release 'Christmas Today'. Take 8 is complete and unreleased. The take runs 4:39 minutes.

Take 9 is a false start. Elvis breaks down the cut while cursing 'God damn son of a bitch!'. On take 10 there's a tape cut after a few seconds. Take 11 is the undubbed master as we know it from 'Our Memories Of Elvis'. So it isn't a real undubbed recording at all. The different master mix could be found on the Album 'Always On My Mind' from 1985. It represents the song in the sound quality as presented by RCA then. In comparison to the sound quality of the outtakes the RCA mix sounds disastrous. Where the outtakes on 'Welcome To The Jungle - Solitaire' sound fresh, clear and very differentiated. A better and more tasteful dubbed master wouldn't have changed the world, but it would have shown that Elvis sung the Sedaka tune beautifully.

The other song from the 'Jungle Room Sessions', Venus presents on this CD is 'Moody Blue'. It wasn't a typical Elvis Presley song. In fact - imo - it was the total opposite of it, with that disco like rhythm.

All in all Elvis needed ten takes to nail it.

The first take we get presented with from the 'Moody Blue' sessions is take 3. It's unreleased and the tempo differs a little bit in comparison to the master. The following takes 4 and 5 are complete too. Take 4 was unreleased before. We had take 5 before on FTD's release, but there it was wrongly listed as take 3.

Take 6 was released before on FTD's 'Made In Memphis', but Venus presents the count-in.

According to someone with knowledge we got take 7 (italian version) on FTD's 'Jungle Room Session' even so it wasn't listed. Takes 8 and 9 are only short false start. The source for the undubbed master was an acetate in mono-sound. We got that before on different bootleg compilations. The CD concludes with the master take.

The 16-page booklet has several nice concert pictures from March 1976, as there isn't too much photo material apart from the concerts. It includes well written liner notes. The picture CD is just a matter of taste.

However the content is unbeatable! Even Ernst Jorgensen said about the FTD release, that the 'Jungle Room sessions is the one I like the most, because it was possible to make Elvis sound a lot better than I thought he did at the time. So that was a personal triumph in a way'. I don't tend to wear rose-colored glasses, but I like to say in the end that Elvis really doesn't sound as bad as one could think when you've read Jerry Hopkins biography about Elvis. Possibly he wasn't as focused as he once was, but he tries hard to give his very best and in my opinion he didn't fail! 'The Jungle Room Sessions' produced some real nice - undubbed - gems, that were ruined through those tacky overdubs done by Felton Jarvis.

To conclude one must have to admit: it's not the Elvis from the 50s, 60s or even from the early 70s, but it's Elvis! He doesn't sound as good as he did in prior years, but he sounds nonetheless very good. In addition these sessions are historic for Presley fanatics. The sound quality on all outtakes is simply breathtaking.

Last but not least we get roundabout 15 minutes of unreleased outtakes plus unreleased bits and pieces. If one is looking for the real fly-on-the-wall feeling, here you'll get it. Don't miss the chance to listen to this recordings in this quality. This one is a real keeper and highly recommended! Bring 'em on, Venus. Well done!

Welcome To The Jungle - Solitaire

Venus Productions will soon release a new CD, carrying you back in time, right into Elvis' den, known to everyone as the Jungle Room. Welcome To The Jungle - Solitaire will be released in a very limited quantity.

Welcome To The Jungle - Solitaire is a wonderful compilation of released and unreleased tracks recorded in February 1976. ' There was a man, a lonely man....' is certainly a line the rock singer had on his mind during those early February winter nights behind Graceland's walls, and he felt Neil Sedaka's song could work very well for him. On this CD you can hear the progress from the very first take through the master take.

Review : Welcome To The Jungle - The Last Farewell CD 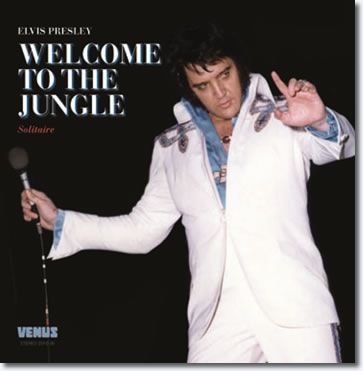 The following night Elvis seemed to enjoy himself while recording what would become the title of his very last album. The song Moody Blue had a very modern sound for early 1976, very disco-like and it had a fair amount of air play all over the USA in late 1976 and early 1977. Elvis is clearly having fun recording this number, yet he ignored to include it into his live appearances, excepted for a brief attempt on February 20, 1977 and finally had a go at it the next night for his first and only performance .

The excellent sound quality will bring you right into the action that happened in the jungle room when those songs were being recorded. The CD will be presented to you in a standard jewel case, completed with a beautiful 16 page booklet. This is a great follow-up to Christmas Today so don't miss it and get your order in today!!! Welcome To The Jungle - Solitaire will be released in a very limited quantity.