Venus now presents their second release with recordings from Elvis' last studio sessions on 'Welcome To The Jungle : Never Again'. The CD contains every available take of 'Danny Boy', 'Never Again' and 'Love Coming Down' including the undubbed master take and last but not least the dubbed master takes. The CD comes with a nicely designed 16-page booklet and perfectly written liner notes.

So we return again to the 'The Den' - better known as the 'Jungle Room' - listening to the recordings from February 5 to February 7, 1976. The CD starts with take 5 of 'Danny Boy'. You can hear Elvis giving the order 'gimme a key!'. The take ends after 1.46 min. Elvis obviously wasn't very comfortable with the key when he had to sing the high notes. Therefore he changed to a lower key. Take 6 is next and Elvis struggles at the same point and interrupted himself after 1.26 min. For the next take he changed the key once more. Elvis interrupted take 7 exactly as he did on take 6 clearing his throat and commenting 'I got to much sh*t in me. I'd like to do it in C. That's where I'd like to do it better.' The sound quality on all three takes is very good.

Take 8 was released on FTDs 'The Jungle Room Sessions'.

Take 9 was previously released on 'Platinum' (CD 4). Neither take 8 nor take 9 can compete sound wise with the source used by Venus. The sound is simply i-n-c-r-e-d-i-b-l-e! It's like having Elvis in your room sitting next to you! Take 10 is the well-known mastertake without overdubs.

Then follows 'Never Again' from the midnight recording the next evening. Elvis seems to be in a good mood as he light heartedly interrupts take 1 after a few seconds 'Men, may you pay attention... you are in a studio... get loose!' You can hear Ronnie Tutt commenting to it, that a take had been 'all drums'. Elvis thought that Ronnie Tutt said 'drunk' and remarked jokingly 'I can get drunk now, man. You g*ddamn bum, you don't know where you are at. Bring out the booze! ... Grandma!' Grandma Dodger lived in a room just beyond the kitchen, which was next to the Jungle Room. The takes 2 and 3 are only a few seconds long, but include some nice conversation between Elvis, the musicians and Felton Jarvis.

Take 4 was the first serious attempt to sing 'Never Again' and is complete. Elvis finished it with the remark 'Right!' commenting that he wasn't to unsatisfied with it.

Take 5 starts right after take 4 is also a complete and beautifully sung take.

Take 6 is next and ends after 40 seconds.

Take 8 ends after twenty seconds with Elvis discussing a part of the song.

Take 9 is a complete and powerful take. Elvis is more focused on this one as he was on take 7 and 8.

All the takes from take 1 to take 10 of 'Never Again' are completely unreleased which is quite sensational nowadays. More than that: the sound quality is pristine and nearly perfect!

Take 11 was previously released on 'The Jungle Room Sessions', but once again the sound quality on 'Welcome To The Jungle - Never Again' is far, far superior to the FTD release!

As take 13 is missing for unknown reasons take 14 is next and this is the undubbed master. It was released before on different other bootleg releases like 'Our Memories Of Elvis', 'Tiger Man - Alternate Anthology Vol.2' and probably for the first time on 'Elvis Among Friends'. None of them did offer it in this quality. It's very doubtful that we'll ever listen to a better sounding version of it. It really is that good!

The 'Never Again' part ends with the well-known dubbed master.

The second song from this midnight session was another Jerry Chesnut song 'Love Coming Down'.

Take 1 ends shortly after the start.

Take 3 was released before on 'The Jungle Room Session' where it was wrongly listed as take 2. Once again the bootleg wins hands down in terms of sound quality!

Take 4 was released before on 'Made In Memphis' and - it gets quite boring – again this bootleg sounds much, much better. The second to last track on the CD is the undubbed master which was take 5. It was previously released on some other inferior sounding bootleg releases, like 'Songs To Sing', 'More Pure Elvis' (where it runs to slow) and once again 'Elvis Among Friends'. The sound quality isn't as a good as on the other takes. 'Our Memories Of Elvis' didn't offer the real undubbed masters. Those were the overdubbed masters but with certain channels removed. The CD finishes with the well-known master take which had some strange reverb added. Elvis voice sounds somewhat compressed and distant as the overdubs sounds totally clear. It's quite frustrating to listen to what Felton Jarvis did with the material he had available.

To conclude: In times where FTD seems to lose the track and probably copied a bootleg for their own catalog it is refreshing to have an import label that offers new material - all in all 25 minutes of unreleased takes - in unique and phenomenal sound quality. Highly recommended isn't the right term, not even to say it's a 'must have' would fit. I tell you 'Go and get it - you won't regret it!'

Review : Welcome To The Jungle : The Last Farewell CD 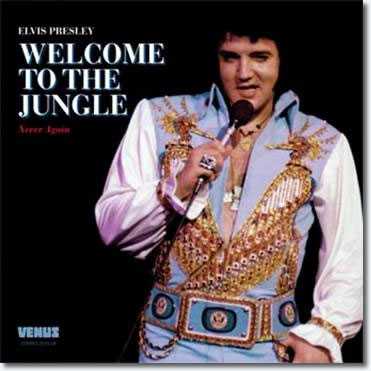