The following article was first published in the U.K. based ‘Elvis Monthly' magazine in 1974, written by Wayne Stierle.

There are a lot of fans, in the states anyway, upset by the new Elvis 45. No, not just the weak showing it's going to make on the charts (as Donny Osman goes many points higher than Elvis
will, and Donny is doing 'Are You Lonesome'. Think a while about that mind twister, if you will). The annoyance is the single sleeve which proclaims an 'Easter Television Special From Elvis'.

The fact is most fans are eagerly awaiting it, and why not? (Unless Elvis decided to convert his millions of non-religious fans and fans of other beliefs to his way of worshiping it'll be great. If he
pulls off a religious trip, well, it'll be interesting to see how the country responds to it).

But, no such thing, folks, and here we go on a binge of phone calls to find out what's happening, or not happening. Come on along!

Surprised by no follow-up ads, I called NBC-Television (NBC is RCA, and Elvis keeps it in the financial family by always doing his thing on NBC). NBC said they never heard of it! I went over the single sleeve with their publicity department and they said it must be a mistake, and indicated that it might be MY mistake? I said, 'Have you ever seen an RCA record? That ended that call. 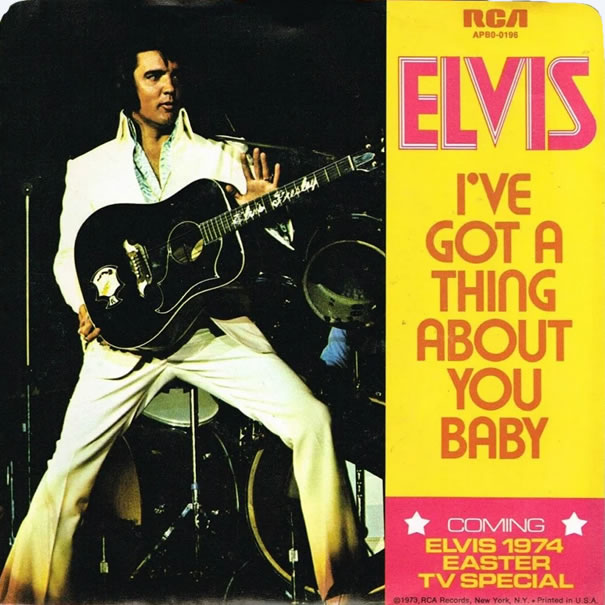 Elvis Presley | I've Got A Thing About You Baby.

Next, I called RCA. Yes, they knew the sleeve and what about it? I told them about the TV Special they're announcing and that their parent company didn't know about it and that it didn't exist even!!!

RCA said, 'Well, it might be a mistake'. After five minutes of going round in circles and being switched here and there, I finally asked to speak to the person who actually put it on the sleeve, OR who actually signed the order prior to running off some hundred thousand sleeves with an erroneous message on it.

I was told that RCA Records didn't know who did it or how it got there? They were nice because they had to be, but determined not to take the blame or shed any light on it!!

By copping out RCA only proved it was a blunder they would not account for. You can't treat everyone like idiots and get away with it. (They try though). So I called Colonel Parker's office in Tennessee!!! After 15 rings on three separate occasions, it was obvious no one was there. (Or putting four flashlight batteries into a $99.95 answer machine. God forbid). I then called the office of Elvis and the Colonel in Culver City, California, at MGM Studios. Here I made one mistake I'm sorry for.

I did not get the name of the man I spoke to. It was not the Colonel, who I've spoken with in person, and I don't think it was Mr. Diskin, but although I might not recognize his voice on the phone. It was a man at least 35 or 40 years old. The conversation, if you can call it that went like this; I introduced myself and listed the many publications I write for around the world, including of course, Elvis Monthly...There was no response at all.

I made a point of then re-pointing out Elvis Monthly and adding that he (the man at the Colonel's office), must be familiar with EM. No reply at all. Nothing, (Now it's 1974 and that kind of thing used to be 'cool' or 'slick' or even something to be impressed by, but no more. Today you're up-front or you're just plain jive and not worth any consideration at all. The day of the plain huckster, at least when we see him is a day of bad memories).

Onward. I pointed out the sleeve and asked why it was. A fair question for the offices of the people who manage the artist on whose record this all appears. The answer came, 'Elvis is touring at that time'.

'Well', I said, 'I know that, but he did the 1968 Special almost half a year prior to it's first run, and do I have to go on? What about this Easter Special?'

Another answer, 'He's touring then and isn't free to appear on television'. I'd have appreciated it more if they'd just called me a stupid dummy incapable of comprehending anything!!! Trouble is, I was getting the message too well.

I asked if the TV deal fell through but I got no answer. I asked if he represented Elvis Presley? He said 'Yes'. I asked how he felt about a single out by Elvis advertising a show that didn't exist!!! He told me again of the damn tour and how Elvis didn't have time beyond that tour. There I had him and suggested that a mere piecing together of film or videotapes of Elvis' show would delight everyone.

He told me about the documentary movie. I told him about 'That's The Way It Is' which came before the film he spoke of and further pointed out that it had little, at this time, to do with television. He countered by saying the 'live' thing has been 'done already' in the film. I suggested using different songs, thereby giving it a different complexion. (I was already heading for the conclusion of this farce, and he was just selling a slab of beef or a pair of shoes. Only the item, in this case, was the King of Rock ‘N' Roll, and my indignation with this man was rising rapidly, but I resisted the urge to be anything other than
polite, wishing to see if he'd tumble into his own trap.)

I went into the thing about the 'live' shows being taped or filmed again. He went against that as a good idea, again, based in the movie. Now I simply told him something he didn't seem to know. Elvis' Aloha From Hawaii Via Satellite show was really a concert, a 'live' one, and the LP nothing more than a 'live' album and not much stronger than some other 'live' LPs and yet a monster to top all monsters. That did it, of course. There was no comment. I asked for one. He asked me if I wanted a list of the cities in the tour. I said no thank you and that was that.

Then, from a source, I cannot reveal (or lose it), I found out that the 'promo words' had come from Colonel Parker's office to RCA in the time between late October and December of '73. The sleeves were printed before plans changed, when, for some reason, the thing fell through, putting Elvis back on the killer road tour instead.

RCA could have prevented the sleeves being issued, which I found by a simple look at when the tour was set as opposed to when the single was shipped. They didn't and maybe 50,000 to 200,000 or more Elvis fans are irritated no end. There was a time when '50,000,000 Elvis Fans Couldn't Be Wrong', but today, between management and record outlets, it's '50,000,000 Elvis Fans Be Damned'.

I don't know man, but it didn't start out like this. Elvis, where are you? The whole world is waiting for the sunrise. Still, there is no breed of person more tolerant than an Elvis fan.