As part of the promotion for the Elvis By Request CD, Sony Music Australia organized the 'Elvis By Request Concert Tour' with Anthony Petrucci as Elvis. I went along to the Melbourne concert on Friday November 1 to see what it was really like. Firstly the show was not an impersonation of an Elvis concert, nor was or is Anthony Petrucci what I would call an Elvis Impersonator. No more than Kurt Russell is in being an actor in the movie, 'Elvis'. So, that said, on with the show ... To a virtually packed house Anthony Petrucci performed songs that are on the CD release starting with those nominated by members of the audience by filling out a form pre-show. The show had two sets with an interval and Anthony used the changes plus one other to use three sets of stage costume, two 50s Elvis style and ending with the '68 Comeback white suit, all looking excellent.

To my surprise I must say I enjoyed the show. 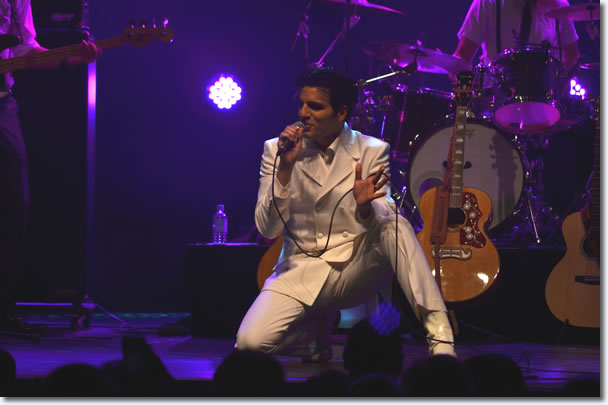 Anthony sang and performed well and indeed not only promoted the CD, served Elvis' memory well as a fan fortunate enough not only to be able to sing well, but come across effortlessly sounding a lot like Elvis on almost every song, with A Little Less Conversation getting I think the biggest response as people quickly recognized the music and indeed Anthony's performance was quite remarkable. Before I conclude, I would like to add that Anthony has developed an interesting 'trait' of 'Elvis jokes', that weren't, you recognize them clearly but the words are completely different and original which is a big plus to his performance.

The show ended with the top ten songs as voted by the Australian fans, 10-1, ending with An American Trilogy.

So to conclude, if you are at all interested in live shows, even if you are like me and don't normally go for impersonators, consider giving this a go. The shows are mostly sold out but there are tickets available..

The Sony stand, selling the Elvis By Request CD and memorabilia. © David Troedson.

Friday November 2 : The Palms At Crown, Melbourne, VIC
Tickets from www.ticketek.com.au or 132 849 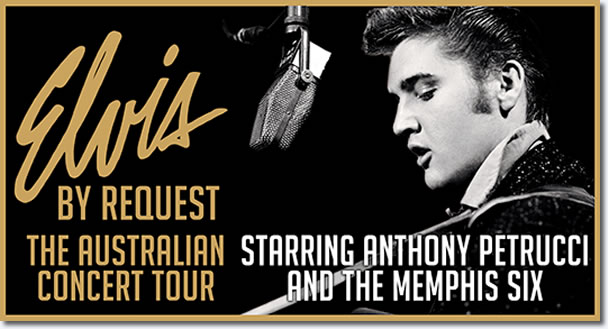