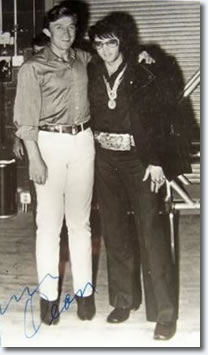 Jimmy Dean: Throughout the years I've been fortunate to have had the opportunity to witness the beginnings of more than one musical legend. Occasionally entertainers that were performing in the Washington, DC, area would drop by WMAL-TV to do a guest spot on our show.

One afternoon, we were paid a visit by a very young and inexperienced Elvis Presley, who was appearing on an excursion boat called the S.S. Mt. Vernon. The boat would make its run from DC, up the Potomac River to Mt. Vernon, where there was an amusement park, and of course the home of George Washington. Elvis was the featured entertainer on the boat that night and was booked on our show to promote the cruise, apparently because it wasn't quite full. I had the excruciating task of conducting the interview with Elvis, possibly the worst I've ever done. It went basically like this:

Jimmy: So, you're gonna be on the S.S. Mt. Vernon tonight, are you, Elvis?

Jimmy: Have you ever worked on a boat before?

Jimmy: I imagine you're looking forward to this, aren't you?

But I'm sure it didn't matter; all it would take would be for the gals who tuned in to that TV show to get a good look at him and he wouldn't have any trouble selling more tickets. Years later, when we were both playing in Las Vegas, Elvis would apologize profusely for leaving me hanging on that interview. He told me, 'You know, Jimmy, I was so sorry about that but I was scared to death'. It's hard to believe that Elvis could be shy or afraid of anything, but I guess even 'The King' had those days in the beginning. 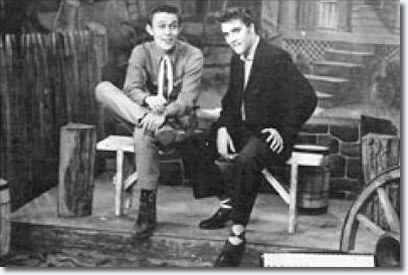 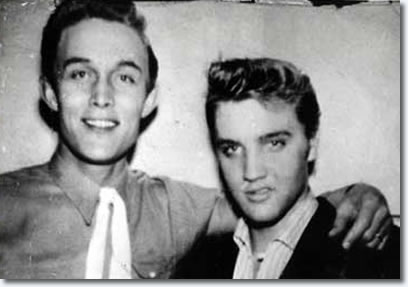 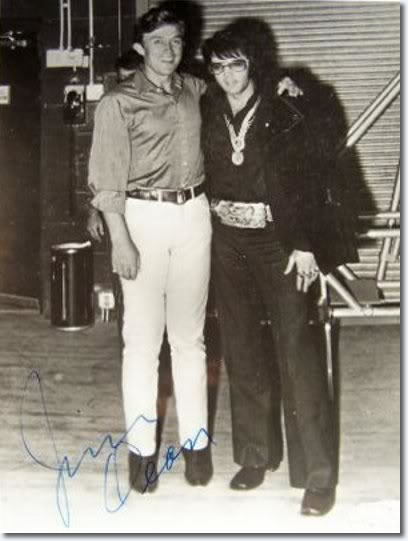 During one stint at the Desert Inn when Dottie West was my opening act, Elvis came in to watch our show and she acknowledged him, introducing him from the stage. Of course the audience went bananas, but she caught pure hell from the stage manager. He told her in no uncertain terms that if there was a celebrity in the house, it was the star of the show who introduced them and not the opening act.

He used to come over quite often when he was working at the Hilton and I was at The Desert Inn. He would come over after the last show, he liked my vocal backing group, they were his favourite singers.

I know that many times I saw him when I was finishing my show, standing backstage. When we sang together it was gospel songs. Sometimes I'd look over and Elvis would be standing in the wings while we were finishing up our show, but one particular night he came in without me knowing it. While at the Desert Inn I would use a wireless microphone when I performed, and that night there was obviously something wrong with the one I had. It kept cutting out, so I said to the sound engineer, 'Can you get me another microphone out here?' I tried continuing with the show while I waited, but no new microphone showed up. I asked again for a replacement, but still no mike. Finally, as I was getting ready to blow a fuse, the audience erupted with gasps and cheers of delight. Unbeknownst to me, Elvis was coming out of the wings and across the stage to deliver my microphone. He said, 'Is this the item you were looking for, sir?' Well, needless to say, the rest my show that evening was shot to hell - Elvis Presley was in the house. I guess it's no secret that Elvis had a passion for acting and movies, and when the movie Patton with George C. Scott came out, he couldn't wait to tell me about it. He said, 'Dean, you've got to go see this movie'. I told him I didn't want to go see it, that I happened to be a big fan of General Patton's and I didn't want to see anybody tear him down for some of the things he did. But I finally did go see it, and it turned out to be one of my favorite films of all time.

After I saw Patton, Elvis was visiting backstage again one night, and as we were talking about it, he went into this monologue from the movie that must have lasted for ten minutes. It was the entire opening scene that George C. Scott performed in front of a huge American flag, and Elvis knew it by heart. He did it well too. I got the feeling it was that kind of role he would have liked to have sunk his teeth into if he'd had the chance.

I remember that Elvis would sometimes call us before the last show of the night and say, 'Hey, Dean, would you and the guys hang around after the show?' He loved to come over to our gig at the end of the evening and sing with my backup vocal group, the Imperials. And anybody who says Elvis couldn't go anywhere without an entourage of bodyguards doesn't know what they're talking about. He'd show up at our dressing room door and it would just be him and a driver. To me Elvis was a person with multiple personalities, because he was somebody one day and somebody different the next. But I used to watch him there with that wonderful look on his face - with no gyrations and no put-on - and I'd say to myself, I don't really know if I know Elvis Presley, but I think that's him, that one there singing those gospel songs.

A lot of times Elvis would cut his show by a couple of numbers and come watch the last part of ours, and then afterward we'd go down to my dressing room. Our piano player Joe Moscheo would sit down at the piano, and Elvis and the Imperials would start singing - nothing but gospel songs and spirituals.

It was during one of those jam sessions that I told Elvis I was having a helluva time getting 'up' for that second show. And it was true, especially during that last week of the month-long contract. My energy level began to wane every night, and I would try to keep going by eating four or five tablespoons of raw honey before each show. I knew that honey was instant energy because it's predigested and the sugar goes right to the bloodstream. I told Elvis that, in spite of eating all that honey, I was still having a hard time, and he said, 'Tell me about it, Jimmy, I know just what you mean. I'll have my doctor call you tomorrow'.

Sure enough, his doctor called the next day and I explained to him what my problem was. I remember his words to this day. He said, 'Jimmy, what you have is the old Las Vegas 'blahs'.

I'll send you over some pills. Just take one about a half an hour before the first show, and then another one before the second show, and you'll be fine'. So true to his word, the doctor sent over these little bitty yellow pills, and that night I took one thirty minutes before showtime. I remember just sailing right through that first show; then I took another pill about a half hour before the second show. Same thing - I was just flying and having a high old time. In fact, the show ran over that night I was having so much fun.

It was usually an every night thing that a few of us guys would go somewhere and have a bite to eat, so after our show ended around one o'clock that night, we set out for breakfast. I used to order things like a bowl of chili with three scrambled eggs in it and a stack of toast with a glass of whole milk, but I noticed that particular night I wasn't very hungry. I had also noticed during the show that I was sweating a lot more than I ordinarily did. Some of us also had a tee time every morning at ten o'clock, and that meant getting to bed so I could get up the next day for our golf game. But when I lay down to go to sleep that night, my heart was beating really hard and my eyes wouldn't close. It was then I said to myself, Dean, you are on drugs! So I got up and found that bottle of little yellow pills, walked over to the john and dumped them in. I really don't know how strong they were, but I would bet that the lid blew off the city septic tank somewhere in downtown Las Vegas.

I'm sure Elvis and his doctor meant well by me, because they obviously thought that pill business was okay, since it worked for EP. I remember he always had a small box filled with pills that he carried around with him - pills of all colors, shapes and sizes - and I really think Elvis thought they could do no harm. And you know, I could understand how people could get hooked on them, because they made you feel so good.., but not for very long. I'll admit to a fondness for wine or a cocktail, but I've had the good sense to stay away from cocaine and all the drugs that have been the bane of many a performer.

My youngest son has got it, holster and all. It's the only thing that I ever got when I knew Elvis that he signed. The only thing. I don't know what made me think of doing that. When he gave it to me, I said, 'Okay, but will you sign it for me?' and he did. That's the only thing I have from him that is signed and I have robes and watches and necklaces and things and junk and so on from him. 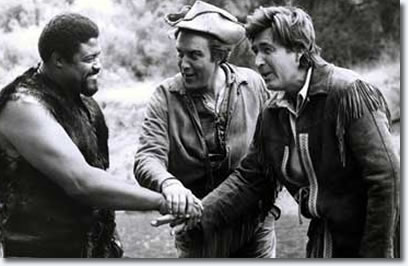 Rosie Grier, Jimmy Dean and Fess Parker on the set of the Daniel Boone Show.