American martial arts man Bill 'Superfoot' Wallace who was Elvis Presley's bodyguard and personal trainer from 1974 until his death in 1977 recently talked about his times with the King and gave a rare glimpse of the man behind the legend.

It is safe to say that Bill 'Superfoot' Wallace was one of the biggest names in the world of martial arts in the 1970's and 80's but he also gained some additional mystique as one of Elvis Presley's karate instructors, as the King was an ardent fan, even once flying in an acupuncturist to treat Wallace at Graceland following an injury to his leg. Bill 'Superfoot' Wallace retired as the undefeated Professional Karate Association (PKA) Middleweight Champion after defeating Robert Biggs in a 12-round bout in June 1980. The victory, his 23rd straight, signaled an end to an illustrious fifteen year career in tournament and full contact fighting. Known to the karate world as Superfoot, symbolic of his awesome left leg, which was once clocked in excess of 60 mph, Superfoot left a string of battered and bruised bodies along the martial arts fighting trail. He used his foot as others would use their hands, faking opponents with two or three rapid kicks and following with one solid knockout technique. His power, speed and precision were astounding.

How did you come to meet Elvis?

I was probably 24 or 25 years old and was doing graduate work at the University of Memphis (then called Memphis State University) in Tennessee. I was already the national champion, and my kickboxing career hadn't started yet.

One of the reasons I'd gone to Tennessee to open a martial arts school for somebody else, but the school had closed. So I went over to Kang Rhee, who ran a large school in Memphis, and introduced myself. He recognized me and offered me a teaching position. Thank God he was there because otherwise I'd have been hurting. In addition to showing his students how to fight, I had to learn all his forms and techniques, but I didn't mind because I really enjoyed teaching.

One evening when I was working out, in walked Elvis and Priscilla Presley. Kang Rhee stopped the class and asked everybody to sit down, then introduced me to Elvis Presley. He said he'd seen me win the U.S. championships in Dallas, where I knocked out Skipper Mullins, and complimented me on my kicking. We talked for about 10 minutes and I thought, Wow, that was fun, thank you very much. Elvis Presley just dropped by to say hello and didn't work out or demonstrate anything. It wound up being the easiest job interview I ever had.

And you worked as a bodyguard for Elvis?

Yes, not long after that first meeting Elvis asked me to come work for him. 'He was a wonderful person, a nice guy. It was fun working out with him too but you couldn't hit him too hard. You couldn't punch Elvis in the face but it was fun beating up his 'Memphis Mafia'. He was very good at martial arts, he worked out very hard. I can't think of a better person to publicize martial arts!'. 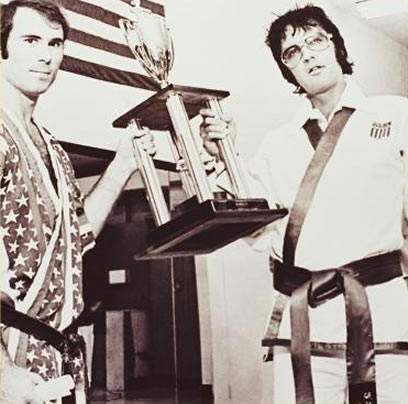 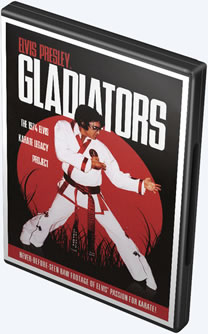 Elvis had a good sense of humour but also had short fuse. 'He could crack the jokes like the rest of us but he had a temper. I remember he bought a 1974 Pantera, an Italian sports car, and he asked us to go along to see it. It wouldn't start and he jumped out and came back and emptied a 45 automatic pistol into it - it still didn't start. It was hilarious'.

Elvis also gave Bill a station wagon in 1975. 'I kept it for a year, then I traded it in. I didn't know he was going to die the next year and when I became world champion in 1974 he gave me a motorcycle'.

'We used to go to the movies on a Saturday night, downtown Memphis, around 15/20 of us. The last one we saw was 'Bring Me The Head of Alfredo Garcia'.

About two years later, he said he wanted to open a karate school in Memphis and would like me to run it. Also wanting a place to train, he said he'd stop in once in a while and work out - with me.

Basically, Elvis was doing self-defense techniques because he couldn't spar - it was simply too dangerous. He had to preserve his looks and voice, so contact to the face or neck was out. He also didn't want to risk breaking any bones, so he'd just demonstrate self-defense moves and some Ed Parker stuff like taking full-power shots to the stomach. I'd throw kicks at him, but I knew I couldn't hit him.

Elvis was a fine athlete, but he wasn't a fighter because of all the restrictions that came with his career. That doesn't mean he wasn't able to fight, though. His technique - his side kick and his punches - looked as good as anybody else's. He wanted to do karate because he'd learned a bit of it in the Army and really liked it. When he came back, he got with Ed Parker because he was the big name in the late 1960s. With his fame, Elvis could go right to the top guy.

Beating up The Memphis Mafia

The best part for me was beating up all of Elvis Presley's people. I just relegated them to pulp. I sparred with Red West, Sonny West, Jerry Shilling and others. They worked out with us, but they only trained because Elvis Presley did. Red West made black belt under Ed Parker, so he was more serious. It was fun kicking Red West.

When I won the championship in September 1974, Elvis Presley presented me with a motorcycle and did some really nice things. I worked at the school until 1977 when he died. Then I was hired to start a new program at the University of Memphis. I taught karate, judo, wrestling and helped out with boxing.

Where were you when you heard Elvis had died?

Elvis In Karate Hall Of Fame